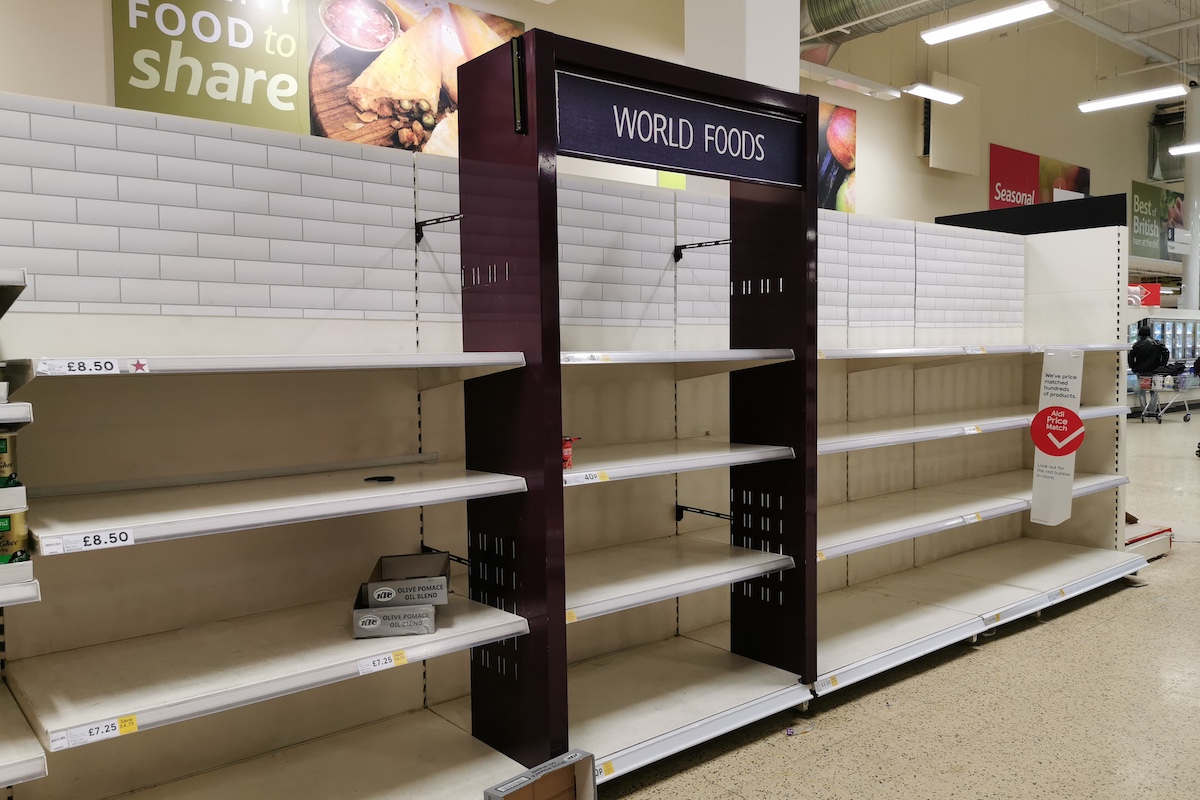 The rush to early Christmas shopping has caused a new shortage of essentials on UK supermarket shelves. The government’s response includes advising Britons to put on more clothing to make up for the lack of heating gas.

These are not images usually seen in a rich country, but after the lack of fuel, the shelves in British supermarkets are now again empty, as they were in August.

Images of stores in London multiply no milk, bread or soda. An Asda store in Cardiff also had nearly empty fruit and veg sections, as well as parts of the frozen food section.

This time, the British are already storing purchases for Christmas, which is intensifying the crisis caused by the lack of truck drivers that resulted from Brexit. In recent days, the Iceland supermarket chain revealed that the sale of frozen turkey meat soared 409% for September 2020, due to “food supply concerns” for the festivities.

According to Richard Harrow, chief executive of the UK’s Frozen Food Federation, many consumers “converted permanently” to frozen food during the pandemic, which saw a “rapid” increase in sales. “This combined with current concerns about food supply means that many people will opt for frozen turkey this christmas“, reveals to Express.

Conservative President Oliver Dowden has promised in an interview with Sky News that there will be turkeys available by Christmas as production issues are being resolved. “Let’s make sure people have turkeys for Christmas. I know that Environment Secretary George Eustive has this as a priority”, he said.

This crisis has been dragging on for a few months now, but the rush to supermarkets in preparation for the festivities has intensified it. According to data from the Office of National Statistics, between 22 September and 3 October, eight million british could not buy essential food.

A survey by The Grocer also shows that a third of respondents already started buying food for Christmas or else I was hoping to start shopping at the end of October.

Two-thirds are also concerned about the scarcity of festivities and the number of calls for supermarkets to collaborate so that no more pressure is put on a system that is already in crisis.

With each trying to ensure they keep their shelves stocked, supermarket chains are now being advised to put commercial rivalries aside in the name of the common good, as the supply network is being underutilized and further aggravate the impact of the lack of truck drivers.

According to the Department of Transportation, 31% of trucks that circulate on the road are completely empty while the average of those with a load is only 60% of full capacity. The government wants supermarkets to collaborate in preparing for the festivities, so that the truck loads can be used to the full.

The situation is so complicated that a network is already weigh rationing some of its products to prevent alarmed consumers from buying too many reserves and intensifying shortages even further.

Supermarkets are also being encouraged to do the Christmas promotions earlier than usual this year, so that consumer demand spreads over a longer period and avoids huge demand in a short time, writes The Times.

“The biggest choice each of the major supermarkets has to make this week is: are we going to have a Christmas according to the law of the fittest, or are we going to work together to try to make it through Christmas? The problem with the crisis is that each one fights for himself, so what we see is businesses struggling to ensure their deliveries and that runs counter to efficient collaboration and coordination,” Shane Brennan, head of the Cold Chain Federation, tells The Grocer.

Tesco revealed that it will increase its use of transport by train by almost 40% and the British press also advances that the bus drivers are resigning to be able to get better paid jobs as truck drivers, which has left some important routes with less public transport available.

“Are you advising people to wear another wool sweater?”

The rise in gas prices is one of the big factors behind this crisis, as the carbon dioxide resulting from fertilizers is used in slaughterhouses and for vacuum packaging for meat.

However, the sharp rise in natural gas prices in Europe has prompted fertilizer producer CF Industries Holdings to suspend operations at two plants in the UK.

Kwasi Kwarteng, the British Energy Secretary, had to step in and promise a short-term bailout to get the American company back into production. Despite this, the country’s Meat Processors Association warns that many slaughterhouses continue to lack a supply of carbon dioxide and that the industry can “go back to square one” this week.

The lack of workers in slaughterhouses has also meant that breeders have to slaughter hundreds of thousands of healthy pigs, as the lack of employees delays the process, with operations 20% below normal, and causes animals to accumulate on farms before going to slaughterhouses.

The National Pig Association revealed to Sky News that at least 600 animals had already been slaughtered and that the number could reach 150,000. “These are animals that we raise, feed, take care of. Kill them when they’re perfectly healthy for later going to waste is criminal“says Zoe Davis, president of the association.

Boris Johnson’s response to this situation was also criticized, after the British Prime Minister said that the pigs would die anyway to become “bacon sandwiches“. The farmers union vice president said Johnson showed a “lack of respect” for the class.

Veterinarian Duncan Bradshaw, who participates in the preparation of the slaughters, called the prime minister’s comments “hugely disappointing”. “Unfortunately, these discussions are around the horrible scenario where we not only have to see when, but also how, we’re going to have to slaughter healthy animals that are then incinerated“, Explained to the BBC.

“The number is a few hundred at the moment. But if we don’t have any movement soon in the accumulation of pigs on farms, we’re going to have to take more drastic actions. He (Johnson) is unable to see the difference between the normal supply chain in the UK and the horrible food waste that happens when we have to kill healthy pigs,” he concludes.

The government’s response to filling the gas shortage during the approaching winter may be to advise the British wear warmer clothes instead of using heating systems.

According to The Times, the suggestion emerged in the British executive’s plans if the fuel crisis continues and ministers may have to publicly tell people to wear woolen clothing.

“Are people being asked to wear one more wool sweater and to wear more socks?” Sky journalist Trevor Phillips asked the Energy Minister. “It’s in people’s hands, it’s amazing how people’s cold tolerance can vary“Kwarteng replied, saying that Brits should ‘have common sense’ and that it is not their role to ‘tell people how many layers of clothing they should wear’.

This whole crisis is due to the departure of workers from Eastern Europe from the United Kingdom, who started to leave the country due to Brexit and that they also returned to their countries after the lifting of limits on travel due to the covid and that they decided not to return to Her Majesty’s lands.

To make up for the shortage of truck drivers, the UK has already moved forward with temporary visas of residence for lorry drivers, it put soldiers to drive the lorries and distribute fuel and sent thousands of letters to those who have a lorry driver’s license to appeal to them to return to this sector and help to respond to the crisis.

According to XTB analyst Henrique Tomé, the shortage of workers is due more to Brexit than to the pandemic. “The UK has been known for many years to welcome immigrants from around the globe. However, at this time, the entry of new emigrants turns out to be limited and quite bureaucratic”, explained to newspaper i.

Paulo Rosa, senior economist at Banco Carregosa, reveals to the same newspaper that “the current shortage of labor in the UK results from a mixture of Covid and Brexit”. “Some sectors need to realize that the days when they had more availability of labor may be over and the employers will have to pay more to ensure available personnel”, he adds.

Despite this, the Conservative Party is arguing that the crisis is not limited to the UK. “The UK is not alone in this. If you look at Poland, the US, other countries, there is a shortage of drivers,” says Oliver Dowden.

Boris Johnson also does not guarantee that the crisis will not last until Christmas and says that the country is going through a “adjustment period” to guarantee higher wages for British workers.

“We are going through a phase where the global economy, particularly the UK economy because of the rapidity of the recovery, is absorb the search very fast“, replied Johnson.

Foreign Secretary Liz Truss adds that empty shelves are not the government’s responsibility. “I don’t believe in commanding and controlling the economy, so I don’t believe the prime minister is responsible for what goes on in the stores,” he says, according to the Telegraph.