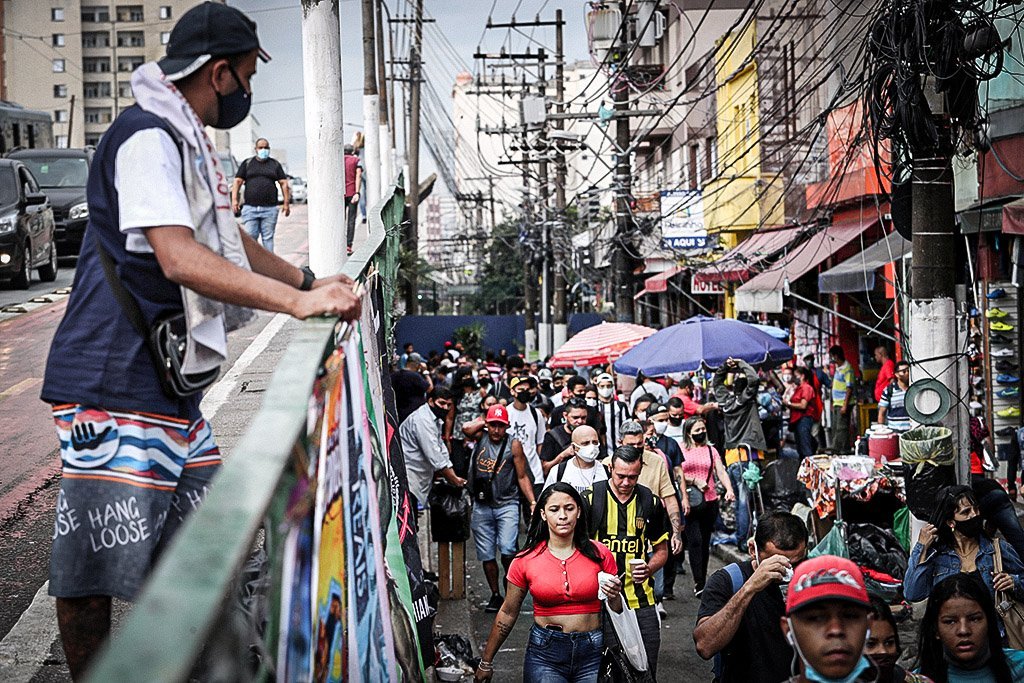 Downtown São Paulo: with the reopening of trade after the first peak of contamination, agglomerations were registered (Amanda Perobelli/Reuters)

The strong increase in new jobs helped Brazil’s service sector to grow in June for the first time in six months and at the strongest pace in nearly eight and a half years, with the hiring of employees, the Managers Index survey showed on Monday. Purchasing (PMI).

IHS Markit said its PMI index rose in June to 53.9, from 48.3 in May, surpassing the 50 mark, which separates growth from contraction.

It was the first time that the service sector PMI, heavily affected by Covid-19’s containment measures, was in expansion territory for the year, recording the strongest pace since January 2013.

“Service companies registered the strongest monthly increase in activity in almost eight and a half years, and there was a new increase in employment as many companies sought to replace workers who had been laid off earlier in the year,” said the associate director of Economics at IHS Markit, Pollyanna De Lima.

“Some companies hope that as more people are immunized… the pandemic will recede and the restrictions will be completely lifted. (But) the pandemic is far from over, in Brazil and elsewhere, with the emergence of new variants and lack of vaccines in many countries raising doubts about the sustainability of Brazil’s economic recovery,” she warned.

According to the interviewees, the advance of the index was due to the improvement in demand due to the suspension of some restrictions adopted against the coronavirus, in addition to the ongoing vaccination program.

Companies indicated a record entry of new work from abroad, with the number of participants reporting higher foreign sales reaching double those reporting a reduction.

As a result, total new orders increased for the second month in a row and at the strongest pace since January 2020.

Both in terms of production and new orders, the highlight in June was the Transport and Storage category.

In line with the growth in demand, service providers in Brazil hired more employees in June, and the increase in vacancies was the strongest since January 2020, ending a six-month period of cuts.

Expectations that restrictions on combating Covid-19 will be further relaxed as vaccination progresses and the pandemic recedes pushed the overall level of confidence in the services sector to a six-month high in June. However, it remains below the long-term average.

The negative point was the increase in input costs, which accelerated compared to May, especially in the prices of food, fuel, personal protective equipment and public services.

Part of this was passed on to customers, resulting in the eighth month in a row of rising prices charged, with the inflation rate lagging only behind those seen in September and October 2015.