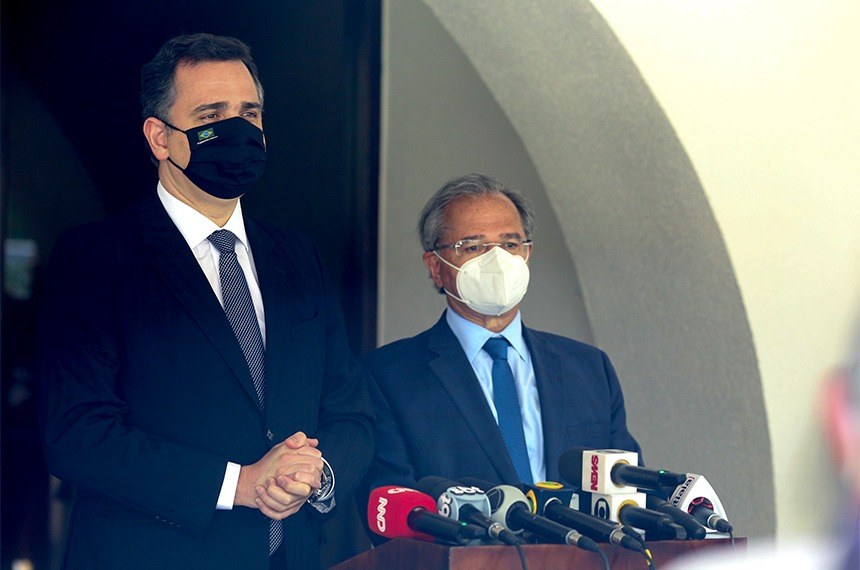 Pedro Gontijo/Federal SenateLegal understanding was discussed between the president of the Senate, Rodrigo Pacheco, and the minister of Economy, Paulo Guedes

The Minister of Economy, Paulo Guedes, and the president of the Senate, Rodrigo Pacheco (DEM-MG) defended this Monday, 30, a legal solution to the issue of payment of precatory of 2022 and the opening of space for financing the new Bolsa Família. The move will be discussed this Tuesday, 31, in a conversation between the senator and the presidents of the Chamber, Arthur Lira (PP-AL), and of the Federal Supreme Court (STF), Luiz Fux. The minister of the Supreme is also the president of the National Council of Justice (CNJ), which should mediate the negotiations. “There is a possibility, which has always been discussed, and which has now evolved, considering that there was a decision by the Supreme Court regarding the mandatory payment of BRL 89 million in court orders, in 2022, that a composition be made, mediated by the National Council of Justice, chaired by Minister Luiz Fux. A solution that we consider smart, possible. The CNJ could really provide this referral”, said Pacheco. Precatório are the debts of the federal government that are no longer available for resources. For next year, the estimated amount is BRL 89.1 billion, compared to BRL 56.4 billion planned for 2021.

The debt, classified by Guedes as a “meteor”, makes it impossible for the government’s projects to boost the package of social programs that should be launched with the end of the emergency aid, in October. According to the president of the Senate, the resolution of the precatoria will also define the future of the new Bolsa Família. “The solution to the question of court orders ends up in another absolutely fundamental solution for Brazil, which is the establishment of an increased social program, which replaces Bolsa Família, which can reach the greatest number of people, with updated value for give these people the purchasing power,” he said. According to the head of the economic team, the legal solution will not impact the government’s fiscal commitment. “I think we are going to reach a good term in this sense of opening within fiscal responsibility, within spaces defined by the government’s own ceiling, making room for Bolsa Família”, he said. The intervention of the CNJ replaces the government’s original plan to resolve the issue of precatório through a Proposal for Amendment to the Constitution (PEC). The text provided for the installment of part of the debts in three bands. The measure was classified by critics as a form of default by the federal government, a term that was rejected by the minister. According to Guedes, the new path will give more agility in solving the problem. “We had tried through legislation, a PEC, but apparently it is a more effective, faster and even more legally adequate solution.”