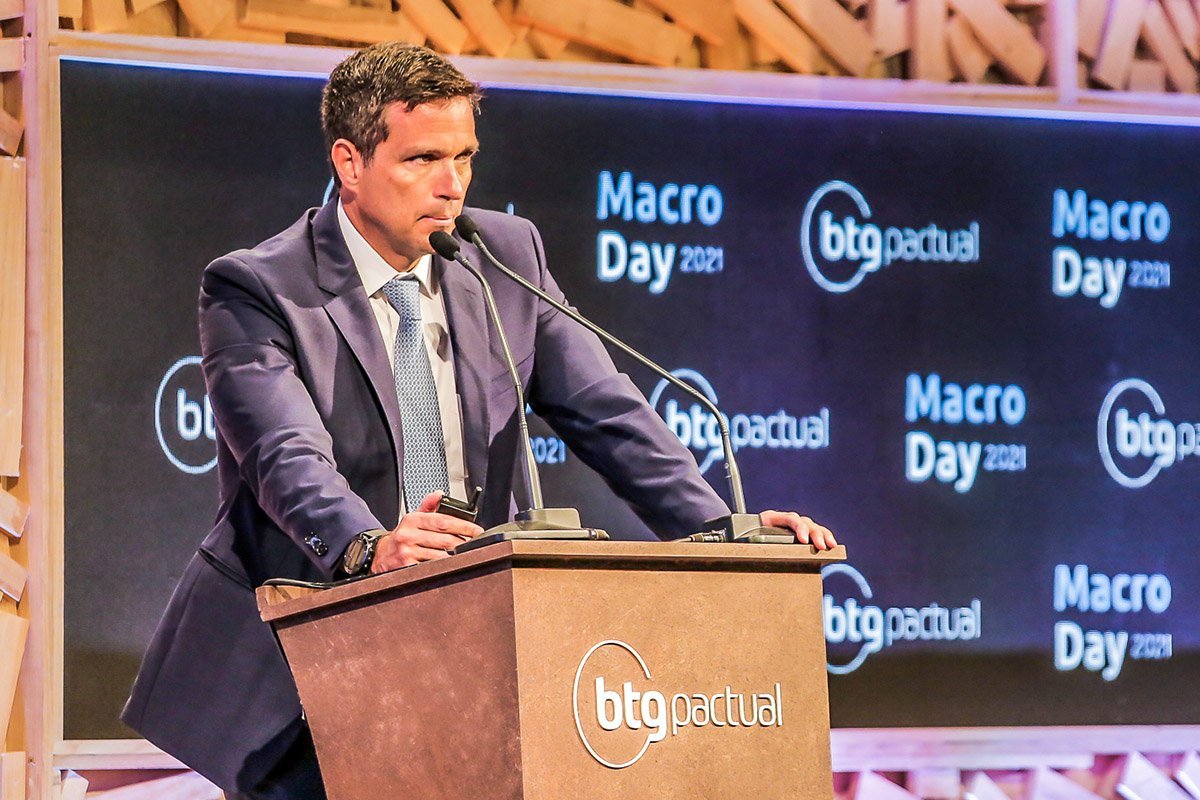 Campos Neto, president of the Central Bank: BC is attentive to inflationary processes, but will not react to the “high frequency” (BTG/Disclosure)

The president of the Central Bank, Roberto Campos Neto, repeated again that the BC will act to control the advance of inflation and that measures are planned. But he claimed that the Monetary Policy Committee (Cup) will not act on each new “high frequency” change.

Campos Neto stated that the BC is monitoring the components of the inflationary process and changes in the short term, but that “changes in the flight plan” will not always occur, whose focus is on a “longer horizon”.

The IPCA, the main Brazilian inflation index, was 9.68% in the 12-month period up to August. Brazil must end 2021 with the worst inflation since 2015, despite unemployment still at around 14%.

The Selic rate is currently at 5.25%, after having started the year at a record low of 2.0%, which made Brazil one of the countries in the world that raised the most interest rates recently.

Market projections already point out that the interest rate may end 2021 close to 8%, and new increases made by the Copom are expected for the next meetings.

In his speech, the BC president also spoke about the supply and demand shocks that have caused part of inflation in Brazil and abroad.

Highs on the services front around the world were already expected with the economic reopening after vaccination, but in addition, inflation continues to be pressured globally by supply shocks, with the production of goods failing to meet demand.

The offer of semiconductors, an important component of electronic products, is one of the biggest examples, with prices breaking records.

Campos Neto points out that this process was expected during the pandemic, with quarantines, but insufficient supply remains a reality even with the reopening and with increasing production.

The big question, says the BC president, is “how much of this is a structural change and how much is a rupture in the supply chain”.

“It is easier to say today that we have something structural going on that has increased demand for these components. This creates an inflationary persistence in these items,” he said.

The bet on the part of analysts was that the inflation of goods would be temporary and would recover quickly. “This is not true. Not only is it not getting better, but it is getting worse in some cases,” Campos Neto pointed out.

“We think that there will still be a normalization, but slower, which makes the inflationary process in a large part of the world more prolonged.”

In Brazil, on fronts such as the commodities, the transfer of high commodity prices seen in the foreign market last year (which has now stabilized) was quickly transferred to the domestic market due to the dollar, which means that the country has already suffered part of the effects of inflation.

“In fact, it seems that the world is in a phase in which we have already seen some of this in Brazil. But we had problems that are our internal dynamics,” said Campos Neto, citing the case of the water crisis.

“We have never had so many consecutive shocks in such a short period of time, the most recent being the water part, which generated additional uncertainty,” he said.

The devalued real also remains one of the main inflationary components, and although it was relatively stable in 2021, the dollar’s price rose by around 30% last year and has never fallen again.

“Much of the flow [de dólar] that left did not return to Brazil, and this is true in other Latin American countries, it went to Asia,” said Campos Neto, who believes that part of the contingent dammed may return. He claims that the BC should act at the end of the year on the exchange front, which is a period that, by technical criteria, is more sensitive in the dollar market.

Campos Neto also spoke about the growth projection for 2022, which is still higher in the BC projection (4.03%) than in the market’s median, which is already close to 2% and below that in many analysis houses.

The BC president said that there is a wave of good news, such as microeconomic reforms, the vaccination that has led to a consistent drop in covid-19 cases and the possibility that Brazil will have a primary deficit close to zero in 2022.

He points out that the upper classes and the business community have returned to levels of confidence close to pre-pandemic, although this is still a challenge for the lower classes, with informal employment not having returned to levels before the coronavirus.

Regarding the rise in the future interest rate curve and the risks on the horizon seen by investors, Campos Neto assessed that practical changes did not translate into an improvement in the view of risk.

As examples, the BC president argues that part of the risk in 2020 came from the view that Brazil was worse off from the pandemic, the fiscal imbalance with emergency aid and governance problems in Congress. This year, he assesses that these three issues were relatively resolved.

“But that didn’t translate into a drop in the risk premium,” he said.

Campos Neto assesses that, once issues such as the value of the new Bolsa Família proposed by President Jair Bolsonaro and the payment of court orders are defined, the confidence of market agents should stabilize and “turn the page”.

“[O mercado] you will see that this balance of risk was not as bad as we expected,” he said. “I think this is a process that will happen.”

In front of BC’s technological actions, Campos Neto celebrated the results of the PIX, an instant payment program led by the institution.

“PIX has not only shown itself to be a replacement for TED and DOC,” said Neto, stating that the tool is enabling new business possibilities. In the future, there is an agenda to implement the international PIX, according to BC planning.

The average value of the PIX stands at 595 reais according to July data, and the transaction volume, which started at 30 billion reais in November 2020, jumped to 527 billion. About 100 million individuals and 7 million entities have registered keys to use PIX.

Regarding the coups that have been reported on the platform, Campos Neto argued that the crimes existed independently of the PIX, but that the BC is working towards improvements.

“[A criminalidade] it is more associated with the opening of the economy than the existence of the PIX”, he said. Campos Neto also defended that security measures made in the PIX could not have been made in some other instruments, such as specific limits, by time and establishment, besides more quick traceability of accounts.