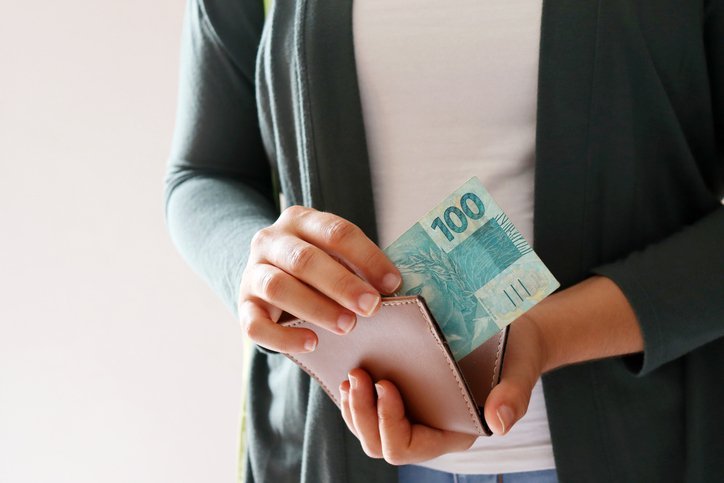 While the price rise in 12 months here is in double digits, the average in the 38 countries of the Organization for Economic Cooperation and Development (OECD) is 4.3% (Brenda Rocha Blossom/Getty Images)

A inflation, which reached 10.25% in the 12-month period up to September, is one of the main challenges facing the Brazilian economy. Widespread, high prices make the population poorer. But the assessment that the government has made is that this is an almost inevitable situation. In his most recent weekly live, last Thursday, the president Jair Bolsonaro he said that inflation is a global problem and called on those who criticize him to present solutions.

The request was accompanied by an attempt to relativize the famine facing the country. Armed with an extensive list – from basic foods to toilet paper -, it showed that Americans pay more for potatoes, soy oil and meat, for example, than Brazilians. “Are you complaining that it’s high here? There it is too. This crisis is all over the world. It’s not just in Brazil,” he said, while blaming the “stay at home” policy adopted by governors and mayors for the soaring inflation to contain the pandemic.

The day before yesterday, in an interview with CNN in the United States, the Minister of Economy, Paulo Guedes, also stated that the problem of inflation is global, and that in Brazil half of the rise in prices is concentrated in energy and food.

Indeed, there is a global increase in inflation, but the situation is much worse in Brazil. While the price rise in 12 months here is in double digits, the average in the 38 countries of the Organization for Economic Cooperation and Development (OECD) is 4.3%.

Estadão heard six economists to respond to Bolsonaro’s request. For them, the government had a fundamental role in the lack of control over prices and may also play a role in the return to normality – mainly by treating public accounts with responsibility. Next, read economists’ recipes for tackling inflation.

The surprise has been negative when talking about inflation in the main economies of the world and especially in Brazil. There are elements that are common to the countries, but there are domestic factors that increase inflation, generating important costs for Brazilian society, especially in the lower income segments. Much could have been done to avoid this picture.

Part of this inflation stems from the pandemic and its effects. In Brazil, there are specific elements that increase inflation: climate issues (drought and frost) and high risk perception in view of the fiscal and political/institutional scenario. The distrust in relation to the sustainability of public accounts and the maintenance of the rules of the game from the institutional point of view increase the risk perception of economic agents and consequently affect the pricing of financial assets, such as the exchange rate. Through the exchange channel, the increase in prices is magnified in the domestic market.

The real has remained detached from its main fundamentals. The explanation is that there is a risk component that markets embed in pricing that is not being captured by the models. In other words, with signs and measures of responsibility in conducting public accounts and respecting the rules of the institutional game, a good part of inflation could have been avoided.

The best action to fight inflation today within the president’s reach would be to reinforce the commitment to the constitutional spending ceiling, after the necessary modification to accommodate the precatory payments next year. This would imply limiting the increase of social programs to the open space under the roof in accordance with the current content of the PEC in progress in the Chamber of Deputies.

Returning predictability to government accounts until the elections would likely cause the real to appreciate significantly, automatically lowering the price of products that are quoted in dollars (fuels, much of food and other industrialized goods) and alleviating inflation. The current dollar price of a barrel of oil (about US$83) is at the same level as in September 2018; Today we only have the most expensive gasoline in history because the exchange rate, which was R$ 4.05 per dollar at the time, is now R$ 5.50, largely due to the political and fiscal turmoil caused by the government itself. .

Another benefit of this action would be to facilitate the Central Bank’s task of controlling inflation expectations for 2022 and 2023. With a more appreciated exchange rate and the maintenance of the fiscal regime, the BC could raise the Selic rate less, which would contribute to a lower cost debt rollover and, in the eyes of the market, less probability of an inflationary outflow for the payment of the bonds.

First of all, it is worth remembering that the Central Bank is alone in the fight against inflation. The country is going through a stagflation process with inflation around 18% projected in the accumulated from 2020 to 2022 and a drop in Gross Domestic Product (GDP) per capita of around 1.3% in the same period.

The pandemic has had important impacts on the economy, and the way out is to control inflation together with conditions for growth.

For this, nothing better than the government to radically change its economic policy, focusing on relevant and specific reforms: joining the PEC (Proposed Constitutional Amendment) 45 and PEC 110 of the tax reform for goods and services, with discussions already advanced in both The houses.

In addition, abandoning the Income Tax reform as it currently stands; as well as forwarding the regulation of article 41 of the Constitution, which deals with the periodic evaluation of the performance of public servants.

This would help growth and productivity and would reverse part of the exchange rate depreciation of the real.

Furthermore, the government should have signaled to the population an adjustment in energy consumption, which could have reduced the need to increase tariffs to the level reached.

None of this will happen, however, and the culprit will remain the government.

The most efficient way to fight inflation, in my view, is the conventional monetary policy, that is, raising interest rates above the neutral level to deflate the inflation that is above the target. It is important for the Central Bank to ensure the control of inflation expectations to prevent the inertial mechanisms present in the Brazilian economy from perpetuating higher inflation.

It is true that the Brazilian economy faces a large number of cost shocks: food, fuel, energy and other inputs (as well as in other regions of the world), but however inadequate it is to combat the primary impact of these supply shocks , it is up to the BC to prevent the secondary effects of these shocks from appearing.

Persistent inflation of services and cores suggests that the secondary effects of primary shocks are occurring and demand that the monetary authority raise interest rates to a level above neutral. The BC has suggested that the appropriate base interest level would be contractionary, which in our view implies interest rates above the base scenario of 8.5%. We believe that the Selic will go to 9.5% to combat the secondary effects of shocks, inertia and promote economic disinflation and return to the trajectory of inflation targets. We do not believe in supply-side policies to fight inflation namely: tax cuts, price controls and/or price cuts and/or freezes.

One of the main factors that pressure inflation is the rise of the dollar, mainly due to commodities (raw materials quoted in dollars). When they rise in the international market, the currency appreciates as a consequence, which reduces the inflationary effects. This was not the case with Brazil, on the contrary, due to political, institutional, but mainly fiscal uncertainties, the price shock was “doubled”.

A significant part of our currency depreciation is related to a premium charged by investors to offset these political and fiscal risks. The government must signal policies compatible with a reduction in indebtedness, avoiding electoral populism with unsustainable aid. There must be clarity regarding the rules of the game and institutions that guarantee democracy. Breakages should be out of the question.

Furthermore, a clear agenda of macro and microeconomic reforms is essential to raise the growth rate and, consequently, attract capital inflows. This process, associated with a vigilant and firm Central Bank, as has been the case, are significant responses to this excess of shocks and high inflation.

The information is from the newspaper O Estado de S. Paulo.