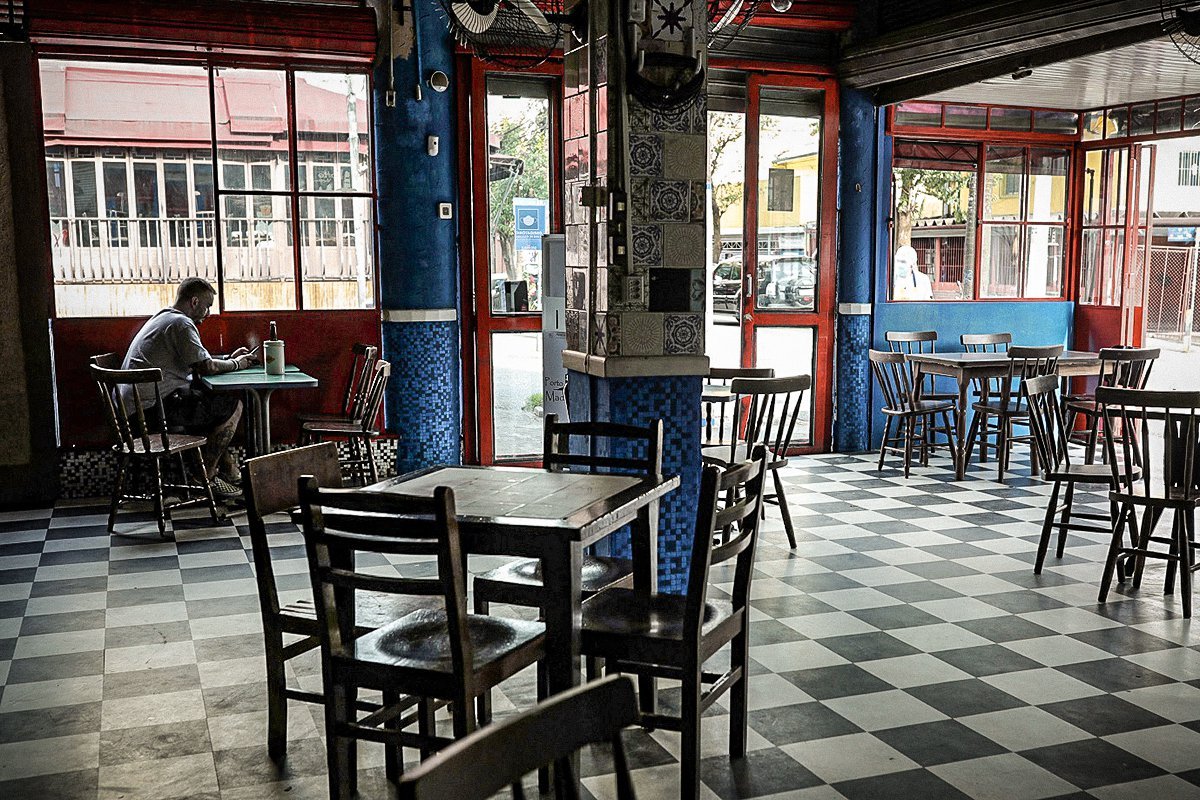 A customer sits in a chair at the table arranged for maintaining social distance between guests at a dining room of a restaurant, as the city eases the restrictions imposed to control the spread of the coronavirus disease (COVID-19) in Sao Paulo, Brazil July 6, 2020. REUTERS/Amanda Perobelli (Amanda Perobelli/Reuters)

The lack of action by the federal government in combating the pandemic is leading companies to relive the nightmare of March 2020. With depleted financial reserves and running out of cash, especially in the service sector – which accounts for 70% of the country’s GDP – companies and experts say that without the return of relief measures, unemployment and closing deals will skyrocket.

Izabel Serra, 54, had to close her restaurant Canto D’Alice, in the Laranjeiras neighborhood, after 27 years. She tried to sell meals using a delivery app, but her turnover was very low.

Without getting credit and with little cash to maintain his team after the suspension of the measure that allowed him to reduce wages and work hours and suspend the salaries of employees, he chose to dismiss part of them last year.

– Of all the crises, this was the worst. There is no bank, no help, no loan, prices have risen and there is no way to pass it on to the customer. The owner (of the property) even offered free rent until the end of the year, but it is not worth it. We are abandoned – laments the businesswoman who is selling furniture and equipment in the restaurant to pay for terminations.

As the resumption that was taking place in the last semester was reversed by the resurgence of the pandemic, with the imminence of a new lockdown, the companies ask for the return of the Emergency Program for the Maintenance of Employment and Income (BEm), the extension of the deadline for payment. loans granted via Pronampe (a line of credit with lower interest rates created in the crisis) and installment payments of taxes.

The Ministry of Economy is working to resume measures, still with no prediction of when they will be implemented.

– The “V” recovery was aborted by the second wave (of cases). It would be necessary to have a new round of stimuli because the blanket is short and there will be no cloth. But they will not come in the same proportion. The consequences are already visible: defaults are rising – warns Luiz Rabi, economist at Serasa Experian.

The government’s slowness in bringing the 2020 measures back, experts say, inflates the damage to Brazil’s economy. Since the beginning of the pandemic, 300,000 bars and restaurants have closed, cutting one million jobs.

Almost 80% of companies in this segment say they will close operations if there is no BEm reissue, shows a survey by the Brazilian Association of Bars and Restaurants (Abrasel).

– Now, businessmen are facing the expiration of Pronampe loans and no cash. In February, one in five businessmen was in arrears, ”says Paulo Solmucci, president of Abrasel.

In the Center, the worst situation

On Friday, the entity managed to obtain an injunction in court to reduce the restriction of hours to operations of bars and restaurants decreed by the City of Rio the day before. But the injunction was revoked. Entrepreneurs ask for compensation, such as suspension of power cuts and ban on eviction due to rent delay.

Centro do Rio is the micro-region that faces the most delicate situation, as many office employees are in the home office. The owners of DarkCoffee, which is close to the Olympic Boulevard, have even suspended the employee contract, but now they do not know how they will pay the wages:

– At the time it was a good measure, but as I have to keep employees for the same period of the suspension and the movement has not returned to normal, it is weighing on my pocket. The situation is already hitting the neck, we can hold on for six months at this rate – says manager João Barreto.

Rubens Massa, professor at the Center for Entrepreneurship and New Business at FGV, points out that the government is slow to announce aid:

– In small companies, it is death by starvation. They have nowhere else to turn and have already burned reserves. The effect multiplies because each unpaid debt is a supplier that stops receiving.

In retail, the situation is repeated. In 2020, 75 thousand stores closed their activities in the country. In Rio, not even year-end sales or credit saved stores and, in January, there was a 15% drop, compared to the same month in 2020, according to CDLRio and SindilojasRio.

Jaqueline Karina Bispo dos Santos, 35, and her husband sold clothes at a fair in Tijuca, a source of family income. With a drop in the movement, she stayed five months, had to negotiate debts with the organization of the fair. This year, after customers, he set up a store in a trailer that he has in Grajaú.

– I had to get a loan and buy two credit cards to do the tour because I had no cash. With the vaccine, the expectation was that it would improve, but look how it is ….

For Fabio Bentes, economist at the National Trade Confederation, it is necessary to help companies, with attention to services:

– This year, the industry will turn to export, while trade can hold on to selling online. But what about services?

In Rio de Janeiro hotels, occupancy dropped by half in the summer, to 40%, says Alfredo Lopes, ahead of the Rio de Janeiro Hotels Association. He points out that the hotels have already used all resources.

Eduardo Seixas, director of company restructuring at Alvarez & Marsal, points out that there are large companies that have emerged strengthened from the crisis. And, on the whole, government aid in 2020 pushed forward the explosion of requests for judicial reorganization:

– This movement should come this year. We estimate a 53% increase in requests for judicial reorganization. Even companies that solved obstacles will die on the beach in the face of the worsening pandemic, depending on what will be announced by the federal government.

Waiting for the vaccine

The consultancy expects the number of recovery requests to rise to 1,800, returning to the historic high of 2015 and 2016.

– We depend on the approval of the Emergency PEC and, of course, the vaccine – says Silas Santiago, public policy manager at Sebrae.

The PEC, which unlocks the payment of emergency aid, passed the Senate and is expected to be voted on in the House this week.

Santiago stresses that the birth of companies grows, pointing to entrepreneurship out of necessity. In 2020, there was a record high of 16.27% in new registrations of individual microentrepreneurs (MEI), or 2.965 million. In January, the increase was 21%, with 312 thousand new MEIs, against the same month last year. In February, it rose more than 30%, with 276 thousand.