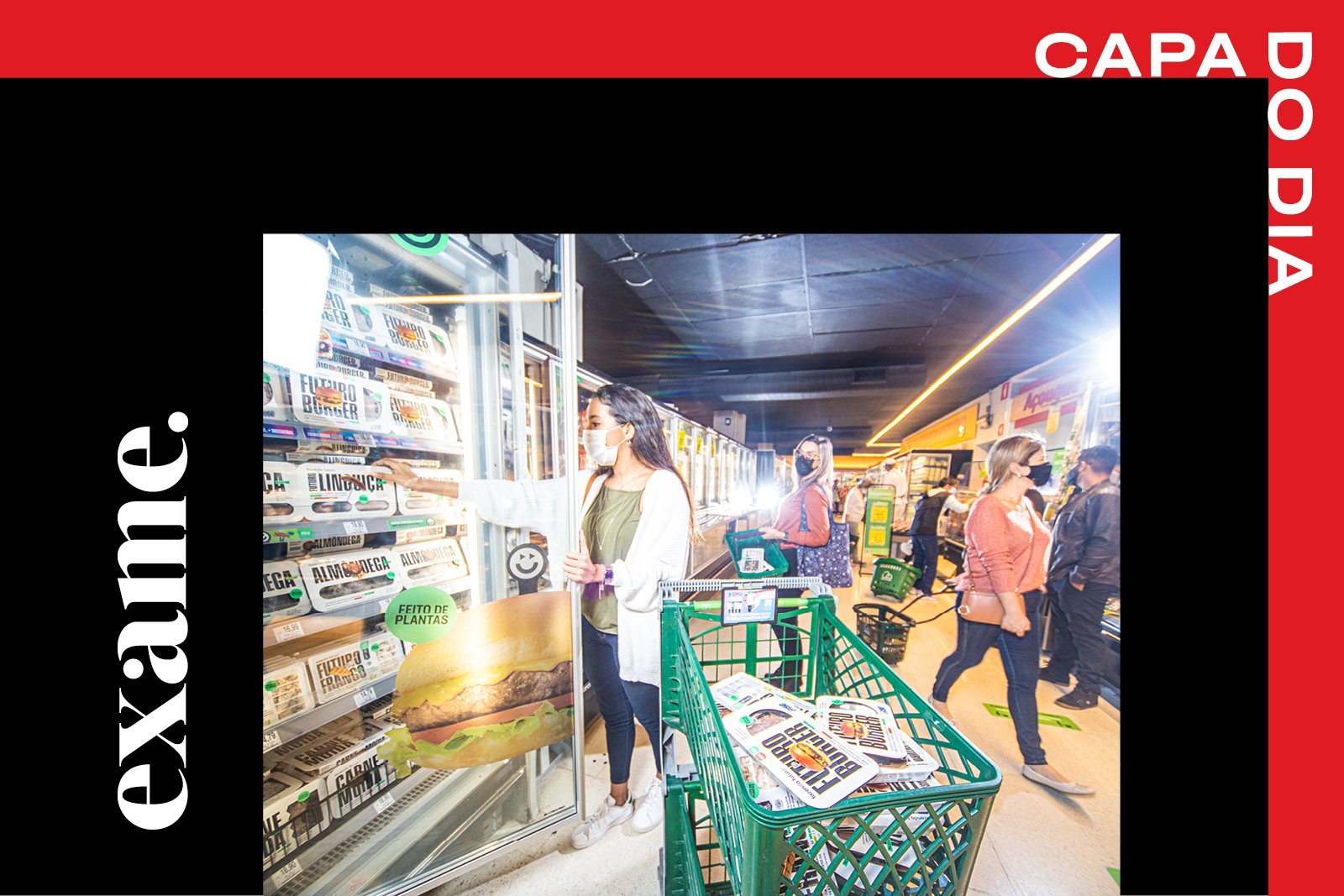 Nothing is so bad it can’t get worse. The popular saying was used by President Jair Bolsonaro last week when talking about dollar and gasoline prices. Because a large group of economists is already betting that what is bad could even get worse: Brazil is at risk of entering a scenario of stagflation, the perverse combination of stagnant economic growth, unemployment and high inflation.

How does the policy impact investments? Learn to invest in EXAME Academy

For now, it’s just a risk. The current scenario is bad, but it doesn’t come close to the 1970s, which had the last official crisis of stagflation globally — paving the way for the “lost decade” and hyperinflation in the 1980s in Brazil. But deteriorating expectations are a reality.

“The current signs are still of recovery, but only because the fall in 2020 was very big. All projections are already going down”, says economist André Biancarelli, director of the Unicamp Institute of Economics.

In addition to inflation around 10%, it is already projected that the Gross Domestic Product (GDP), after falling 0.1% in the second quarter, may be close to zero again in the third. For the year, the median of analysts in the Focus bulletin estimates GDP to rise at around 5%, after falling 4.1% in 2020. For 2022, the projection dropped to 2%, but a number of banks and analysis houses have already are betting on growth of less than 1%.

The term stagflation was coined in 1965, first cited by former British minister Iain Macleod of the Conservative Party. In a speech to Parliament, Mcleod debuted the word in English stagflation. “We now have the worst of both worlds: not just inflation on one side or stagnation on the other, but both together,” he said.

There, one of the first questions to a hitherto traditional position of economic theory was consolidated, namely that there would be no high inflation in a scenario of weak activity. If no one is buying so much for lack of income, how can prices be going up?

Even today, economics manuals still reinforce the existence of a call tradeoff, a choice, between employment and inflation: when unemployment is low, there can be an unwanted increase in inflation.

The problem, for Macleod’s UK or for Brazil in 2021, is that inflation started to appear even with economic activity not as heated as one would like.

In Brazil, with factors such as the water crisis and the high dollar, inflation officially returned to double digits and the country had the worst month of September since 1994, the year in which the Real Plan was launched. 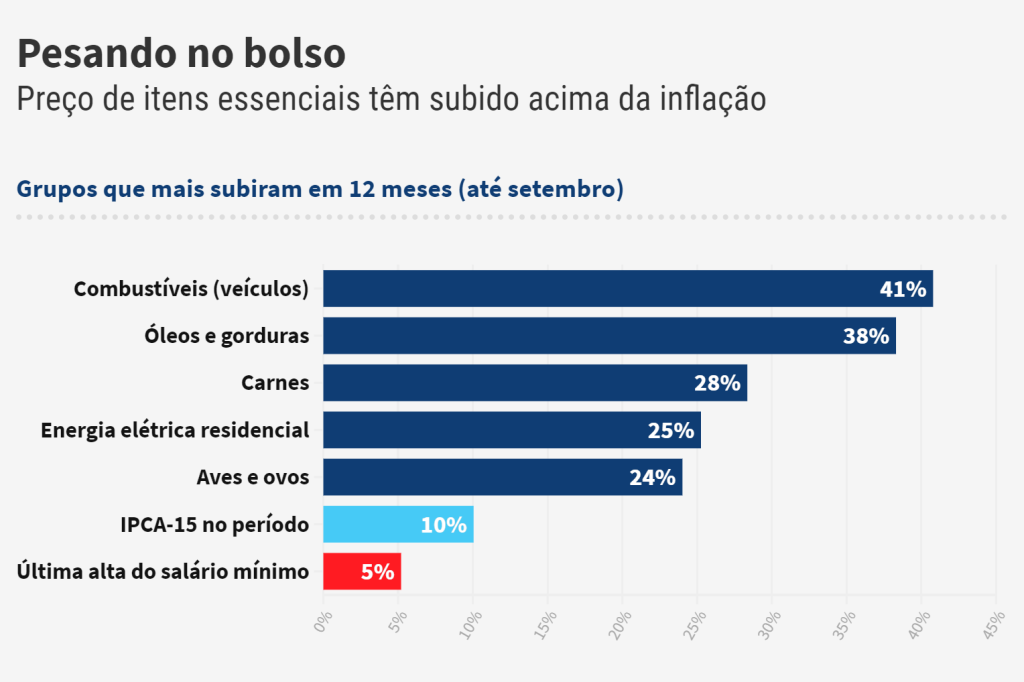 Groups with the highest increases until September in the IPCA-15, preview of the inflation measured by the IBGE

Groups with the highest increases until September in the IPCA-15, preview of the inflation measured by the IBGE (Arte/via Flourish/Prime Time Zone)

The expectation for 2022 is that inflation will fall again due to the combination of weak economic activity and high interest rates promoted by the Central Bank – with the Selic rate being able to close the year at more than 8%, after starting 2021 at 2.25% . But a nebulous scenario, and not an impossible one, would be growth close to zero next year and inflation not falling as fast as expected.

One challenge is the exchange rate, one of the main factors responsible for Brazilian inflation. The dollar is expected to stay above 5 reais (or more) in 2022, raising production costs in almost every sector and the price for the consumer.

The icing on the cake for a potential risk of stagflation is unemployment, which hit a record 15% during the pandemic. Although the rate has started to fall with some rebound in informal jobs and could be below 13% next year, there are no signs that it will go beyond that anytime soon.

The current crisis is different from 2015, when inflation also reached double digits, but with lower unemployment. In the following years, when unemployment rose and the economy slowed down, inflation also fell, following a more natural trajectory, unlike what happens now.

“Inflation is expected to cool down next year. But unemployment should not go out of double digits before 2023 or 2024”, says João Leal, from investment manager Rio Bravo. The economist does not believe, however, that Brazil and the world are already close to stagflation. “We are still in a scenario a little farther from the two terms that the word says.”

Brazil has particular characteristics and an inflation that often escapes traditional rules. But part of this debate is also taking place in the rest of the post-pandemic world. Amid the supply shock of covid-19 and government stimulus packages, stagflation has returned to the vocabulary of economists abroad.

Inflation in the US has surpassed 5% this year, instead of 2% before the pandemic. In Europe, prices are rising in sectors such as food and energy, while supply problems are wide open in the images of empty shelves that have become routine in the UK.

It is a different scenario from the Brazilian one because unemployment is relatively low in developed countries – although not yet at the level of “full employment” that countries like the US were experiencing in 2019.

The supply shock generated by covid-19, however, is also a classic in periods of stagflation. You semiconductors used in electronics, for example, are great villains of the time. First, there was a disruption in the supply chain with the pandemic. But even with supply rising again, prices did not fall.

“It is easier to say today that we have something structural happening that has increased the demand for these components. This creates an inflationary persistence in these items”, said in September the president of the Central Bank, Roberto Campos Neto, at an event of the BTG Paccutal bank ( of the group that controls the EXAM).

Thus, the risk is that inflation will last longer than initially expected. The scenario prompted former Morgan Stanley chief economist Stephen S. Roach to tell CNBC television this week that the world is “a supply failure away” from stagflation. Signals coming from China, responsible for a large part of the global supply chain, are also worrying.

Semiconductor factory in France: supply has not been able to keep up with demand, creating problems throughout the industrial chain, from computers to cars

In the 1970s, stagflation was mainly generated by the oil supply shock with the wars in the Middle East. Inflation in the US reached an unthinkable 20% at the time. Economists point out that the period of stagflation in major economies lasted a decade, from 1973 to 1982.

This time around, energy is again a problem around the world, with oil prices rising on the market and countries like China itself trying to reduce their dependence on coal. (In Brazil, there is also the aggravating factor of the water crisis that hinders the generation of hydroelectric plants, which account for two thirds of Brazilian electricity).

For now, the global economy is still expected to advance by nearly 6% in 2021, with reopenings and vaccinations. But there could be a reverse gear in this process, in this and the next few years.

“The term ‘stag’ is a serious possibility, although I’m less concerned with the inflation part,” says Barry Eichengreen, from the Department of Economics at the University of Berkeley in California.

“I continue to believe that central banks are prepared to respond sharply to persistent signs of inflation that are far above the target, raising rates and reducing spending.” He believes the main risk remains a new variant of the coronavirus.

Even if global stagflation does not prove to be true, for Brazil, more severe action by central banks abroad could reduce the prospects for the flow of dollars.

With inflation returning globally, the Fed, the US central bank, may raise interest rates (which are currently between zero and 0.25%) and tighten monetary policy starting next year. This expectation has also made the dollar continue to appreciate despite the broad US stimulus packages of more than 4.5 trillion dollars between the Donald Trump and Joe Biden governments.

The big question is how intensely this interest rate hike will occur. “Emerging market investors are prepared for a very gradual increase in central bank rates. If instead the Fed and others respond more aggressively, conditions in emerging markets could become more turbulent,” says Eichengreen.

A scenario of more energetic actions by the Fed against global inflation would find the Brazilian and other Latin American exchange rates already under severe pressure.

The brief cycle of commodities which Brazilian exporters benefited from during the pandemic was not enough to resolve the exchange rate issue, with the dollar remaining high despite the positive trade balance. 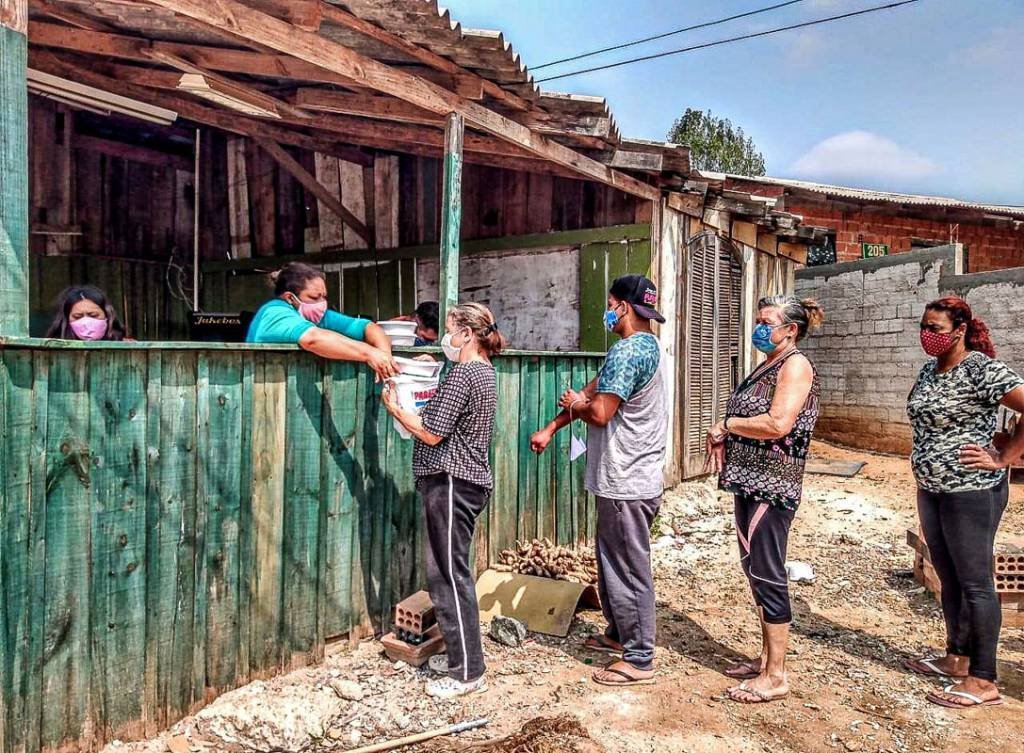 Donations: 19 million Brazilians are hungry, according to the Brazilian Research Network on Food and Nutritional Sovereignty and Security (Penssan)

Donations: 19 million Brazilians are hungry, according to the Brazilian Network for Research on Food and Nutritional Sovereignty and Security (Penssan) (Ednubia Ghis/Public Photos)

As a bonus, without measures such as price-regulating stocks, the export of commodities it reduced the supply of food internally and directly impacted consumer prices. Food has risen by around 10% in 12 months in the IPCA, and the basic food basket for a family in São Paulo is already tied with the minimum wage. All in all, Brazil must have returned to the United Nations Hunger Map.

In addition to the disruption in domestic food supply, the recent rise in energy and fuel prices will cause production costs to remain high in all sectors, in a far from virtuous cycle.

Biancarelli, from Unicamp, stresses that countries like Argentina, which have debt with the International Monetary Fund (IMF) in dollars and inflation of 40%, are in a worse situation than Brazil, which no longer owes the IMF and has reserves international. This advance, in his view, makes it impossible to compare today’s situation with previous crises.

“But the high dollar shows how foreign demand will rarely pull an economy like Brazil’s and solve the exchange rate on its own. In some circumstances it can help, but for the level of activity and employment, it is not enough”, he says.

In practice, Brazil entered the pandemic much worse than part of the world, picking up the pieces of the 2015 crisis. The dollar, which was below 4 reais in 2018, is not expected to return to these levels. The predicted political risk for 2022 with the elections makes the scenario even more volatile.

“There is, in fact, this kind of pause in all discussions until the elections”, says Leal, from Rio Bravo. “I don’t see room for the exchange rate to cool down before that. And then, it will depend on the signals of whoever is elected.”

In addition to all the problems, post-pandemic Brazil will still have to deal with its own challenges, such as the reconstruction of the internal market, high levels of poverty and backward infrastructure. In a report on the Brazilian economy last year, the IMF also warned that a challenge for the country is that some of the jobs that have gone will not return due to the accelerated digitization of the pandemic.

“Brazil has this additional difficulty of being without a sustained growth cycle for a long time,” says Biancarelli.

“The external scenario is a risk, it could be a sign that the post-covid recovery may be much more bumpy for countries below the equator. But beyond that, there are many other layers of difficulty for Brazil to grow.”

In crisis for almost a decade, Brazil needs to find its course for the post-pandemic. But the bad news is that this shouldn’t be discussed until October 2022.

Interest, Dollar, Inflation, BC, Selic. Understand all the terms of the economy and how they affect your pocket. Sign the EXAM