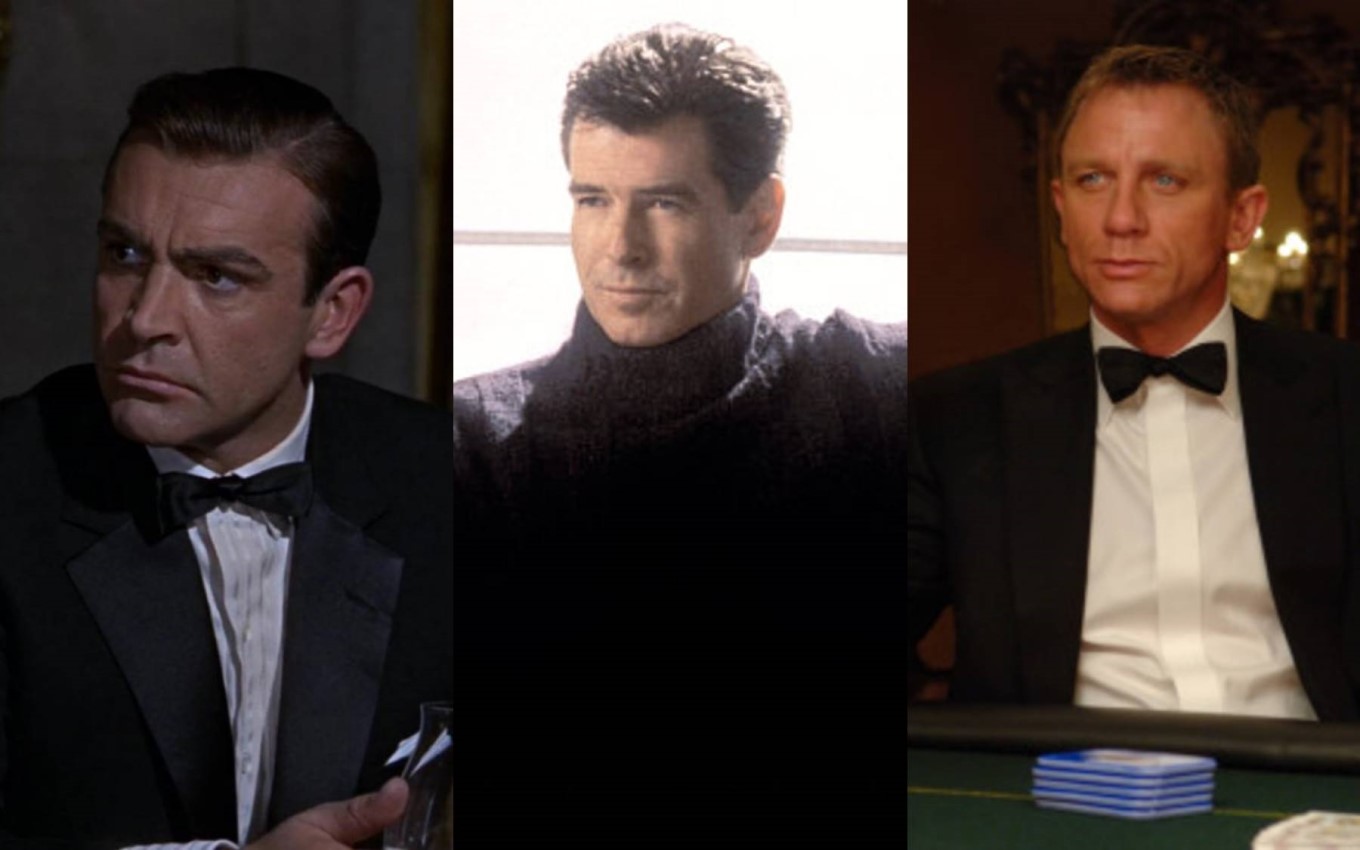 The most famous spy in the world finally returned to theaters last Thursday (30). After being postponed five times, the new 007 film ends the cycle of Daniel Craig as James Bond. To remember the actor’s passage in the franchise and also get into the mood of 007 – No Time to Die, the public can watch all productions on Telecine streaming.

In 49 years, the James Bond franchise has produced 25 films with six different protagonists. Sean Connery (1930-2020) was the first to play the iconic spy. Roger Moore (1927-2017) is the record holder for productions, having lived as a spy on seven occasions.

Exclusive to Telecine, all 007 films will remain in the streaming catalog until December 31, 2021. TV news presents the complete list of productions about James Bond.

Check out the list below, with trailers, synopses and release dates:

Film’s most famous spy, James Bond (Connery) investigates the disappearance of a British agent. During his investigation, he discovers the hideout of Dr. No, played by Joseph Wiseman (1918-2009). This crazy genius intends to divert the course of American rockets.

In the plot, Bond is tasked with helping a beautiful Soviet agent. While helping the woman to flee her country, the protagonist tries to retrieve a code reader from the Russian embassy. But he is surprised, as he did not expect this to be a trap by the Specter organization.

Agent 007 must once again save the world. In this film, the spy must spy on the millionaire Goldfinger, played by Gert Fröbe (1913-1988). The villain has a grandiose plan: to steal the US gold reserves held in Fort Knox.

The city of Miami is under threat. The Specter organization hid bombs and, in order not to blow up the place, demands a payment of US$ 100 million (approximately R$ 540 million, at the current price). The spy, then, must find the stolen weapons and prevent the deaths of millions of innocents.

During a mission in space, an American ship mysteriously disappears. Americans are suspicious of the Soviets and are already thinking of retaliation. Bond starts to investigate the case, but in the midst of his investigation, the Europeans also lose a spaceship. The agent needs to solve the case quickly to avoid World War III.

Impressed by 007 (George Lazenby), a head of a powerful criminal organization offers the spy insider information. Bond discovers the location of his worst enemy, Ernst Blofeld, played by Telly Savalas (1922-1994). The villain plans to destroy humanity with a virus, and the only one capable of saving the world is the iconic British agent.

In Connery’s latest Bond film, the agent must investigate an alleged worldwide diamond smuggling network. For this, the protagonist travels to the United States, where the millionaire owner of a casino is the main suspect in the case.

After three British agents are murdered while investigating drug smuggling, Bond (Moore) joins the case. When he arrives in New York to do his investigation, he is attacked by the henchman of a Harlem crime boss. He soon discovers a plot to put $2 billion ($10.8 billion) of heroin on the US market.

In the plot, a gold bullet arrives at the headquarters of MI6, the British intelligence agency, with “007” engraved on it. That means Bond will be the next target for a professional assassin. But the spy discovers the villain’s true plan: the kidnapping of a scientist who invented the solution to the planet’s energy crisis.

An international crisis begins when a submarine with 16 nuclear missiles simply disappears. Charged with investigating the case, Bond must quickly retrieve the warheads. For this, he has the help of a Soviet agent (Barbara Bach).

In the plot, a plane carrying a space rocket has an accident. However, when MI6 goes to examine the case, it finds no trace of the ship. Therefore, 007 is on a mission to find out what happened. The protagonist begins with a visit to the millionaire who built the aircraft. But the eccentric man has strange ideas about what the fate of the human race should be.

While trying to discover his true allies, the spy is tasked with investigating yet another disappearance. After a patrol ship mysteriously sinks, an important British agent disappears. Bond needs to find a valuable secret weapon before the Russian enemies. For this, he counts on the help of the beautiful Melina Havelock (Carole Bouquet).

When trying to solve who murdered agent 009 (Andy Bradford), Bond decides to follow a lead. He believes a stolen Kremlin gem could be the key to solving the mystery, as the dead spy was found with a fake Fabergé.

Tycoon Max Zorin (Christopher Walken) wants to control the computer market. He decides to devise a crazy plan, in which thousands of innocent people will die, to get even richer. After returning from his trip to the Soviet Union with a computer chip, Bond decides to investigate the villain’s industries.

In the plot, Bond (Timothy Dalton) helps a European general escape. But he is quickly recaptured, which makes the MI6 a big joke. The most famous spy in cinema, then, must take the case. He discovers a big plot linked to Brad Whitaker (Joe Don Baker), a big gun dealer.

An important drug dealer manages to escape from prison and seeks revenge against the authorities. In the middle of an agent’s honeymoon, the criminal kills the Narcotics Combat Agency member’s wife and leads the man to torture. James Bond discovers what happened and decides to seek retaliation, but MI6 refuses their best spy’s request. He then decides to ignore his superiors and kill those responsible for his friend’s murder.

With the end of the Cold War (1947-1991), the way to achieve power involves dangerous schemes that aim only at profit. In this context, Bond (Pierce Brosnan) tries to find Goldeneye, a secret weapon capable of destroying anything that has an electronic circuit. To prevent a worldwide catastrophe, he must team up with Natalya (Izabella Scorupco), a computer programmer.

After discovering Elliot Carver’s (Jonathan Pryce) plan, 007 must prevent a political and international incident that could lead to World War III. During the mission, the protagonist re-encounters Paris (Teri Hatcher), in addition to meeting Wai-Lin (Michelle Yeoh), a Chinese agent disguised as a journalist.

In the plot, Bond is responsible for the safety of Elektra King (Sophie Marceau). Heir to an immense fortune, she plans to build a 1,300-kilometer pipeline. But this catches the eye of Renard (Robert Carlyle), an international terrorist. Seeking revenge, the criminal is ready to finish off the famous British spy.

In Brosnan’s latest film as 007, the secret agent has a difficult task. He needs to thwart the plans of Gustav Graves (Toby Stephens) and his faithful right-hand man, Zao (Rick Yune). The duo is developing a high-tech weapon that could put the world back at war.

In Craig’s debut as the world’s most famous spy, the MI6 agent begins to investigate Le Chiffre (Mads Mikkelsen), a banker for terrorist organizations around the world. To dismantle the criminal’s plans, Bond enters a poker game with millionaires. Sent by M (Judi Dench), Vesper Lynd (Eva Green) accompanies the protagonist on this mission.

To continue the investigation of what happened in the previous film, Bond and M conduct the interrogation of Mr. White (Jesper Christensen). In an attempt to understand what is really going on, the agent travels to Haiti. There, he discovers the plans of criminal Dominic Greene (Mathieu Amalric). The antagonist wants to remove the current Bolivian government from power.

Declared dead by MI6, Bond watches on television the terrorist attack suffered by the British agency. Willing to defend his country once more, the agent returns to the English capital and introduces himself to M. They find out who was responsible for the attack. Unfortunately for the pair, this person is very familiar with how the authorities work.

In the plot, Bond is temporarily suspended after performing a mission without the consent of his boss M (Ralph Fiennes). While being monitored by MI6 at all times, the spy enlists the help of his colleagues to continue his personal investigation into the mysterious organization called Spectre.