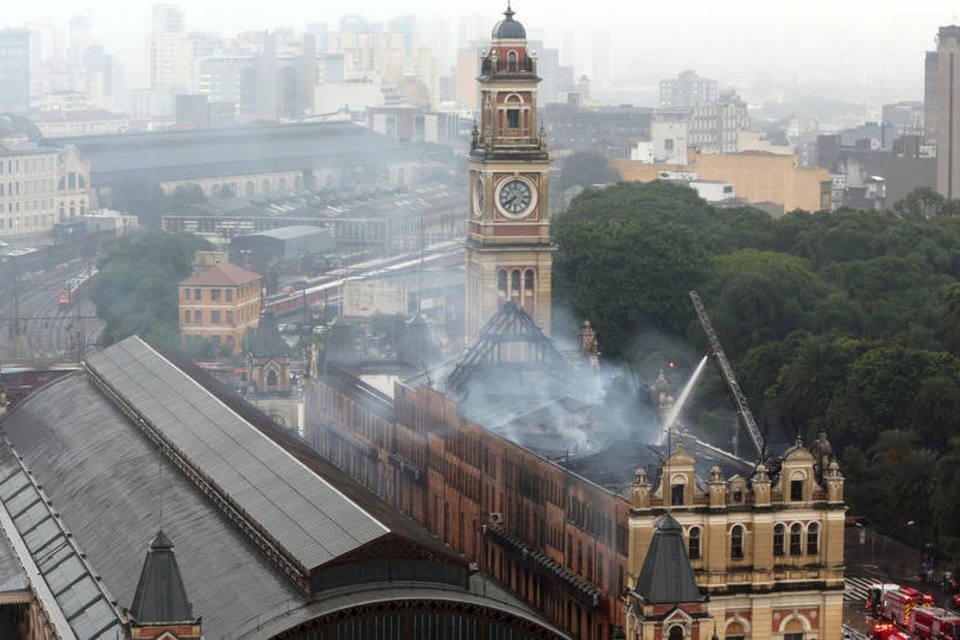 “I need these words written.” Likewise, with “writing” in the singular, was how the artist from Sergipe Arthur Bispo do Rosário immortalized the phrase in one of his most famous embroideries. Like so many artists, Bispo used the word as the raw material for his works in robes that made him one of the main names in Brazilian art, despite having lived half a century in a psychiatric institution.

Perhaps Bispo’s relationship with words, of need and enchantment, is the best synthesis for the Lingua Solta exhibition, curated by Fabiana Moraes and Moacir dos Anjos, which reopens the Portuguese Language Museum on July 31, almost six years after the fire that destroyed part of the Estação da Luz building.

The exhibition shows the influence of language on the visual arts, featuring works by various artists who use letters, phrases and words. “We had the challenge of adapting the museum, which had no technical reserve, to an exhibition with many objects, but also the joy of making this conversation between what we understand as contemporary art and popular art”, says curator Fabiana Moraes to State. “I had a desire to show folk art as not being a docile art.” It is this intention that made her bring together names like Mira Schendel, Leonilson and Anna Bella Geiger and popular, anonymous artists and even meme producers like the @saquinhodelixo collective.

For Moacir dos Anjos, the way the exhibition was mounted, in a non-hierarchical manner, is also an engaged aspect of the show. “Without undermining the quality of established artists, this separation between erudite and popular, which is always part of the erudite field, is very arbitrary”, he believes. “Language is one of the main ways of expressing wishes, enunciating damages or injustices and also claiming for rights, claiming reparations.”

In the hiatus in which the museum was inactive, the world changed in several ways that made the institution adapt and rethink its role. “The Museum of the Portuguese Language is not the museum of mesoclisis” says technical director Marília Bonas to Estadão. She says that the museum began to pay attention to “the languages ​​of immigrants, the languages ​​of resistance, which only continue to exist because they resisted, Portuguese as this space of dispute, often of violent imposition”.

In this reality, the incorporation of the debate on non-binary language, which only in its infancy when there was a fire in the museum at the end of 2015, and issues such as linguistic prejudice and xenophobia are part of the institution’s agenda, which seeks to celebrate diversity of the language. This can be seen in exhibition spaces such as Falares, on the 3rd floor, where the most different accents of Portuguese are honored without appealing to exoticism.

The museum’s long-term exhibition, curated by Isa Grinspum Ferraz and Hugo Barreto, has also been enhanced. “The language has changed, society has changed since we started designing the museum, in 2003,” says Isa. “We had to rethink what to keep, what to update and what to bring again, but we tried to keep the museum’s spirit, which is to deal with language with a social, anthropological vision, and not as a grammar, but as what makes us Brazilian .”

For Letícia Santiago, coordinator of Museums at the State Secretariat for Culture and Creative Economy, the Museum of the Portuguese Language also plays an important role in the location where it is located, close to the region that became known as Cracolândia. “We hope that the museum will bring new life to this area”, she says, and recalls that, with the reopening, the Luz region gains another node in a wide cultural network, which includes Pinacoteca, Sala São Paulo, Estação Pinacoteca , Museum of Sacred Art, Casa Mário de Andrade and Museum of Energy. In addition, she recalls that the museum now has fire prevention equipment that is even beyond the building’s legal requirements, such as sprinklers.

Larissa Graça, manager of Heritage and Culture at the Roberto Marinho Foundation, who accompanied the entire reconstruction of the museum, also highlights the attention to sustainability and accessibility in the new museum: “Ten years ago, we understood accessibility as access to physical space, but today we think in the experience you have after entering that space”.

The state secretary of Culture and Creative Economy, Sérgio Sá Leitão, assured the Estadão that the reopening of the Portuguese Language Museum is being done in a safe manner. “We are in permanent contact with the Covid-19 Contingency Center.” The estimate of the state government, according to him, “is that we are in a period of sustainable decline in pandemic indicators, largely due to vaccination”.

The exhibitions, both long-term and the temporary Lingua Solta, have a very evident combative character. For Sá Leitão, “the simple act of investing in a museum and carrying out the restoration of a historic building is a political act” and “one of the functions of a museum like this is to question the views and previous expectations of the public”.

The presidents of Portugal, Cape Verde and Mozambique confirmed their presence at the event of the reopening of the Museum of the Portuguese Language, on 31 July.