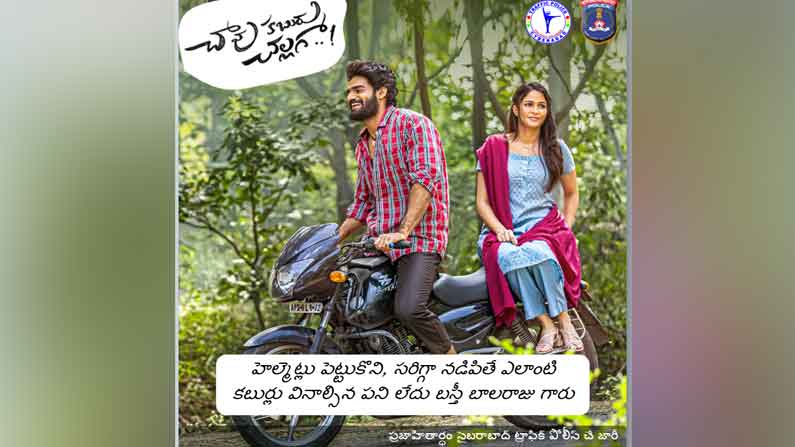 Chavu Kaburu Challaga movie starring young hero Karthikeya has come to the forefront of the audience recently. The film manages to entertain as well as inform. Karthikeyan as Basti Balaraju in this movie,

Cyberabad Traffic Police: Young hero Karthikeya starrer Chavu Kaburu Challaga has just hit the screens. The film manages to entertain as well as inform. The film stars Karthikeyan as Basti Balaraju and Andala Bhama Lavanya Tripathi as Mallika. Senior heroine Aami will not be seen in a pivotal role in the film. Meanwhile, the posters released before the release of the film are making a lot of noise. However, the Cyberabad police tried to raise awareness through these posters. No matter how much the police insist on wearing a helmet while driving, some are acting at their own discretion without complying with it. With that, the Cyberabad police took a poster from the movie Chavu Kaburu Challaga and trolled it in their own style.

In this movie poster, the hero Karthikeya is seen riding the heroine on a bike. However the hero in this poster is not wearing a helmet on his head. Over sitting on the bike tank does not appear to be recklessly riding the bike. Basti Balarajugaru shared this poster on social media and said that there is no need to listen to any gossip if you wear a helmet and walk properly. Now this post has gone viral on social media. Netizens have been making various comments on this post. While some are supporting the police .. and some are commenting in support of their favorite hero. “Sir, how many challans are you putting on that vehicle .. no helmet .. not sitting properly .. no side mirror .. she has no helmet in the back seat”. One commented that another was posting photos of police not following the rules. Overall, netizens say that the Cyberabad police are making good use of the movies.

Anasuya Bharadwaj: Anasuya is a beauty who has lost her temper .. Video on social media .. Netizens who are getting fed up