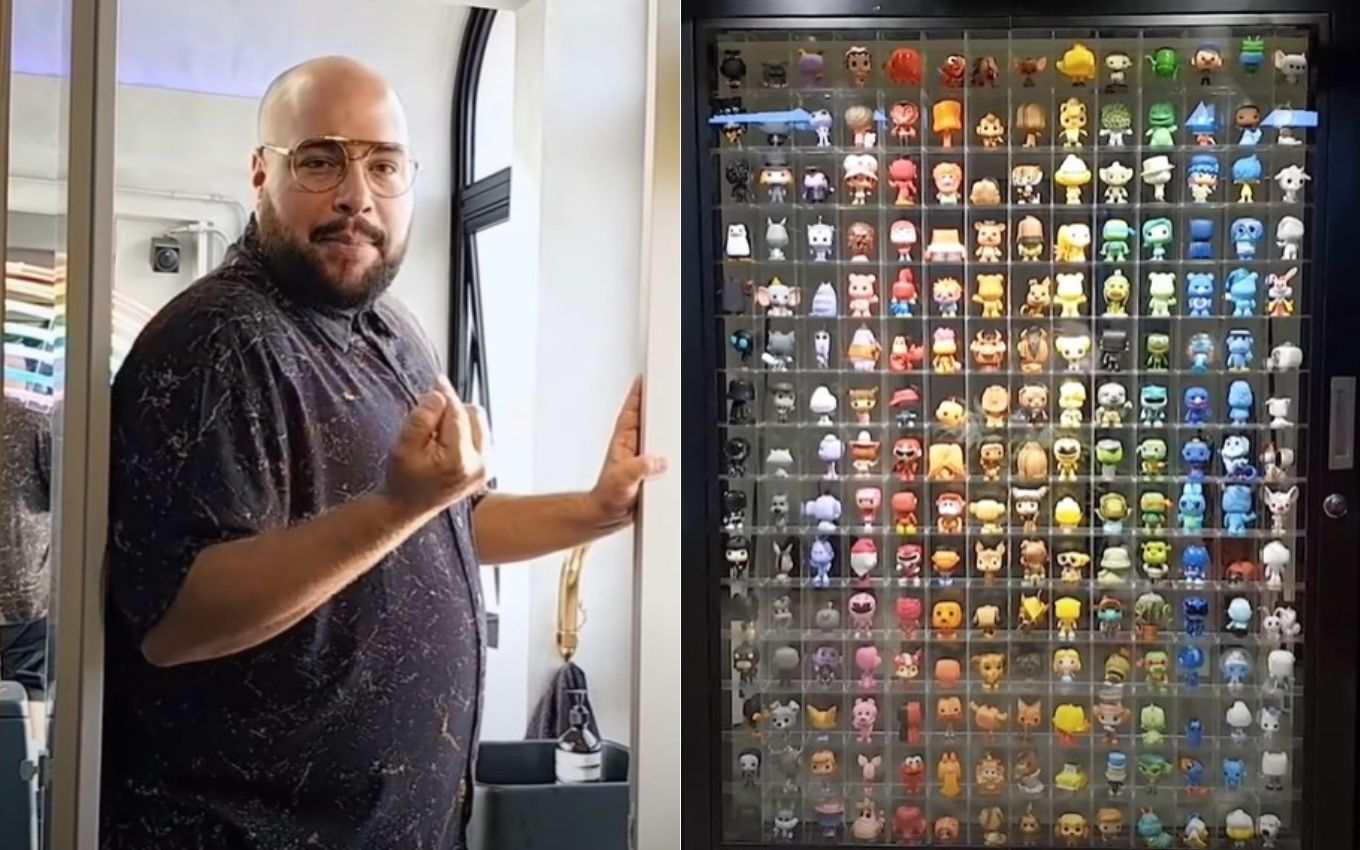 Tiago Abravanel opened the doors of the luxurious duplex penthouse where he lives with her husband, audiovisual producer Fernando Poli, in São Paulo. The actor said that he has been living in the 500 square meter property since 2019; the space has an open-air cinema, swimming pool, “lavabo experience” with panoramic views and a collection of 800 dolls spread throughout the rooms.

The 33-year-old artist exhibited the apartment in the first episode of the program Pode Enter, which became available on the YouTube channel Casa GNT on Thursday night (17). Silvio Santos’ grandson said that he dreams of having a amusement park, named Abravolândia, and that the residency is the beginning of that desire he hopes to fulfill.

The exit from the elevator is to a hall made in a container with chandeliers. The entrance has a statue of Saint George carved in wood, a gift from the presenter Eliana. The entrance door already shows the great passion of the actor and singer and is all decorated with funko dolls. Items like this cost an average of R$180 each.

“As Fernando and I are a proudly homosexual couple, LGBTQIA+, a flag that we carry, we decided to place the dolls in a chromatic way, like a rainbow. Here at the door there are only about 200 and something, so there are much more spread around the house,” he explained.

On the first floor of the residence, there is a bar integrated with the kitchen, a dining room with a personalized Mickey doll. The table is marble, with purple swivel chairs. Tiago Abravanel joked about an agreement he has with her husband:

One of Tiago Abravanel’s favorites is an armchair in the living room, which had to reach the apartment by the external area, as it did not go through the door. Watch the video where it shows all the duplex coverage:

The space also has a machine to catch animals, like those found in amusement parks, a gift from her husband to Silvio Santos’ grandson. “I’m sure if there was a live-action version of Toy Story it would be right here at home,” he joked as he shot the video.

Another treat he received from Fernando Poli and a friend was a panel with eight dolls of the personalities he honored at the Domingão do Faustão Show of the Famous, in 2018: Gloria Gaynor, Sidney Magal, Elton John, Rosana, Tim Maia (1942 -1998), Gaby Amarantos, Nelson Ned (1947-2014) and Milton Nascimento. “It was so wonderful when I got this gift that I almost died,” he said.

Tiago Abravanel also showed a room that he dubbed the “lavabo experience”, in which guests can use the toilet while enjoying a panoramic view of São Paulo through a window. The space also has a neon rainbow, which symbolizes representation, and a speaker for listening to music.

On the second floor, the artist boasts an outdoor area decorated with sofas and whose main attraction is an open-air cinema. The television is protected with a garage door. In this same environment, the couple and guests also have a swimming pool available. According to Abravanel, the work on the apartment took two and a half years.