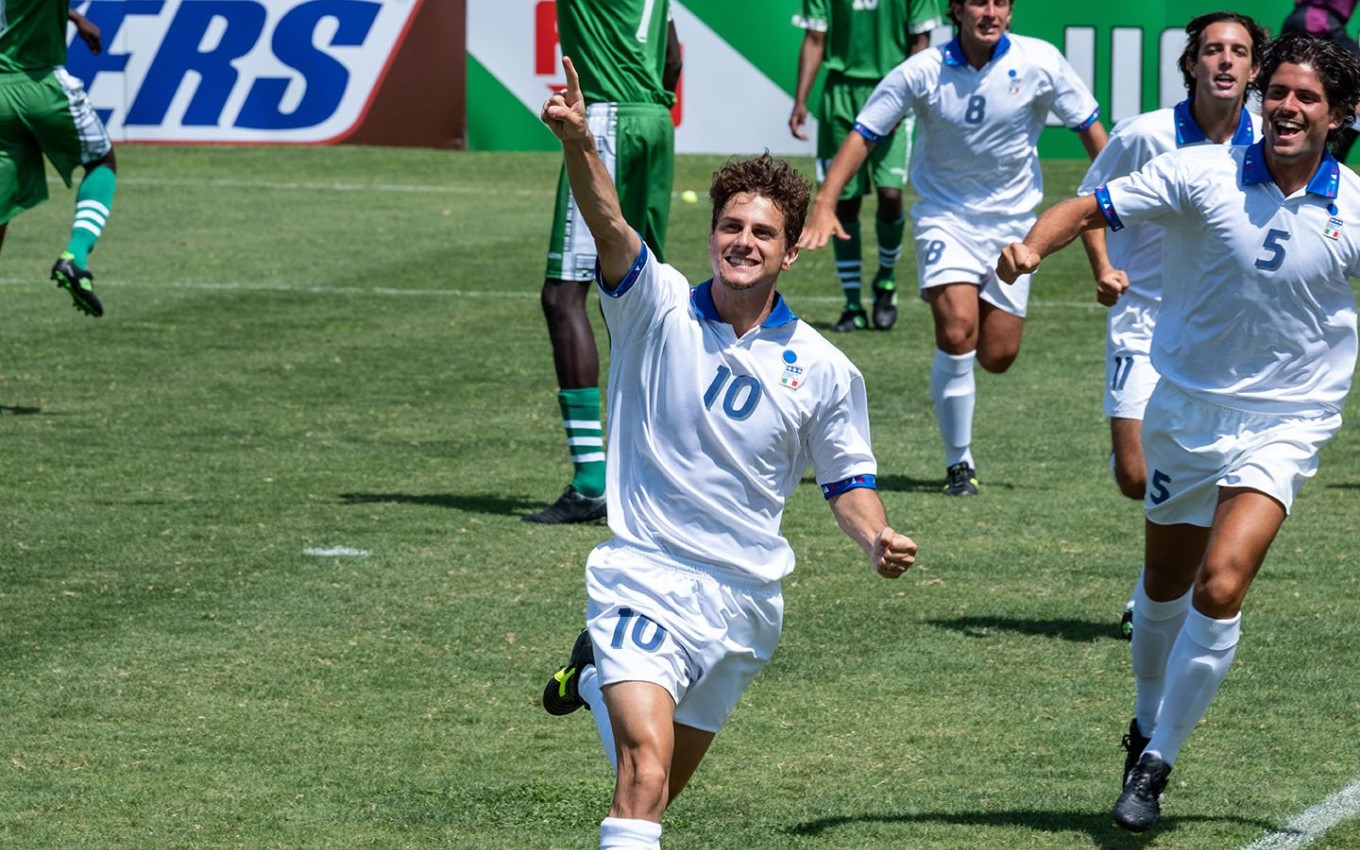 Netflix’s new film, The Divino Baggio tells the story of one of the greatest Italian players of all time, but who was marked by missing a penalty in the 1994 World Cup final between Brazil and Italy. From injuries to Buddhism, from the best in the world to the one responsible for the fourth Brazilian championship, Roberto Baggio (Andrea Arcangeli) is proof that heroes also fail, as they are human.

The feature begins with the striker, aged 18, already sold to Fiorentina, an elite Italian club. However, in one of his last games for the club where he played in the third division, Baggio is injured, and the prognosis is not good.

Bruised and alone in a new city, the young man goes into depression. He begins to question his football career, even though it is pointed out as one of the greatest promises of Italian sport. About to be switched to a lower club, Baggio finds strength in religion, more specifically in Buddhism.

Although skeptical at first, the attacker manages to see his purpose through religion and outlines his goal: to be drafted for the Italian team. Roby, as Baggio was called by his acquaintances, had an even bolder goal: he wanted to be a world champion over Brazil.

His father, Vittorio Petrone (Thomas Trabacchi), always strict with his eight children, told the striker that he had promised, at the age of three, that he would be the World Cup champion over Brazil to avenge his defeat in the 1970 final. The big dream is remembered throughout the entire Netflix movie.

After his good performances, Baggio is called up for the selection. The plot advances six years, to 1994, when Italy will play the World Cup in the United States, led by the number ten and best in the world.

The strong personality of the attacker starts to show during the competition. Behind the scenes, he clashes with the coach of the national team, Sacchi (Antonio Zavatteri), when questioning the coach’s tactics and behavior. Italy suffers in the group stage.

But it is in the tie that Baggio and Italy start to play well. One of the main reasons is the arrival of his family in the United States to support the attacker, something he has always sought throughout his career.

With goals and good performances, Baggio manages to take Italy to the final. And against Brazil. The attacker’s dream can finally be achieved, but he almost misses out due to an injury in the semifinal of the competition.

In preparation for the final between Brazil and Italy, the coach makes the player kick balls with as much force as he can inside a closed room. Baggio, a little paranoid, thinks the coach wants to get him out of the decision, but Sacchi claims he simply wants to see his athlete’s condition.

After the tension, Baggio is cast among the titleholders for the decision. In the eyes of the character experienced by Andrea Arcangel, time flies by. Until the moment when the penalty kicks, everything freezes and every second is an eternity. The rest is history: he fails to honor his father’s promise and kicks it out. Brazil is four times world champion.

Another six years pass. Roby still remembers the missed penalty and seems to have no more market in Italy. Until little Brescia makes him a proposal, in which he finally gets the support of his coach and the vote of confidence of the whole team.

Once again, he sets out the goal of participating in a World Cup. In a meeting with the new coach of the national team, he is promised that, if he is in shape, he will be taken to the competition.

Baggio then suffers another injury. Now older, the striker appears to have reached the end of his career. But he has a goal and will not stop. With the help of his family, Roby has a quick recovery. And, on his return to the lawns, he gets great performances.

To everyone’s surprise, the new coach does not live up to his promise and does not take the striker, even in form, to the World Cup. The end seems to be bitter for a player who has gone through so many difficulties in his career, but the production finds a new end.

Baggio is finally able to talk to his father about the rigid relationship between the two. The public discovers that, even without appearing, Vittorio has always supported his son. He admits to having invented the story about the promise of winning Brazil in the World Cup final, just to give his son a goal, because he knew of Roby’s ability.

Although O Divino Baggio tells the story about a football player, sport is not the main theme of the production. Baggio’s real-life moves are only shown during the final credits, and the most important lesson is that everyone makes mistakes, even the stars and heroes – even the best in the world.