The long-awaited reunion of the cast of Friends (1994-2004) debuted this Thursday (27) in the United States. The nearly two-hour program is filled with moments made for fans, with behind-the-scenes revelations – such as the fact that David Schwimmer (Ross) hated the monkey who played Marcel – to appearances by famous comedy fans. Lady Gaga, for example, sings Smelly Cat with Lisa Kudrow and is singled out as the new generation Phoebe.

Friends: The Reunion will only debut in Brazil on June 29, with the launch of the HBO Max platform here. To satisfy the fans’ will and curiosity, the TV News advances five unmissable moments of the program:

From the beginning, the couple 20 of Friends should have been formed by Ross and Rachel (Jennifer Aniston). But another pair stole the show and became just as important. The curious thing is that the romance between Chandler (Matthew Perry) and Monica (Courteney Cox) should be something temporary, just for one episode.

Marta Kauffman and David Crane, creators of the series, reveal in the special that the initial idea was that the two characters would have sex in London, where they were for Ross’ wedding at the end of the fourth season, and then they would have some embarrassing moments, but nothing more than that it.

However, the reaction of the audience present to the recording of the episode to the moment Monica appears in bed with Chandler made the producers rethink their plan. “Because of the way the audience reacted, we had to listen. ‘We have to pay attention to that’,” recalled Marta.

As it was the end of the season, producers had all the time in the hiatus until next year to define a new strategy. “We went from something that should be overnight just to something real,” said Crane. “And yet we didn’t know how long it could last, so we had a lot of fun with them hiding the relationship,” added the creator. 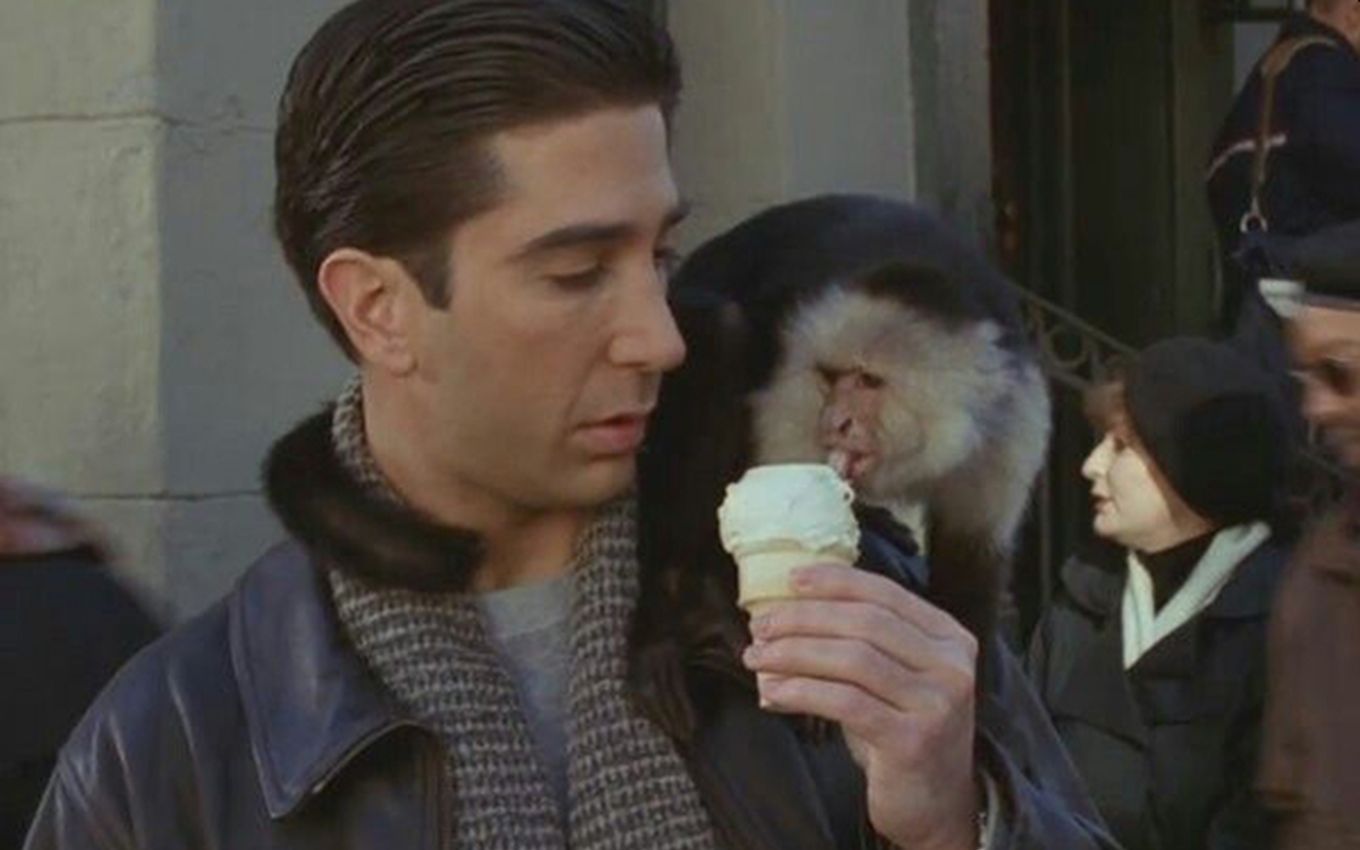 Friendship only in front of the cameras

Ross’s pet, the monkey Marcel appeared only during the first season of Friends. The reason? David Schwimmer hated the animal – which was actually played by a female named Katie. In the special, the actor reveals the reasons why he did not get along with the animal.

“I love animals, I love primates. I want to make it clear that I have nothing against animals. But here’s my problem: the monkey was trained, but it had to reach its mark at the right time. And our markings were always screwed because the monkey didn’t This happened several times, we were going to do something funny and we had to start again because the monkey was wrong “, he starts.

“Besides, he was always sitting on my shoulder, and between the scenes his trainer would come and give live larvae for him to eat. While he was on my shoulder! Then he would break the larvae with his hands and eat them, and then he would take them on my face. And I was covered in larva goo. There came a time when it was time for the monkey to go away! “, he said.

Jennifer Aniston, then, regrets the early departure. “I liked the monkey!”, He praises. “Because you didn’t have to touch it!” Says Schwimmer. 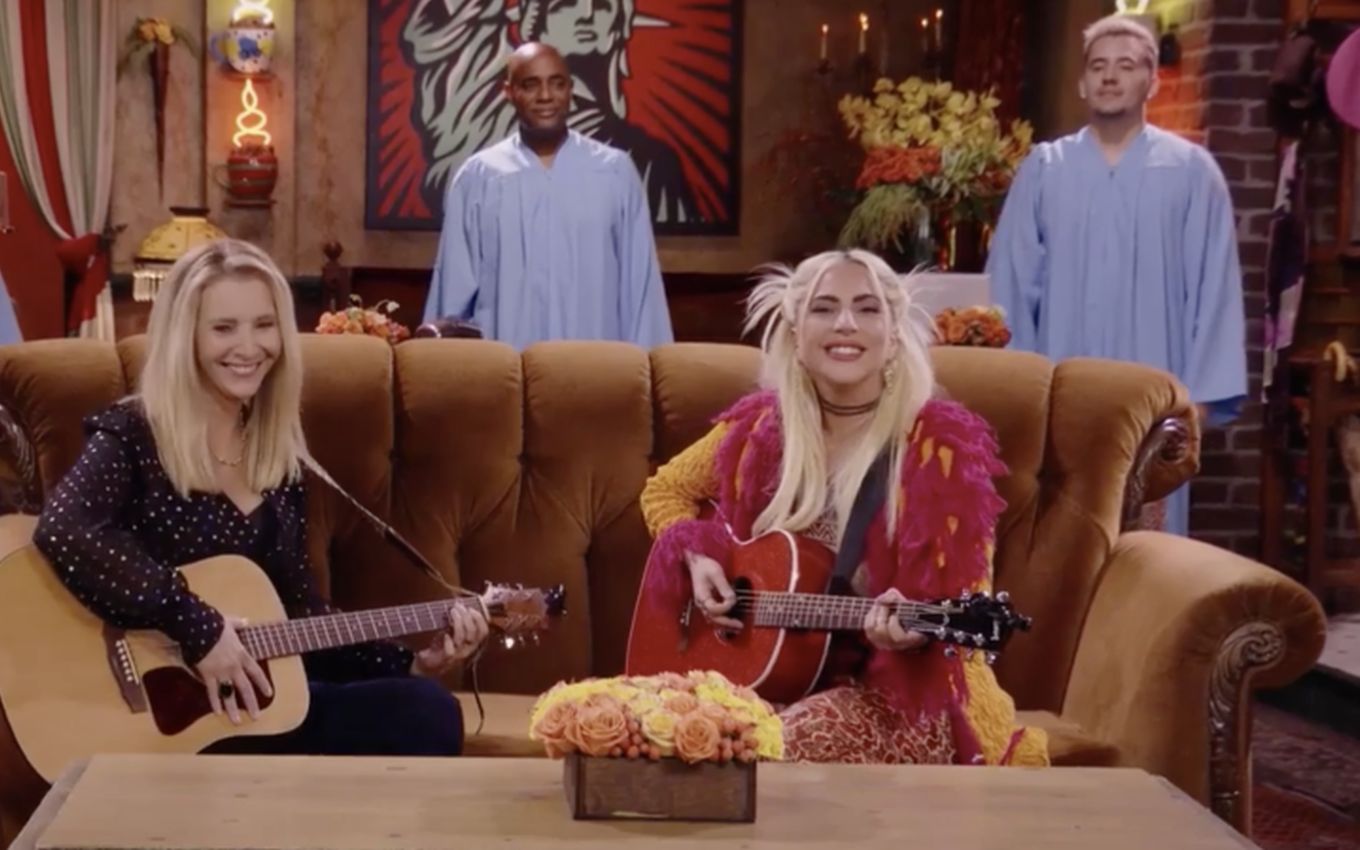 Even gospel choir gets together at the time of singing

Lady Gaga, a declared fan of the series, makes a special appearance at the meeting. Lisa Kudrow is sitting on the Central Perk sofa, guitar in hand, and starts playing Smelly Cat for the audience when the singer appears in the cafeteria. “I love Smelly Cat, it’s one of my favorite songs”, releases the owner of the hit Poker Face, who asks to play with Lisa.

The version with Gaga refers to the episode The One Where Eddie Moves In, of the second season, with the right to a gospel choir. At the end of the song, Lisa jokes: “I still think it’s better when I sing alone”. “I think so too”, praises the professional singer.

Then, the Oscar winner thanks Phoebe’s interpreter for giving a voice and space on TV to people who feel different from normal. “And thanks to you for doing that now,” says Lisa. 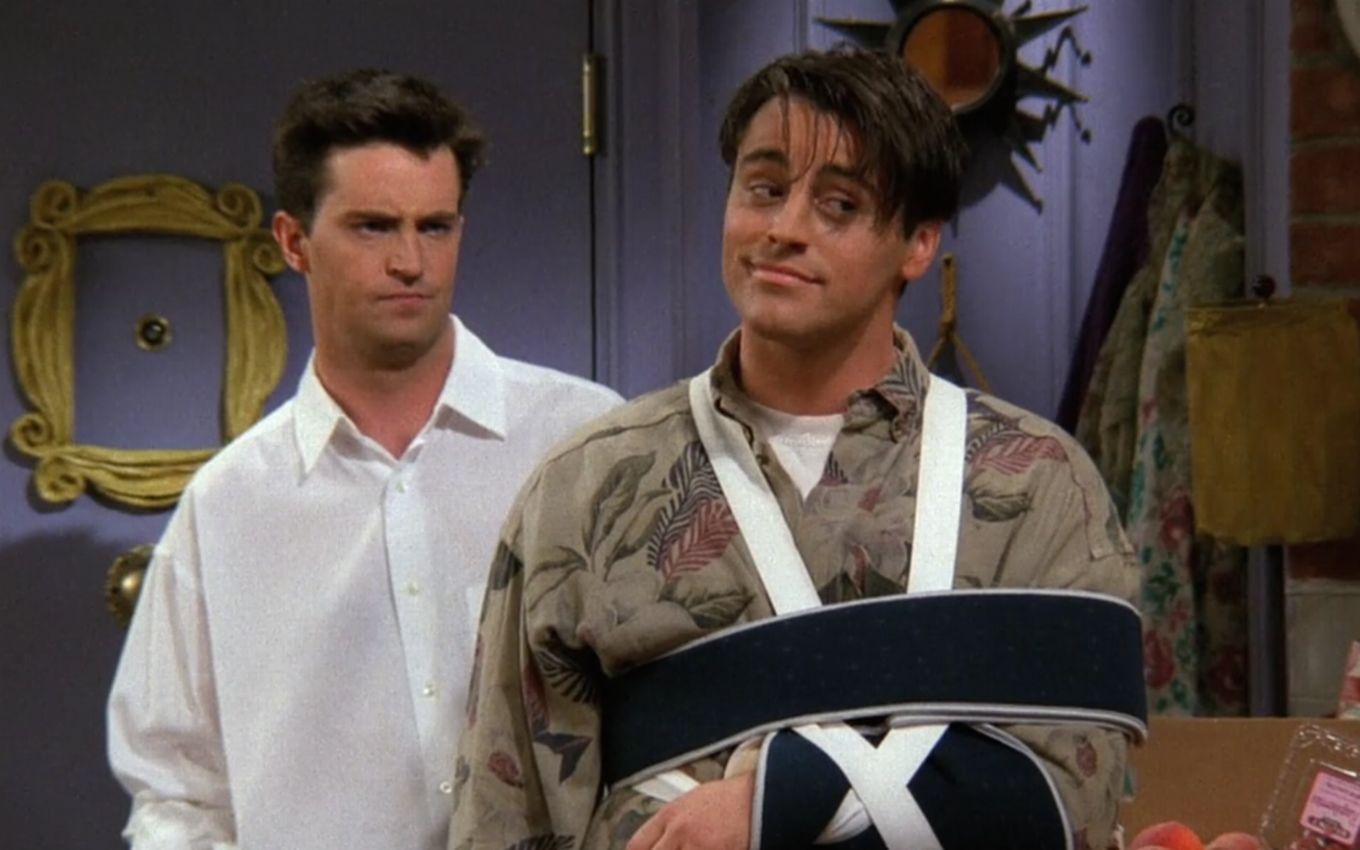 One of the simplest episodes in the entire series ended up being the one that took the longest to get done because Matt LeBlanc (Joey) dislocated his shoulder during the recording. This is The One Where No One’s Ready, of the third season, a chapter that takes place in real time.

In that plot, Ross and Chandler dispute who is going to sit in an armchair in Monica’s apartment and, at a certain moment, both run across the stage to try to occupy the seat first. “We had already done the scene three times and, for some reason, decided to record the fourth,” says Marta Kauffman.

At the time of recording, however, LeBlanc decided to throw himself in the chair and ended up dislocating his shoulder. The special reveals unpublished moments: the actor finishes recording, leaves the stage and shouts “ouch!”. Schwimmer realizes that the friend is not well and signals that the production stop running. He had to be rescued by firefighters on duty at Warner Bros. studios.

To justify Joey showing up with his arm in a sling in the next episodes, the following chapter reveals that the canastrão was injured while having fun jumping on the bed. 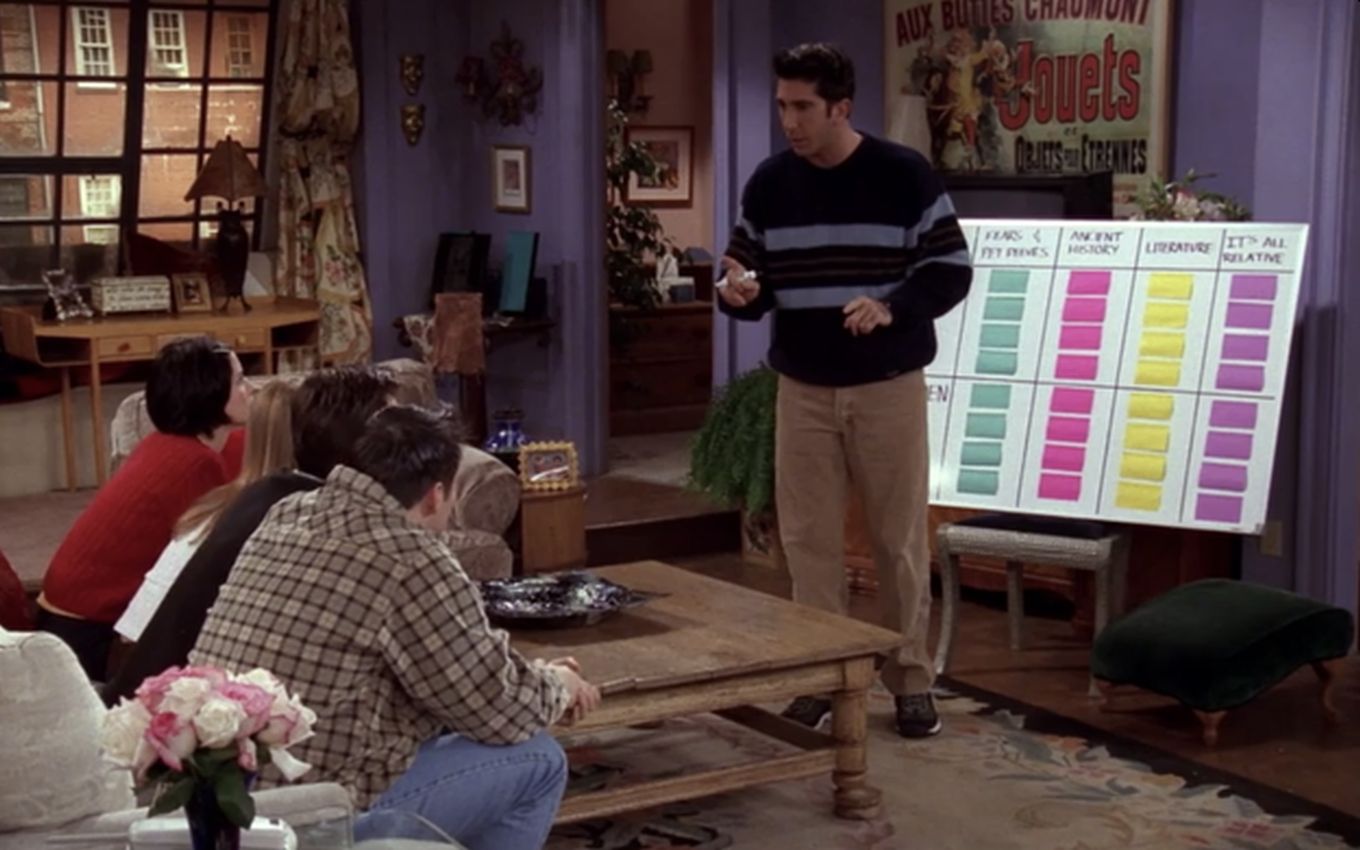 What is Chandler’s job?

One of Friends’ great mysteries, Chandler’s profession also became the subject of the special episode. Part of the meeting puts the cast in a question-and-answer game to see who knows more about the series – similar to the fourth season’s The One With the Embryos.

Matt LeBlanc is invited to meet Joey’s “hand twin” amid some other random hands, Courteney Cox needs to recognize whose voice is on the answering machine –it’s Tom Selleck, who lived Richard, Monica’s ex-boyfriend – and Jennifer Aniston guesses how many pages Rachel’s letter to Ross had about their courtship.

However, the cast fumbles when Selleck questions Chandler’s job. In the original episode, this question leads the girls to be defeated by the boys, who end up temporarily staying with Monica’s apartment. In particular, the answer is revealed: no one knows, not even the creators of the comedy.

How to watch the Friends special?

O especial Friends: The Reuniononly opens on June 29 in Brazil, as a arrival of HBO Max. The program with the main cast meeting will be one of the highlights in WarnerMedia’s new streaming service.

To attend the Friends meeting, Brazilian fans will have to subscribe to the platform, which will offer a 7-day free tasting period.

Watch the meeting trailer below: