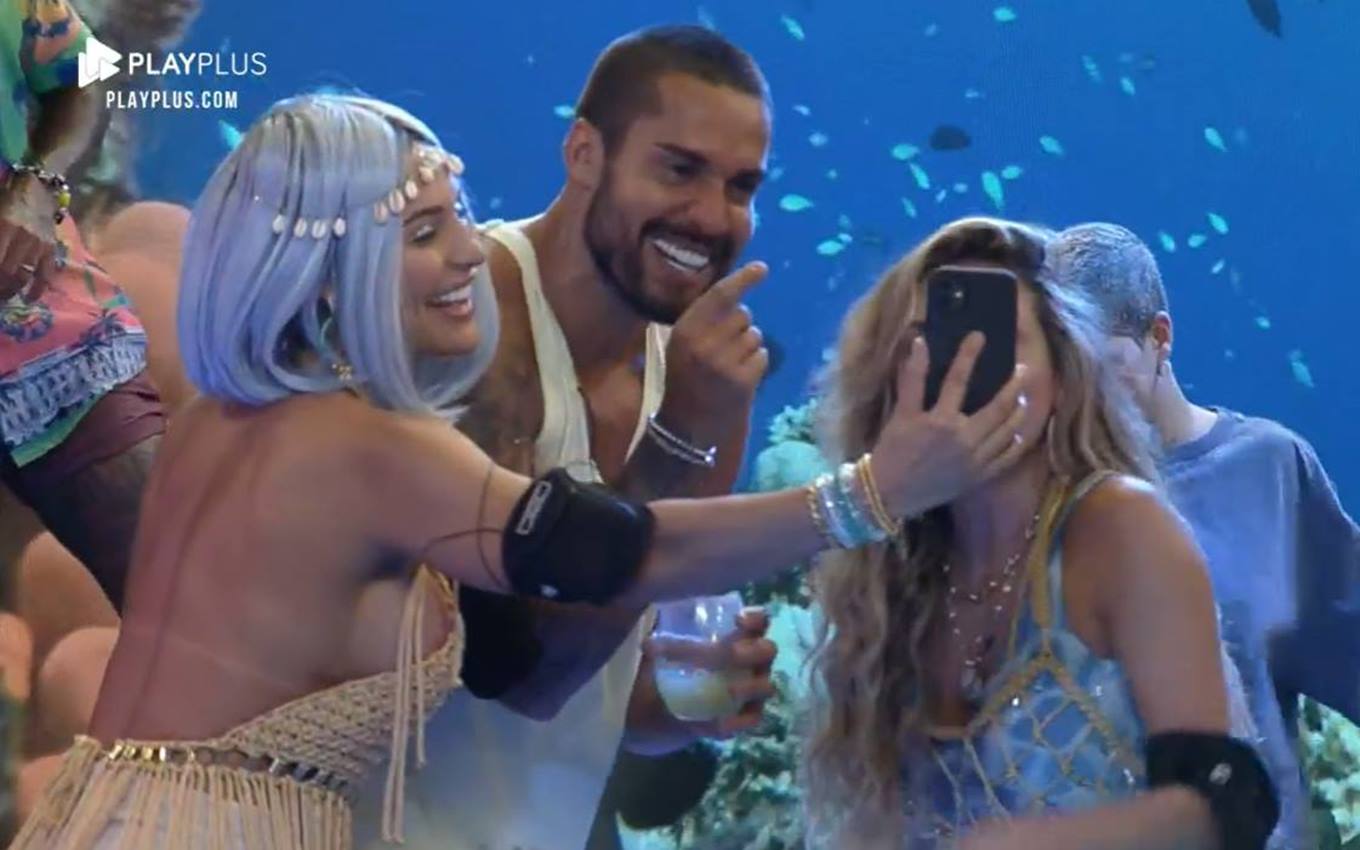 The party this Friday (1st) of A Fazenda 2021 was marked by the arrival of Lary Bottino at the headquarters. The presence of the influencer aroused the curiosity of the other confined and generated gossip. Rico Melquiades, however, left the fraternization earlier and complained: “A boring party”.

Also during the live program, Adriane Galisteu announced that the ex-MTV would enter the house. Record’s audience was able to see the moment when she invaded the party and scared the pedestrians. “Someone is looking for me!” she yelled.

Upon seeing the new resident, Solange Gomes snapped: “Who is this woman, guys?”. Tati Quebra Barraco also assumed not knowing Lary, who arrived to replace Fernanda Medrado after the rapper’s resignation. Gui Araujo, the new inmate’s best friend, ran to hug her. “Go fuck yourself,” he celebrated when he found the piece.

Rico Melquiades was thrilled with the arrival of his friend. “Again together in another reality”, shouted the man from Alagoas, referring to the fact that the two had already participated in the Vacation with Ex Brazil.

Solange gossiped about Lary’s arrival in a conversation with Tati Quebra Barraco. “Wasn’t this girl who was Anitta’s friend and who lived with Anitta?”, asked the model. “No. This is Rico’s and Gui Araujo’s friend. Anitta’s friend was a DJ. I played with her in São Paulo,” replied the funkeira. “Is it another one? So I’m confusing it,” Sol added, despite his remark being right.

Arcrebiano de Araújo dedicated some of his time during the party to pester Dayane Mello. After giving a talk about Erika Schneider’s posture in the game, the model stated that Dayane needs to be careful with her attitudes to avoid getting burned by the public. “I’m not worried,” she snapped.

Erika, in another corner of the party, isolated herself and vented to Rico about comments other attendees are making about her. “I’m really bad. I don’t know what’s happening to me, I’m not like that, no,” she said. The former dancer of Faustão also explained that she had only called Mussunzinho a “sexist” because in fact she had felt disrespected by the actor during her tenure as a farmer.

“I said that because I felt bad. I felt sad, I felt several things, nobody gave me any morals, nobody listened to me. I’m psychologically shaken. I’m starting to think I’m going crazy,” she continued.

Erika also vented on the way she has been treated by Tati Quebra Barraco and spoke about a situation she had witnessed earlier in the house: “She started laughing in my face and went into the room. I don’t know what to think anymore. “.

Rico, for his part, said he also became a target of the house, especially after purposely causing a punishment at headquarters. “I’m the same way. Many people spoke to me again today. The day I gave the punishment. No one spoke to me, nor did you speak properly,” he commented, referring to Erika, Aline Mineiro and Dayane Mello, his allies in the game.

A short time later, Rico left the dance floor, put on his pajamas and went to his bedroom. “What a boring party this is,” fired the man from Alagoas, who had already complained about the lack of alcohol at the party. Valentina Francavilla, Dayane, MC Gui and Solange also retired to bed early.

Check out some moments of the party:

Solange representing us hahaha #The farmpic.twitter.com/qVgw8rE84W

GUYS, DID LARY TAKE ANITTA’S MOTHER’S CLOTHING TOO? #The farmpic.twitter.com/Ge4SEvdS0F

.@bilaraujjo e @daymelloreal talk about life inside and outside reality. For the model, what happened out here doesn’t matter, as long as the pawn sees the opposite. #FestaAFazenda

.@erikaschneider tell the @RicoMelquiades which was very bad when she was a farmer. For the peoa, she was not respected or listened to by the reality shows. #The farm

“This is a boring party, see people?”
– Rico #Afazenda13#The farm

A @GomesSolange think people are afraid of @TatiQBOficial and the funkeira rebuts that, even before entering #The farm, the public didn’t see her as a favorite 👀🔥 #FestaAFazenda

follow by @SigaPlayPlus and see what’s going on with 9 exclusive signs! https://t.co/UpWImxSIbXpic.twitter.com/oZW14Tar06

Follow everything that goes on #The farm fur @SigaPlayPlus and have access to the transmission with 9 exclusive signals: https://t.co/UpWImxSIbXpic.twitter.com/MnYDIuBCue

Track 24 hours of #The farm fur @SigaPlayPlus and get access to the broadcast! https://t.co/UpWImxSIbXpic.twitter.com/1iwY90GbeZ