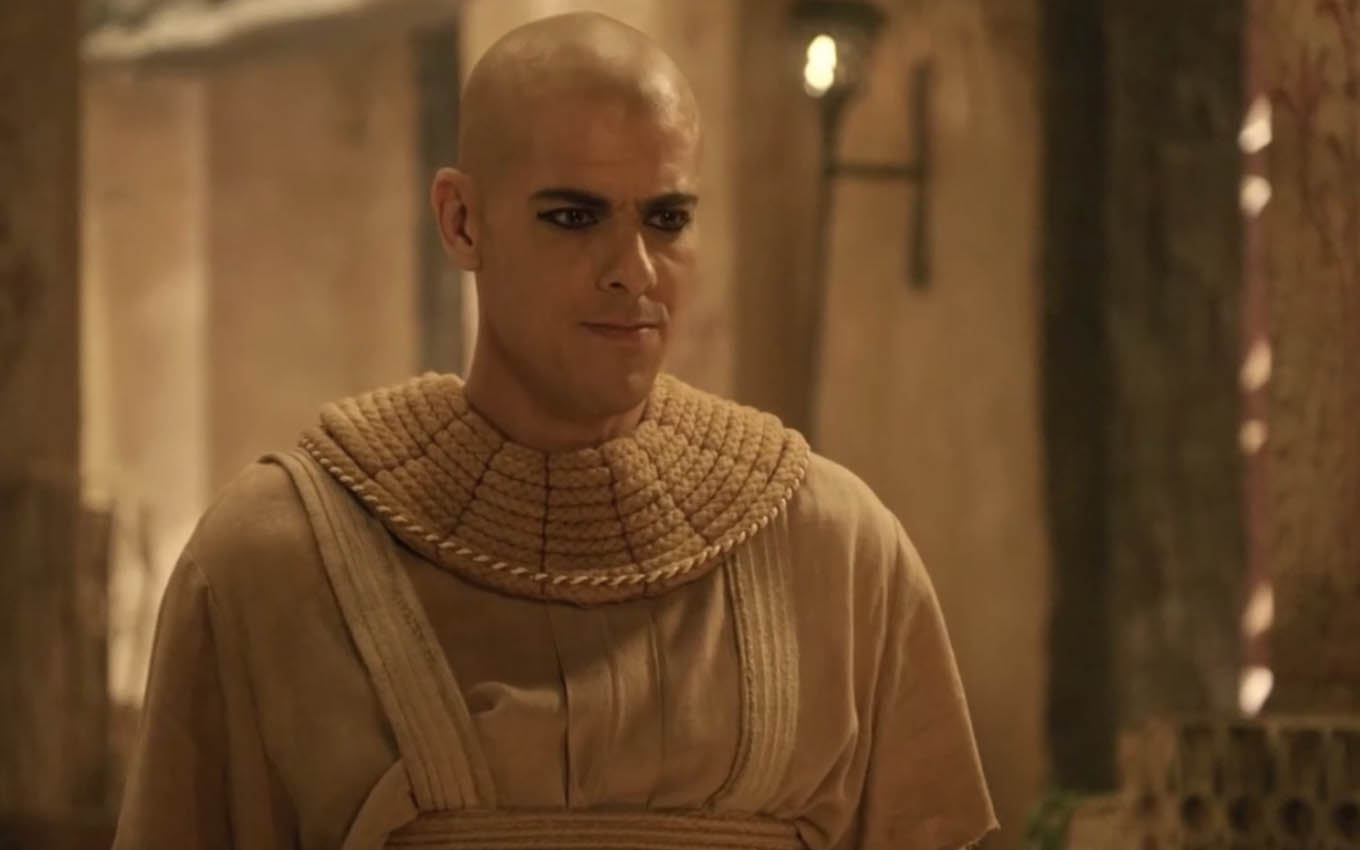 The evils of Atarum (Sacha Bali) have their days numbered in Genesis. Behind several attacks, the chief baker will be unmasked by Adja (Juliana Magalhães) and sentenced to death for high treason. He, however, will still provoke Sheshi (Fernando Pavão) before being beheaded. “Long live Apepi, the only true pharaoh of Egypt,” will cry the villain in the biblical novel.

The Egyptian spared no effort to infiltrate the palace kitchen in the serials by Camilo Pellegrini, Stephanie Ribeiro and Raphaela Castro. He, incidentally, was responsible for having exchanged a bottle of wine for the toxic substance that killed Amarilis (Marianna Alexandre). The criminal even blamed his superior just to take over from him.

Atarum, however, will miss the poison when trying to dispatch Fernando Pavão’s character to the underworld in the scenes that will be shown from next Tuesday (12). The dose will not be enough to finish off the monarch, only so that he has a diarrhea and smears himself in front of his subjects.

Red with embarrassment, Sheshi will order the head chef to be thrown along with Shereder (Paulo Verlings) into the dungeon. They will spend little and good behind bars until the king of Egypt will send Potiphar (Val Perré) to fetch them from prison.

“As you can see, the palace is commemorating the day of my birth. Therefore, I would like to take advantage of the fact that I am feeling benevolent to decide the fate of my baker and my chief butler”, will announce the sovereign.

Sheshi will show that he already knows about Apepi’s scheme to slowly drive him crazy by exonerating Shereder. “Thank you, sovereign. It was never my intention to do any harm, any offense to the guardian of all beings”, will thank the noble. “Serve me. Today you take up the post of chief butler,” will add Kamesha’s husband (Kizi Vaz).

Then he will glare at Sacha Bali’s character:

You are certainly not Apepi’s undercover who did everything and got a place in the palace kitchen, gained everyone’s trust so you could act undetected until you found the right moment during the audience. But something must have gone wrong with your plans, right?

“No, sovereign. I don’t know anything about that. Someone has contaminated your ears with lies,” yells Atarum, who will panic when he sees Adja enter the throne room. “Your wife has told you everything. What reason would she have for lying? May the sentence be carried out”, will indicate the Pharaoh.

“I didn’t do anything. I’m innocent! This woman is crazy. I’m innocent. That’s an injustice,” yells the traitor, as he is dragged away by soldiers. 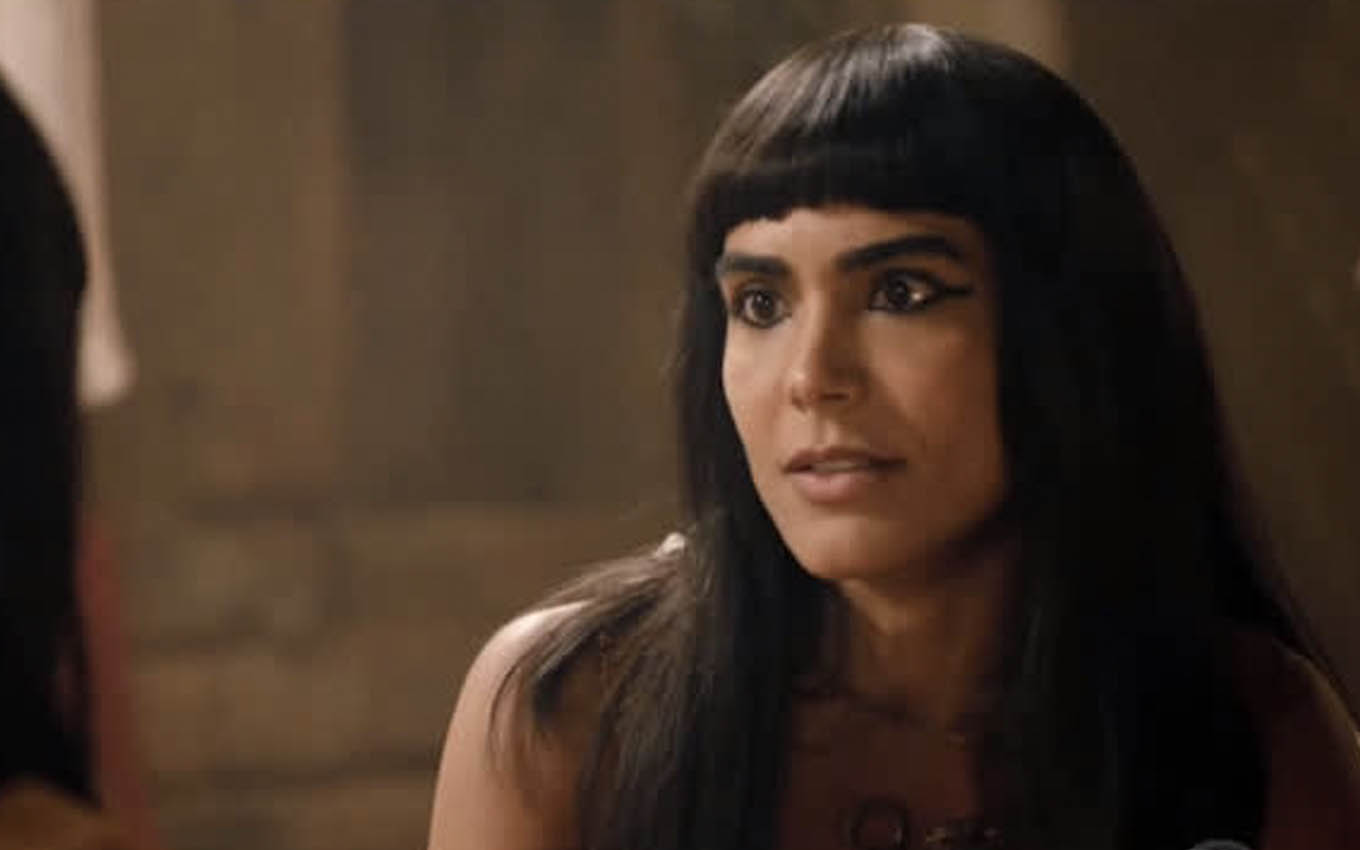 Teruel (Amaurih Oliveira) will tie Atarum to a pole right in front of Adja, who will be forced to watch her husband’s execution. “The chief baker of the Pharaoh’s palace is convicted of crimes of violation of the truth, offense and conspiracy against the king, high treason and attempted murder against the Living Horus. What are his last words?” will announce Potiphar.

The criminal’s expression will instantly change from fear to hate, and he will then attack Sheshi one last time. “Long live Apepi, the only true pharaoh of Egypt,” will cry the bad character, who will literally lose his head on the sword of one of the executioners.