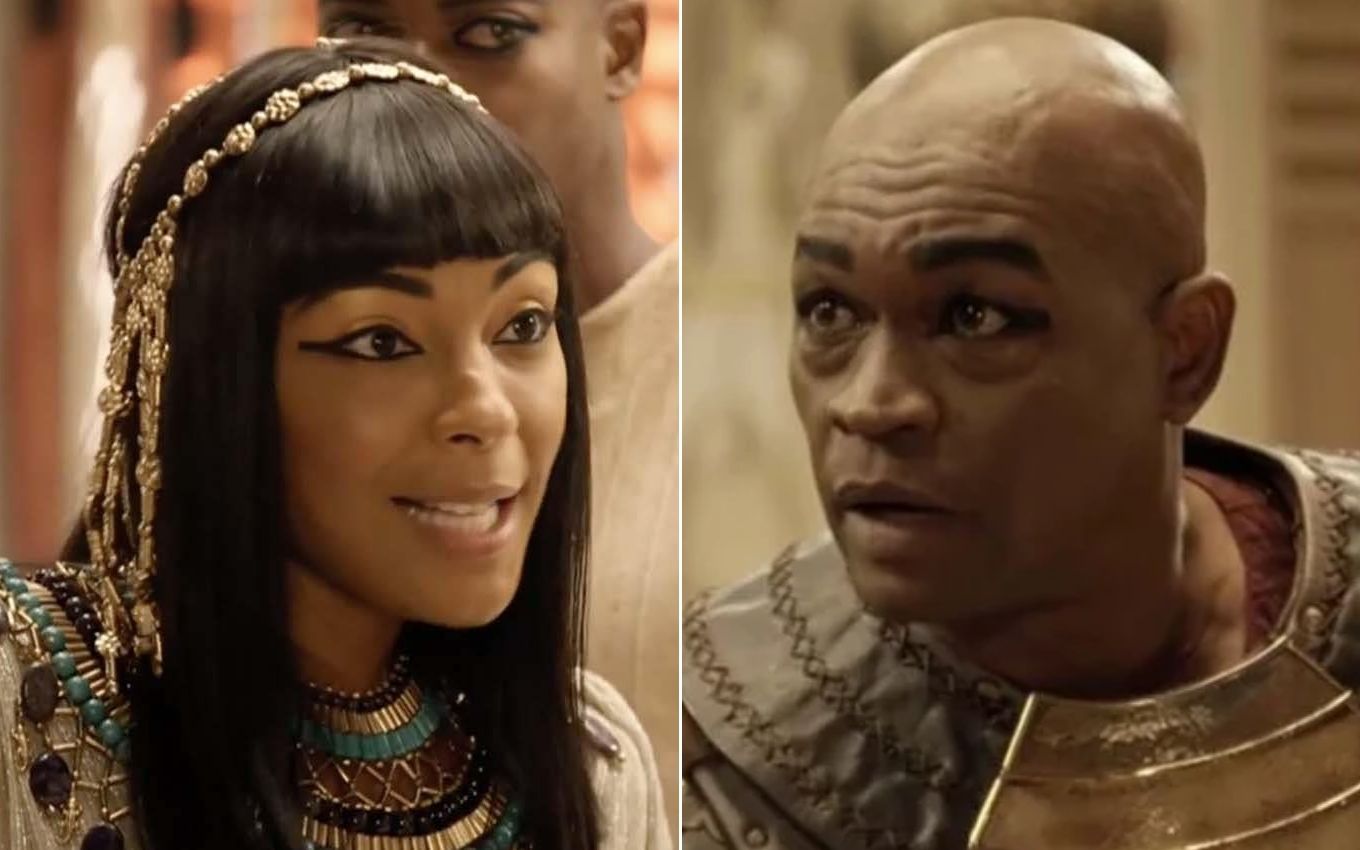 Nepheriades (Dandara Albuquerque) will pay dearly for his lies in Genesis. Potiphar (Val Perré) will discover that José (Juliano Laham) is innocent when he catches his wife in bed with Teruel (Amaurih Oliveira). The military will have the soldier executed, but will reserve a fate worse than death for the “adulteress” — he will cut her nose so that she will never again be desired by another man in Record’s biblical novel.

The general will personally seek his companion to testify on the accusations against the son of Israel (Petrônio Gontijo), who will have fallen in the favor of Sheshi (Fernando Pavão). He will install the Hebrew as governor-general of Egypt for being the only one capable of correctly interpreting a macabre dream.

With an eye on the position, Adurrá (Ricardo Lyra) will outsmart José without imagining that he will actually help him prove his innocence. “He was arrested for trying to rape Potiphar’s wife,” the vizier will cry.

In shock, the monarch will ask Val Perré’s character to bring Neferíades immediately to clarify the entire situation in the serials by Camilo Pellegrini, Stephanie Ribeiro and Raphaela Castro.

Potiphar will be surprised when he arrives home in the middle of the afternoon and finds the naked woman in Teruel’s arms. With blood in his eyes, he will drag the traitors wrapped only in the sheets and in front of Sheshi. “I caught them both in the act of adultery,” the army chief will fire.

After two years of unjust imprisonment, Joseph will finally unmask Nepheriades in front of the entire Egyptian nobility. “It’s a lie of that damned man! A lie, sovereign!”, the shrew will scream, realizing that she will not be able to escape severe punishment.

After all, Sheshi will decree that the protagonist played by Juliano Laham is innocent before leading him back to the position of governor general in the scenes that will be shown from the next Monday (11).

“Then the matter is resolved. Let the guilty one be taken and the sentence for adultery carried out”, will order Merianat’s husband (Samia Abreu).

Nepheriads (Dandara Albuquerque) in the serials

Next, Nepheriades will beg Potiphar for a second chance as she is tied to a post to be exemplarily punished for her betrayal:

i love you i didn’t want [te trair], but happened. I never wanted to hurt you. Mercy, please forgive me. I beg you. I do what you want, I become your servant, but don’t let them do this to me, please. You’re everything to me.

The general, however, will not give in to his wife’s whims one last time. “Fulfill the adulteress’s sentence,” he will order, when he sees a soldier draw his sword to cut off the noblewoman’s nose.

Potiphar will even turn his face away so as not to see Neferiades mutilated, then demands that she be expelled from Avaris still covered in blood. “Untie her and throw her out of the palace. Then execute the bastard,” the soldier will say, referring to Teruel.