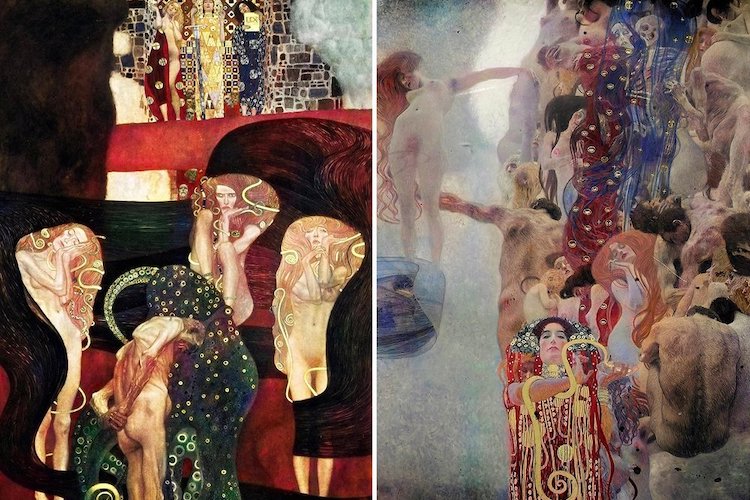 Austrian painter Gustav Klimt created some of his best-known works during the so-called Golden Phase – which remained alive during the first decade of the 20th century.

During his most inspiring period, the artist produced works such as “Portrait of Adele Bloch-Bauer I” (1907) – which depicts an elegant woman wearing a geometric dress and is surrounded by a sea of ​​gold, or “The Kiss ” (1908) – which portrays a sensual scene, where two passionate lovers embrace in a field of flowers.

However, despite its uniqueness, not all of the Austrian’s works have survived intact to this day. You Nazi Assaults During World War II led to the destruction of valuable Klimt paintings.

Some of the paintings that ended up being destroyed were the “Faculty Paintings” they represented, writes the Smithsonian Magazine, three allegorical scenes entitled “Philosophy, Medicine and Jurisprudence”. The works were created for the University of Vienna, but later were rejected for being excessively critical of science.

In 1945, just days before the end of World War II, the paintings were eventually destroyed in a Immendorf Castle fire, in Austria.

Now, a team of art historians has taken an interest in analyzing the paintings in a different way: not just using the photographs available in black and white, but through technology.

The specialists restored the historic paintings with approximations of their original colors, offering the viewer a more real sense of what Klimt’s works looked like before they were destroyed by fire.

To create the images, Google Arts and Culture and the Belvedere Museum in Vienna developed a tool that collected information about color usage by Klimt from different sources.

According to the ART News, the dataset included contemporary journalistic descriptions of the paintings, one million photos, and 80 color reproductions of Klimt paintings from the same period.

In a statement, Franz Smola, curator of the Belvedere Museum, says: “the result was surprising because we were able to color [as obras de Klimt] even in places where we had no knowledge. With the help of technology, we have good assumptions that Klimt used certain colors.”

Today, art lovers can explore these recreations through a new Google Arts & Culture gallery that brings a retrospective of the painter Gustav Klimt, where access can be obtained in the browser or in the Google project application.

The reconstructed paintings are combined with a virtual exhibition, “Klimt vs. Klimt: The Man of Contradictions”, which explores the painter’s idiosyncratic life and legacy.

The retrospective brings together more than 120 of the artist’s most famous masterpieces, as well as lesser-known works, and brings together an expertly curated selection in an immersive augmented reality and 3D Pocket Gallery.