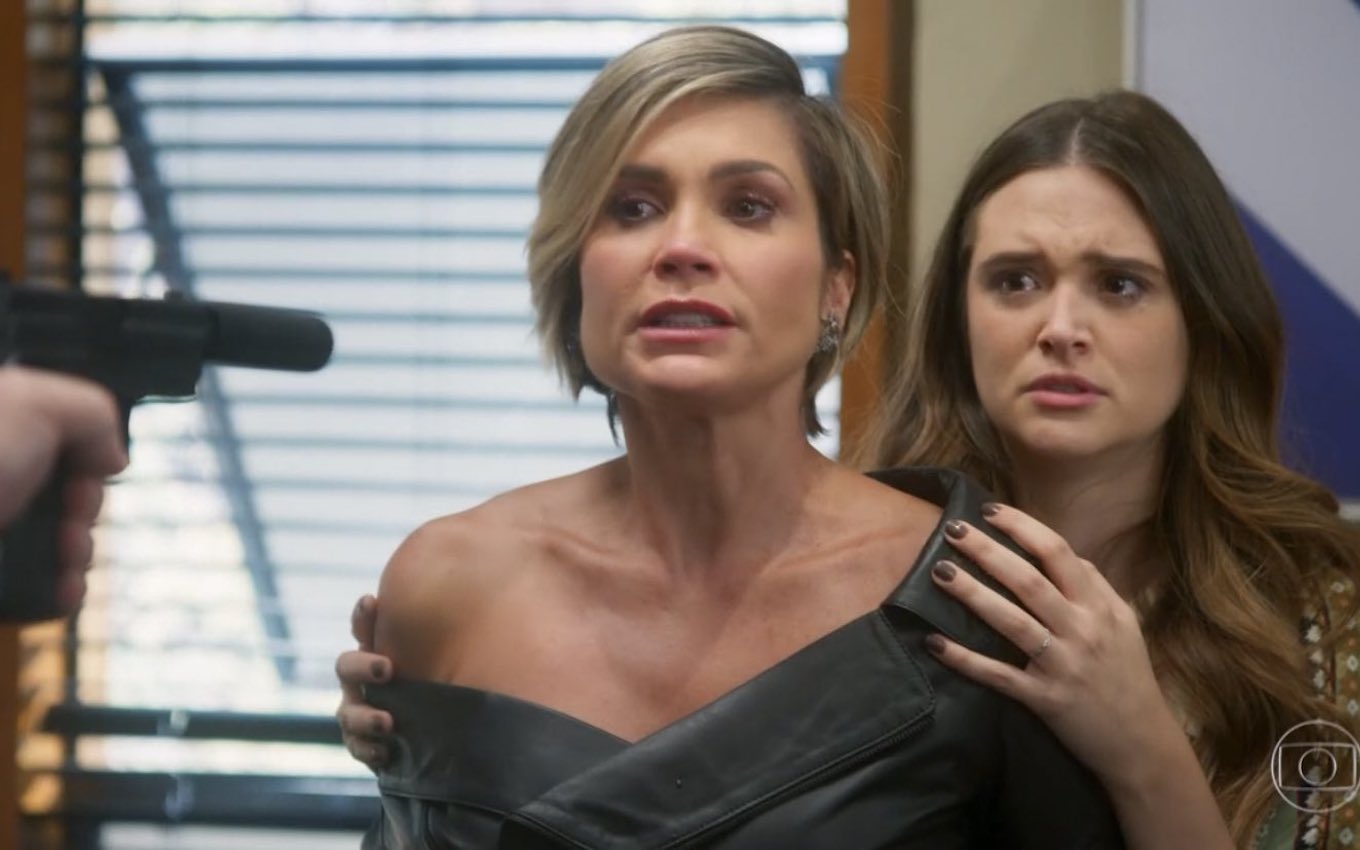 In a farewell mood, Save Yourself Quem Puder will put Luna/Fiona (Juliana Paiva) once again in the eye of the hurricane. After the girl is taken hostage by Hugo (Leopoldo Pacheco), she will be used as a shield for him to escape the police. The villain plans to murder her. Helena (Flávia Alessandra), however, will prevent her husband from dragging her heiress to her death in Globo’s seven o’clock soap opera.

With that, the businesswoman will end up pushing him towards a tragic outcome in Daniel Ortiz’s serials. The blonde will hit the villain with a fire extinguisher on the head, and he will fall into an open space in the gastronomic center he built for her and die instantly.

Luna will dodge death in this way once more. The Mexican escaped from the henchmen of Dominique (Guilhermina Guinle) at the beginning of the plot. She was presumed dead, but was reunited with the bloodthirsty lawyer precisely in the chapter that marked the end of the “first season” of Salve-se Quem Cander.

The serial was interrupted last year when Luna came face to face with the bandit. This year, Globo re-presented almost all the chapters of the first phase of history before showing the 53 unpublished episodes that were needed to close the saga started in Cancún (Mexico).

The viewer has been following the owner of the Página Paulista newspaper committing a series of atrocities since last week. He used Helena as bait to catch Luna, who could end his corruption scheme.

Leopoldo Pacheco’s character tried to kill the Mexican woman, but he got in the way. She escaped and ran to the Emporium Delight. In the gastronomic center office, mother and daughter will be handcuffed, gagged and face the real face of the jerk.

Hugo will reveal all the atrocities he committed for Helena to become his wife — which includes making her swallow drug capsules, believe in the threats from drug dealers that didn’t exist, being trapped in the United States for months and still living all her life believing that daughter and her husband were murdered because of you. The scenes are scheduled to air this Monday (12) in the seven o’clock soap opera.

Hugo (Leopoldo Pacheco) will die in the soap opera

Téo’s father (Felipe Simas) will keep them locked up until the place is completely empty. When you’re ready to run away, taking them both to kill them and disappear with their bodies, he will be surprised by his son’s arrival. Suspicious, the filmmaker will have called the police.

Hugo will grab Luna by the neck and try to run away with a gun pointed at her head. “Don’t come close, Teo! Ammo is what this weapon doesn’t lack”, will shout the madman. In this part of the sequence, Daniel Ortiz detailed in the script how everything should be recorded:

Taking advantage of the fact that Luna, Hugo and Téo are distracted, Helena drags herself towards a corridor. alejandro [Rodrigo Simas] he looks at her without understanding, Helena ‘shws’. Hugo climbs the last flight of steps without seeing the movement below. Cut to Helena, who is already out of their field of vision. She goes straight to the elevator, presses the button and enters. Cut to Hugo, who has now reached the top of the stairs, where the glass was broken [em cena anterior] and there is no protection.

“Teo, don’t make me lose my mind,” the villain will shout when he sees his son walking towards him. “Father, please leave Luna…”, the young man will ask. “But he’s really stubborn,” Hugo yells, before shooting at a glass, which will explode.

“The next shot is going to be this miserable woman who destroyed my life,” warns the psychopath. “No, it won’t be at Luna”, will raise Helena’s voice, who will use a fire extinguisher to hit the criminal on the head with all her strength.

With the blow, he will lose his balance and fall from the top of the stairs. “I think I killed your father, Teo! But he forced me… I didn’t have a choice”, the blonde will stammer, trembling.

The only new telenovela on Globo, Salve-se Quem Puder is all recorded and ends this Friday (16). The rerun of Pega Pega (2017) will go into the 7pm band afterwards because the network decided to postpone the premiere of Quem Mais Vida, Melhor.