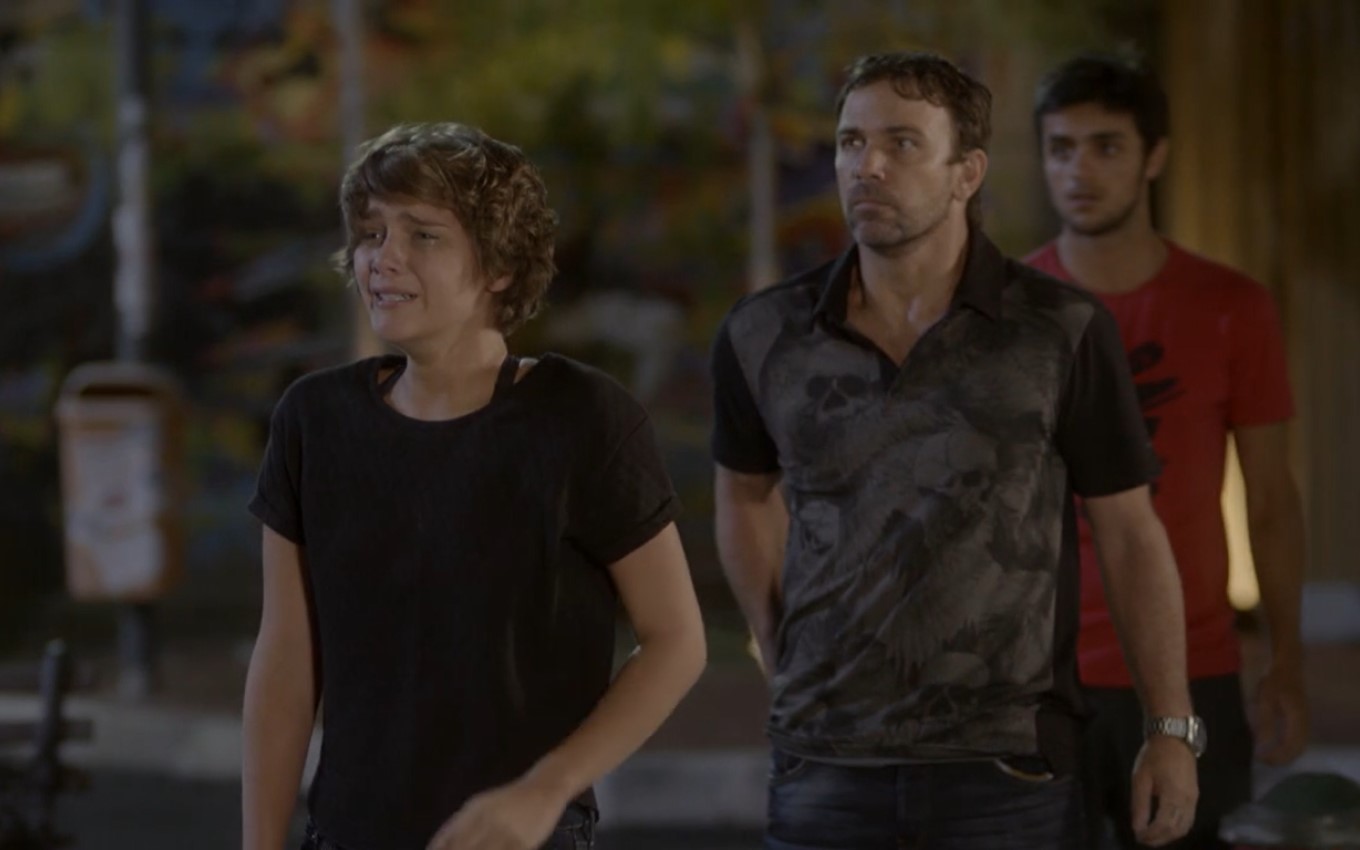 SUMMARY: Lobão (Marcelo Faria) will attack Gael (Eriberto Leão) with a fake DNA test and claim that he had an affair with his rival’s wife. The villain will tell Karina (Isabella Santoni) that he is his father and will take advantage of a moment of weakness in the girl to win her over. The blonde will be touched because she found out that Pedro (Rafael Vitti) was paid to date her. She will decide to move in with the imposter

Second, 8/30 (Chapter 155)
Ribalta’s teachers insist that Bianca do the play. Lucrezia tells Jade that she is disappointed with her daughter’s levity. Cobra ends the relationship with Jade. Duca confronts Lobão and Cobra. Bianca enters the stage. Lobão reveals the result of the DNA test to Cobra, who asks him to be careful with Karina. Cobra helps Pedro find Karina.

Tuesday, 8/31 (Chapter 156)
Pedro tries to explain himself to Karina, but the girl is adamant. Bianca is successful with her performance. Bianca and João are selected as the best actors in the play. Karina claims that Bianca is no longer her sister.

Jade and Lucrecia argue, and the girl ends up passing out. Bianca confronts Gael and implies that he is hiding something from Karina. Karina overhears when Bianca says that Gael might not be her father.

Wednesday, 9/1 (Chapter 157)
Gael tells the supposed story of Ana and René to Karina, who despairs. Lucrezia discovers she has an infection, and Edgard and Jade support her. Karina asks Cobra for help. Gael asks Duca to accompany Bianca so he can be alone.

Cobra tells Lobão that he believes Karina should know the truth soon. Bianca asks Dandara for help. Jade prays that her mother gets better, and Edgard is surprised. Dandara supports Gael. With Cobra’s help, Lobão finds Karina and tells the result of the DNA test.

Thursday, 2/9 (Chapter 158)
Lobão and Gael face off and Karina is sick. Dalva encourages Duca and Bianca to stay together. Jade tells all the setups to Edgard, promising that he will be a good person. Lobão invents that he had an affair with Ana and Gael despairs. Karina decides to leave with Lobão, and Cobra assures Gael that he will accompany the two.

Dandara tries to talk to René to find out the truth about Ana and Lobão, but can’t talk to her ex-husband. Karina goes to Nat’s house, and Cobra tells Gael, who asks Duca to check on his daughter’s condition. Delma and Marcelo try to cheer Pedro up. Lobão asks Luiz for a secret about the falsification of the DNA test. Karina prepares to fight the Khan when Gael appears to take her away.

Friday, 3/9 (Chapter 159)
Lobão refuses to hand over Karina and encourages the girl to compete in the Warriors championship. Delma asks Nando to talk to Pedro. Gael interrupts the fight between Karina and Diego, and the girl leaves the gym accompanied by Lobão.

Bianca tells Edgard that she is unable to act. Nando convinces Pedro to try to win back Karina. Heideguer asks Lobão to give up fighting for Karina’s guard. Jade apologizes to Bianca for her setup.

Lobão hands Karina a copy of the Warriors application, and Cobra and Nat offer to train with her. Jade claims she is a new person, but Barbara is suspicious of the statement. Lucrecia gets emotional when she sees Jade playing Juliet.