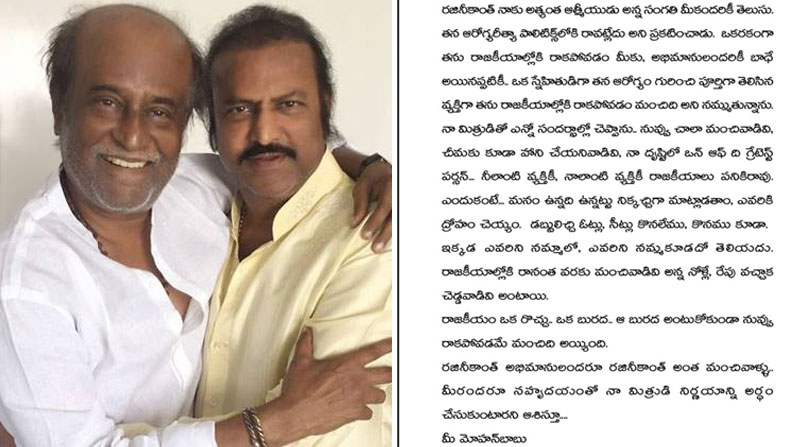 The news that superstar Rajinikanth is making an entry into politics has created a sensation among Tamil actors. If some people welcome his coming into politics ..

Mohan Babu Reaction: The news that superstar Rajinikanth is making an entry into politics has created a sensation among Tamil actors. Some welcomed his entry into politics while others wished he had not entered politics. However, Rajini fell ill while trying to announce the name of the party in a few days. He was treated at Apollo in Hyderabad. The superstar has announced that he is not coming into politics due to age and ill health. Many reacted to Rajinikanth’s decision. However, there were also differences of opinion on Rajinikanth’s decision. Recently his friend actor Mohan Babu responded.

Mohan Babu has released a letter on the superstar’s departure from politics. You all know that Rajinikanth is very dear to me. He declared that he was not coming into politics due to his health. I believe that it is better for Rajini not to get into politics as a person who is fully aware of his health as a friend even though in a way he and all the fans are suffering that he is not getting into politics. I have said this on many occasions with my friend. You are good. They are also harmless to ants. You are one of the greatest person in my view .. For a person like you, for a person like me, politics is useless. Because money cannot buy votes and seats. They are the ones who are good until they enter politics .. They are said to be bad after coming tomorrow. Politics is a mud. It’s good that you’re not sticking to that mud. All Rajinikanth fans are as good as Rajinikanth. I hope all of you kindly understand the decision my friend made. Mohan Babu said in his letter.