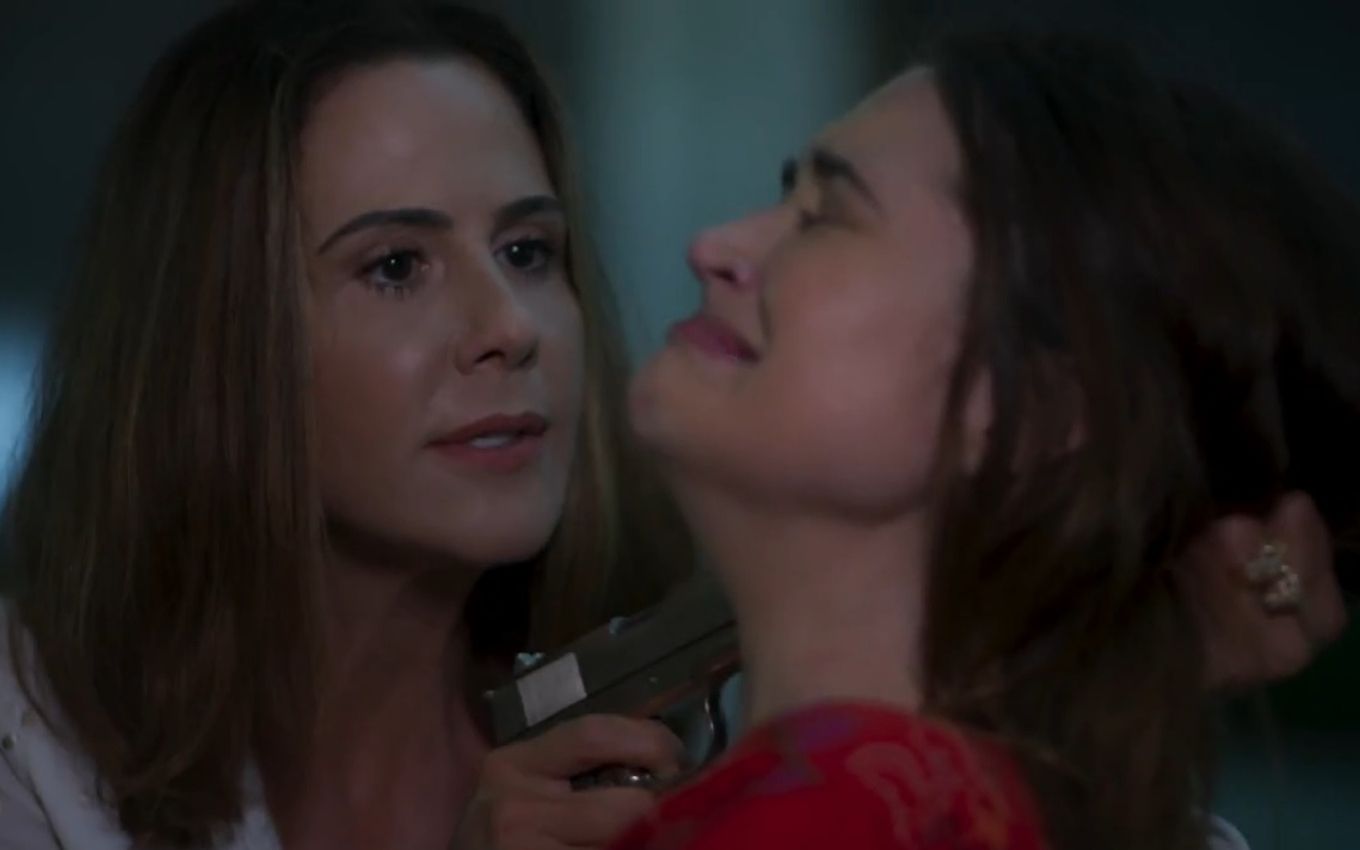 Luna / Fiona (Juliana Paiva) will live moments of terror at the hands of Dominique (Guilhermina Guinle) in the return of the unpublished chapters of Salve-se Quem Puder. The young lady will be kidnapped, dragged by her hair and will be targeted by the villain’s weapon in the Globo soap opera. The second part of Daniel Ortiz’s plot will be shown starting on May 17th.

In March 2020, when the show had to be stopped due to the Covid-19 pandemic, the public saw the Mexican woman being chased by Renzo’s aunt (Rafael Cardoso) in the last scenes of the “first season”.

Alexia / Josimara’s friend (Deborah Secco) was almost run over by the bad girl when she was arriving at Empório Delícia. When rescuing the girl, the criminal immediately recognized the witness of the crime she had committed in Mexico. “My God, it is not possible. It cannot be one of them. They are dead”, doubted the witch.

Luna even tried to escape, however, she was threatened and ended up in the sight of the bandit’s gun. “Please don’t do that. You are mistaking me for someone else,” lied Ermelinda’s protégé (Grace Gianoukas).

“Will it? You will have to prove it to me now. Be quiet, without shouting. Come with me and nothing to make a fuss, listen? Come on!”, Ordered the character of Guilhermina Guinle in the final sequence of the last unpublished chapter shown.

Luna / Fiona despairs when she sees the villain

Is it the end of the Mexican?

The story will return exactly where it left off, and the audience will see the continuation of the scene in which Dominique will take the Mexican by the hair and throw her in her car. “I already said, you are mistaking me for someone else!”, Says Kyra / Cleyde’s friend (Vitória Strada).

“Oh, yeah? So why did you run away when you saw me? Of course you know who I am,” will fire the vixen, pulling the young woman’s locks further and making her scream.

“Get in soon! And without shouting, otherwise you will get shot in the head. Don’t you dare peep! Get down there so nobody can see you”, will send the criminal, while pushing the girl into the vehicle. Dominique will call Edu (Jerônimo Martins) and order the lover to find her immediately.

“While we wait, why don’t you tell me how you survived? Are the other two who were with you in Cancún also alive?”, Asks Renzo’s aunt. “I don’t know what you’re talking about. Please, let me go,” will ask Mário’s daughter (Murilo Rosa).

The criminal will again grab the hostage’s hair tightly. “You will speak! For better or for worse I will take the truth from you, understand? I do not remember your name, but the others I know were Alexia and Kyra”, recalls the blonde. “I never heard those names. I don’t know who you are talking about”, will insist the protagonist lived by Juliana Paiva.

Edu will arrive at the place, and the bloodthirsty will send him to watch over the young woman in the back seat of his car. “If she tries anything, she shoots. She just doesn’t shoot to kill, because she has a lot to tell,” will order the criminal gangster led by Hugo (Leopoldo Pacheco).

Save Yourself Who Can Re-present the chapters that have already aired. The rerun was “wiped out” and will have, in all, six episodes less than what the public saw last year. The unpublished chapters of the newsletter will be shown starting this month. The telenovela is already completely recorded and will end in July, giving way to the novel Quanto Mais Vida, Melhor.

In addition to the spoilers, the TV News publishes daily summaries of the novel written by Daniel Ortiz.