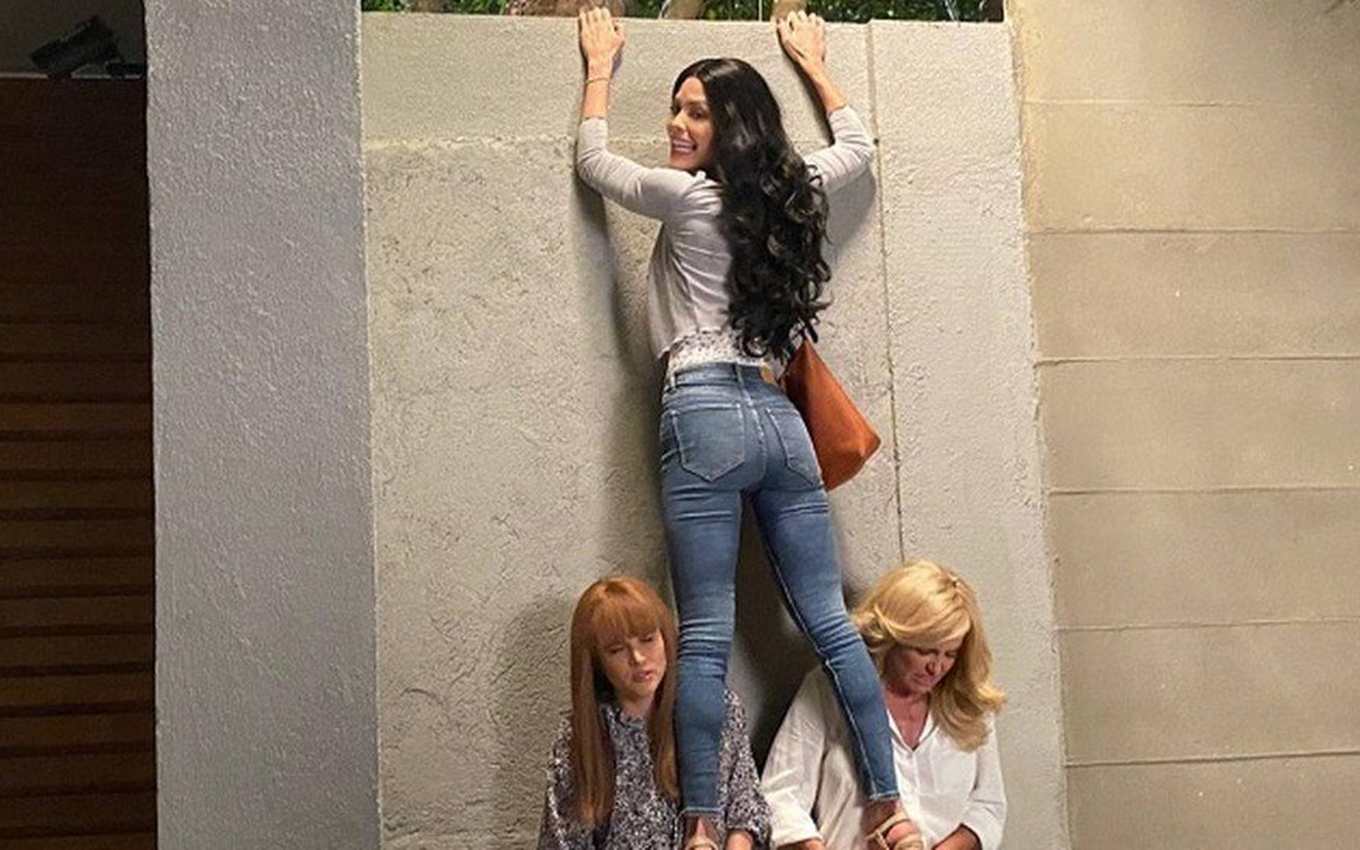 In disguise, Kyra/Cleyde (Vitória Strada), Luna/Fiona (Juliana Paiva) and Alexia/Josimara (Deborah Secco) will invade the house of Dominique (Guilhermina Guinle) in Salve-se Quem Puder. Committed to putting the bandit in jail to get their lives back, they won’t mind the risks and will jump over the wall to steal the spreadsheet with the names of the gang the villain is part of in Globo’s seven o’clock soap opera.

The trio of friends will not give up on searching Dominique’s computer to prove that she is responsible for the murder of Judge Vitório (Ailton Graça) in Cancún.

The arrest of Renzo’s aunt (Rafael Cardoso) will mean the girls will return to their lives before the whole mess, far from the Witness Protection Program.

The next chapters of Daniel Ortiz’s plot, Alexia will have gotten the key to the house of the bandit, after being introduced to Lucia (Cristina Pereira) by Renzo. The actress will lead the invasion of the residence, taking advantage of a trip by Hugo’s partner (Leopoldo Pacheco) to Brasília and the visit of the “magic boy” to the theater. He, by the way, will be waiting for the redhead in the place.

The friends will disguise themselves in wigs and take a taxi to Dominique’s address. “It’s going to be all right! Tonight will be historic! The night of our freedom!”, Alexia will say as she kisses the key.

“I’m shaking with fear,” Kyra will confess. “And I’m dying to get my hand on the worksheet for this hell to end!”, Luna will add. “The time has come! Farewell, Protection Program”, the actress will conclude.

Without knowing it, they will be followed by Zezinho (João Baldasserini) and Ermelinda (Grace Gianoukas), with the chicken Filipa in her lap.

In front of the mansion, Luna and Kyra will see that some spots are monitored by cameras and will decide to climb the wall in an open corner to the street. That’s when Zezinho and Ermelinda will appear.

“As crazy are breaking into a house? But aren’t they… Or are they?”, the lady will ask, confused by the wig worn by the invaders. “It’s a bit far away, has I know the shapes of body, mostly from one. He has why the hair so different?”, the hillbilly won’t understand either.

Ermelinda will soon understand that her protégés are wearing a wig and will call her son to meet them. Meanwhile, with the help of her friends to scale the wall, Kyra is the one who will move to the other side first, and soon will be followed by Luna and Alexia.

Zezinho and Ermelinda will join their friends

After the suffocation to get over the wall, they will hear a cackling, and Alexia will come face to face with Zezinho, Ermelinda and Filipa. “My mistress of the busted! You had nothing to come after us!”, startled.

The girls will be scolded, but they will soon try to explain that this is Dominique’s house. “The Federal Police had to be here, no you three,” will enrage Zezinho.

With no way out, mother and son will decide to help their protégés on the mission. With gloves and flashlights, Alexia will open the back door of the house. “No alarm. Phew!”, she will comment with relief. But when the five enter, a light on the wall will start to flash without them noticing. In Brasília, Dominique’s cell phone will beep. “What is going on?”, the villain will ask.