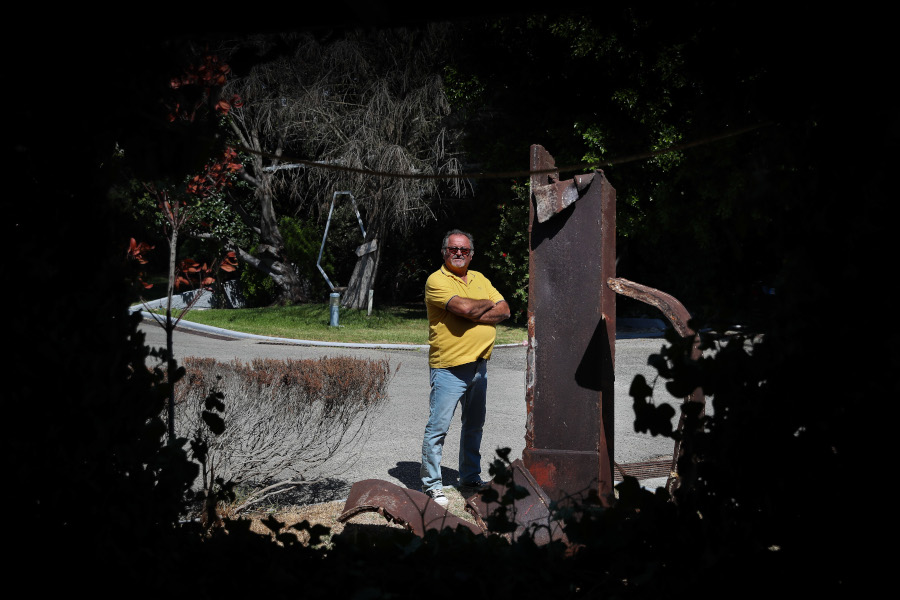 Beam of the World Trade Center in Alverca.

A beam of the Twin Towers that was destroyed in the attacks of September 11, 2001, in New York, is on a private farm in Alverca waiting to be exposed in a public place.

The beam, weighing about 2.5 tons, arrived at a farm located in the municipality of Vila Franca de Xira a few months after September 11th. The owner of the space paid about eight thousand euros for your boat transport from the United States to Portugal.

Ernesto Cabeça, 66 years old, lived in New York in 2001 but was already preparing his return to Portugal, when he learned that they were offering the countries scraps of materials that left over from the rubble of the Twin Towers (World Trade Center).

So, he didn’t hesitate to borrow a truck from your brother to transport the piece to the boat, which would also transport the rest of his belongings to Portugal, as he tells the Lusa agency, in a conversation next to this piece of iron, exposed at the entrance to Quinta do Barco.

“This is to symbolize our Portuguese. The sacrifice we had. How much it costs to be an emigrant”, emphasizes Ernesto Cabeça à Lusa.

Over these two decades, the former emigrant made several contacts, namely with the Alverca Parish Council, to try to frame this beam, “belonging to floors 51 or 52” of the Twin Towers, in a public space. But it still hasn’t managed to fulfill that goal.

Piece can be displayed “in a roundabout or in a garden”

The president of the Parish Council of Alverca, Carlos Gonçalves, tells Lusa that he became aware of the existence of this beam “not long ago” and that the municipality “is available” to find a public place to exhibit the piece..

“We want to do this soon. could be put in a roundabout or in a garden. Maybe on the 11th of September next year it will be inaugurated”, anticipates Carlos Gonçalves.

However, the mayor notes that the Parish Council does not have the funds to pay Ernesto Cabeça for his expenses with transport and maintenance of the beam.

Emigrant wants to “make a monument”

While the day to hand over the beam doesn’t happen, Ernesto Cabeça keeps thinking about how the piece can be valued and framed.

“My idea was to make an image in iron and plate of the two towers and put it [a viga] in the middle. Make a monument. I have an architect and I’ve already told him that”, he reveals to Lusa.

You 2001 bombings killed 2,977 people in three distinct locations: the Twin Towers of the World Trade Center in New York, the Pentagon, Department of Defense headquarters in Arlington (Virginia), and Shanksville (Pennsylvania).

Also the 19 terrorists died who hijacked and piloted the four planes used in the operation: five in each of the three aircraft that hit the Twin Towers and the Pentagon, and four in which crashed 20 minutes into the flight from Washington.