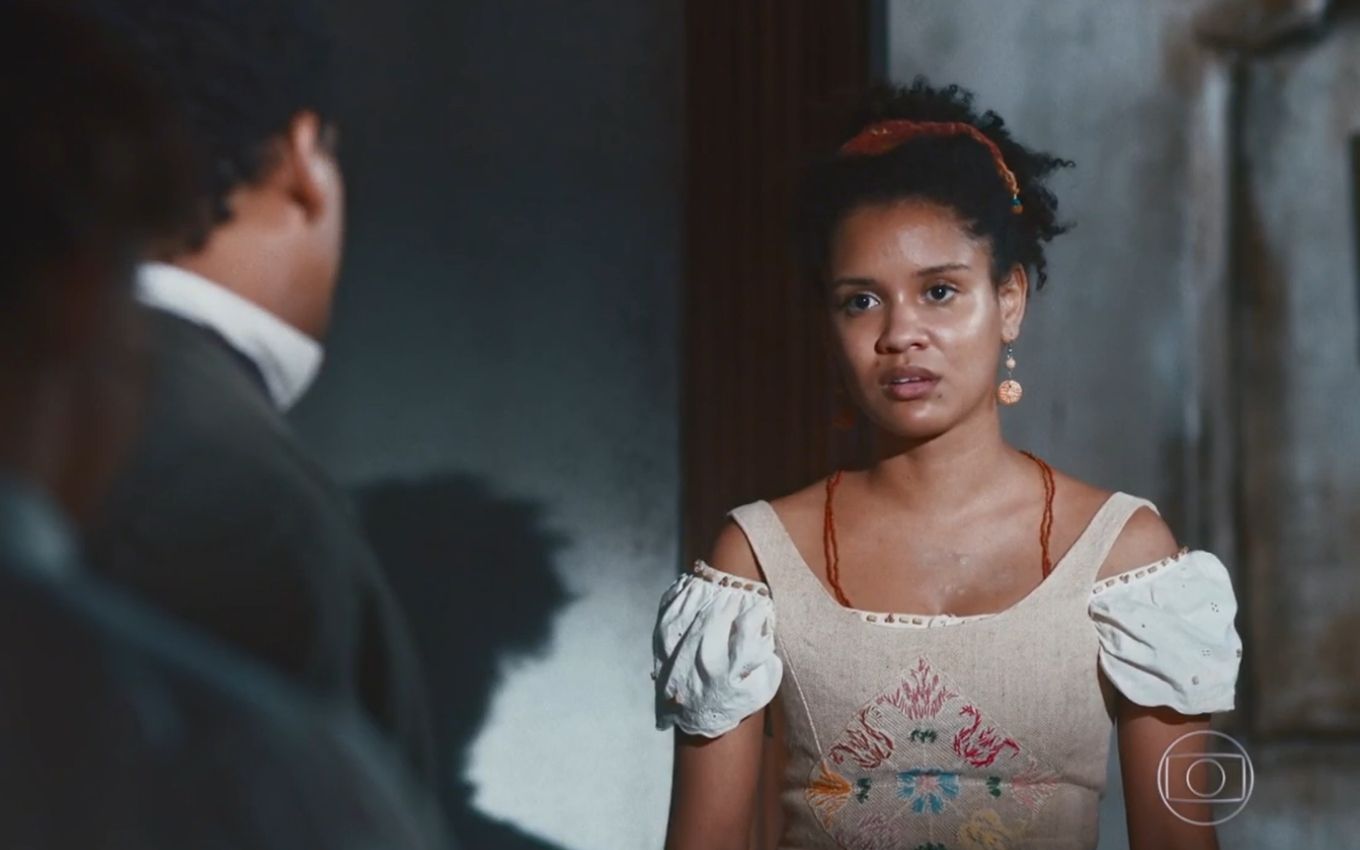 Second, 10/18 (Chapter 61)
Zayla discovers that Samuel’s letter of manumission is false. Gaston is only interested in Isabel and Leopoldina gets annoyed. Tonico threatens Samuel. Pedro is jealous of Dumas with Teresa. Augusto confronts Bernardinho and assures Leopoldina that the boy is not a naval officer. Pilar suffers when she sees Dolores being humiliated by Tonico. Auction throws Bernardinho out of the house.

Gastão and Augusto talk about Isabel’s choice of one of the two. Vitória and Quinzinho discuss the management of the casino. Tonico demands that Nélio teach Dolores. Caxias and Mauá regret that Tonico sabotaged the vote on the works conducted by Samuel. Tonico looks for Zayla.

Tuesday, 10/19 (Chapter 62)
Tonico says he wants to be with Zayla. Nélio starts teaching Dolores. Luísa comments to Pedro that their relationship seems to be coming to an end. Samuel claims that his secret from the past must be hidden.

Lupita convinces Lota to return to Pindamonhangaba, but the baroness insists that the girl accompany her. Nino makes an important discovery about emperors. Luísa concludes that Leopoldina liked Augusto. Samuel demands that Tonico get away from Zayla.

Wednesday, 10/20 (Chapter 63)
Teresa encourages Isabel to stay with Augusto. Luísa comments to Dumas that she wants Gastão to be chosen by the future empress. Pilar believes Tonico has other intentions when approaching Zayla. Teresa provokes Pedro with the proximity of Dumas and Luísa.

Zayla probes Guebo about Samuel and discovers that the ex-fiancé has been looking for his sister Mariana. Quinzinho cannot convince Lota to stay in Rio de Janeiro. Samuel’s project is approved in the Chamber, and Pedro congratulates him. Borges arrests Guebo.

Tonico presents Zayla with a jewel. Olu alerts Samuel and Pilar about Gebo’s arrest. Candida suspects that Zayla is using Guebo. Diego agrees to defend Guebo on Pilar’s behalf, and Samuel gets annoyed. Zayla discovers that Samuel and Justina were Colonel Ambrose’s captives.

Friday, 10/22 (Chapter 65)
Zayla is pleased to discover that Samuel was Tonico’s father’s captive. Vitória decides to enroll Prisca and Hilário in the school. Teresa celebrates the disagreement between Isabel and Gastão. Samuel is jealous of Pilar with Diego. Gaston deduces that Augusto likes Leopoldina. Zayla makes up an excuse and gives Tonico’s jewelry to Dolores.

Lupita demands that Quinzinho seduce Lota and keep her away from Batista. Zayla probes Dolores about the story of Tonico’s father’s death. Luísa comments to Leopoldina that she believes Augusto likes the princess. Diego frees Guebo and Jamil. Gastão reveals his passion for Isabel.

Saturday, 10/23 (Chapter 66)
Isabel questions Gaston’s statement. Zayla ends her relationship with Guebo. Tonico distrusts Zayla’s intentions as he approaches Dolores. Gastão tells Luísa that if Isabel doesn’t choose him, he won’t marry Leopoldina. Bernardinho despairs when he learns that the supposed ship Batista was on has sunk. Batista thinks about letting Lota think he’s dead. Pedro plans a way to continue his romance with Luísa after the princesses’ wedding. Guebo warns Samuel about Zayla. Zayla discovers that Samuel is accused of murdering Tonico’s father.