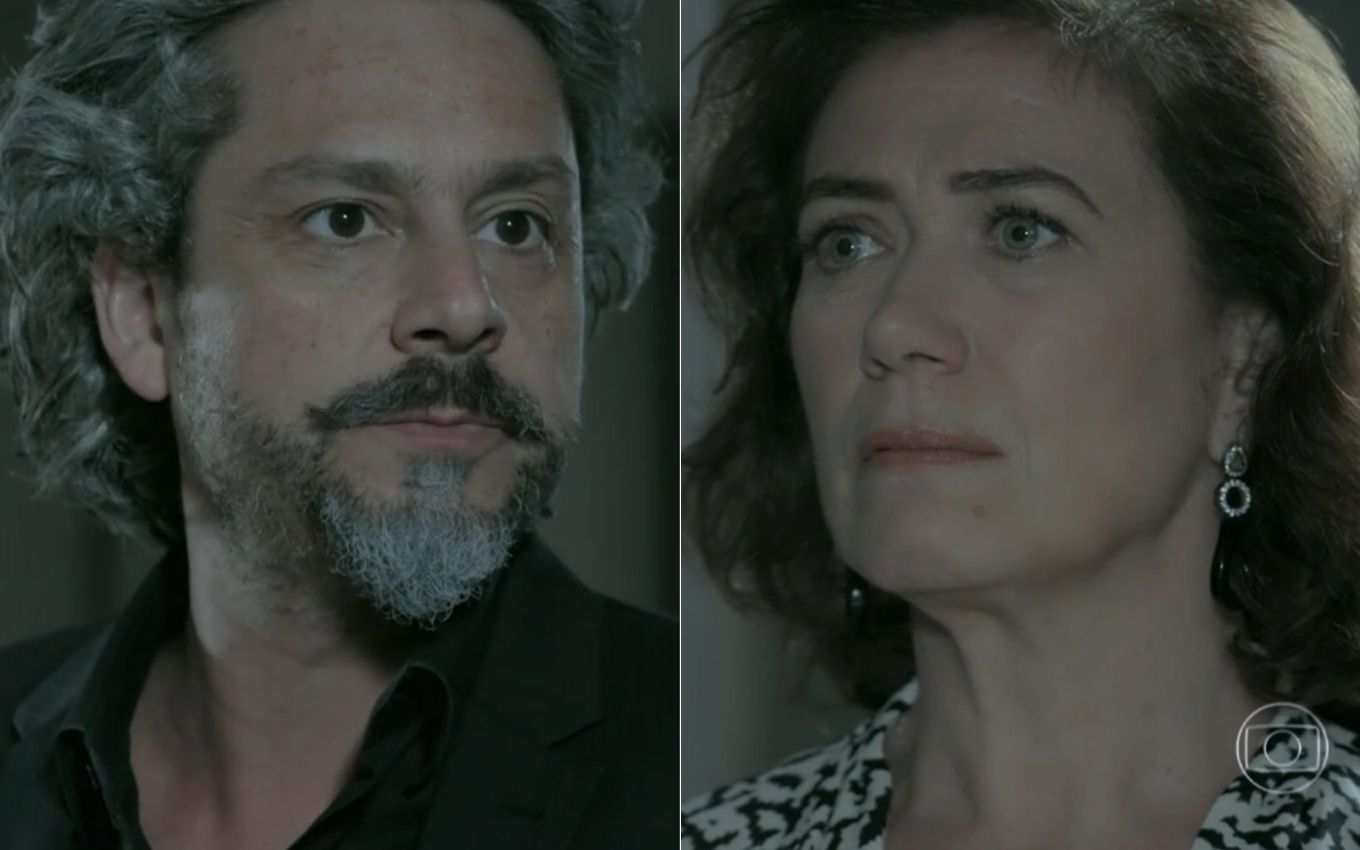 Second, 10/11 (Chapter 157)
José Alfredo tells Cristina that he believes Silviano is Fabrício Melgaço. José Pedro believes he has obtained the support of Maria Clara to intercede for him and Merival with José Alfredo. Maria Marta is surprised by Silviano’s absence. Maria Clara reveals to José Pedro that Maria Marta confirmed that she was married to the butler. Maria Clara warns her father about the union between Merival and José Pedro.

Téo confesses his love for Claudio to Erika. José Alfredo tells Maria Marta that Silviano could be her enemy. Xenia weapons against Juliane. Elivaldo argues with Tuane. Zezé listens when Du and João Lucas talk about Silviano. Teo visits Claudio. Xana decides to invite Antônio to live with him and Naná. Cora shows Cristina out of control when talking about José Alfredo. José Alfredo expels Silviano from the mansion.

Amanda presents Juliane with new sandals and Antoninho allows the samba dancer to wear them in the parade. Xenia is irritated by the failure of her plan. Cora overhears the conversation between Maurílio and Marcão and tries to alert José Alfredo that he is at risk of death, but the commander pays no attention. Manoel and Kelly approach. Enrico and Beatriz inform Claudio that he will be released from the hospital. Elivaldo, Tuane and Cristina find Cora’s absence strange.

Wednesday, 10/13 (Chapter 159)
Everyone waits for Xana to get ready to go to the sambódromo. Xenia sends Pietro to follow Juliane’s van. Silviano cries in his house. Daniele tries to intimidate José Pedro and then finds Maurílio’s costume. Magnolia and Severo are surprised by the box in the sambódromo. Claudio returns home with his family.

Carmen hears Helena talking to Salvador about an exhibition. The parade of Unidos de Santa Teresa begins. Cristina and Elivaldo try to calm Cora down. José Alfredo shows concern for Cora. Maurílio gets irritated because of the outcome of his plan. Cora tries to talk to Cristina and Elivaldo. The counting of the samba schools’ grades begins and those involved are anxious.

Thursday, 10/14 (Chapter 160)
Ishmael and Lorraine talk about Silviano. José Alfredo suspects that the person who tried to kill him was Fabrício Melgaço. Danielle questions Maurílio about what he did at the carnival and he gets angry. Enrico helps Claudio. Noely insinuates herself to Robertão. Lorraine calls Erika.

José Alfredo asks Maria Marta for a favor. Carmen calls Jonas. Maria Marta talks to Maria Clara and João Lucas about José Pedro. Vicente goes to the hospital to find out about Cora. Lorraine goes to Silviano’s house. Cora mumbles a few words in the hospital.

Friday, 10/15 (Chapter 161)
Vicente consoles Cristina. Antoninho and his friends celebrate the result of the poll. Silviano assumes for Lorraine his love for Maria Marta. José Alfredo distrusts Silviano. Danielle questions Maurílio about the attack on the commander. Enrico goes to Leonardo’s house and apologizes to him. Claudio gets emotional when he talks about Enrico to Beatriz. Maria Clara surprises Vicente, who doesn’t like it.

José Alfredo consoles Elivaldo when he visits Cora at the hospital. Felipe follows Enrico. Maria Marta calls José Pedro and he pretends he doesn’t feel well. Helena takes Salvador to visit the art gallery where she will have her exhibition. Ishmael calls Lorraine’s attention for having gone to Silviano’s house. Salvador asks Helena to marry him. José Alfredo calls Maria Isis to sleep at his house. José Alfredo demands a DNA test of his children with Maria Marta.