Volvo’s electric future comes from a commitment to sustainability

The XC40 Recharge model will be Volvo’s first 100% electric car to be sold in Brazil. (Volvo / Disclosure)

After a huge glacier took off, before a car was launched from a height of 30 meters (to test the safety of passengers), the presenter looks at the camera in fright. This is Volvo’s advertisement about the priority of the automaker’s agenda: the ESG (acronym in English for the concern of companies in the environmental, social and governance areas). Thus the new plans of the automaker for the next ten years were presented: by 2030 all Volvo cars will be electric. In an exclusive interview with Casual, Luis Rezende, Volvo’s Head in Latin America, tells about the plans and news of the Swedish brand.

Want to increase your income to buy a luxury car? Better investing your money may be the solution.

With the announcement by Volvo on Tuesday (2) that by 2030 the entire fleet of the brand will be electric, the latest sales of the brand’s combustion cars are scheduled for this month. From then on, only the Plug-in Hybrid and fully electric versions will be sold.

For this year, two 100% electric launches are expected, the XC40 Recharge, which arrives in the country in mid-July, and the C40, launched this week and which arrives in Brazil in January 2022 (for the time being the model is only available in Milan, Tokyo and New York). Both cars still have no figures released for Brazil.

For this year, the Swedish brand expects to reach a thousand recharge points. “Brazil is a country with a continental proportion, so we will have many actions in relation to investment in charging infrastructure”, comments Rezende on shopping center chains like Iguatemi and BR Malls and Pão de Açúcar supermarket chain, which offer recharged places of vehicles free of charge. “I believe that this is the role of the industry, and not of the government, which has more important actions to be concerned about, such as combating poverty, accelerated even further with the pandemic”, he adds.

Even though electric cars have autonomy of up to 420 kilometers, Volvo intends to take the stations to other cities. “It is a necessity for the client who leaves São Paulo and goes to the beach or the countryside”, comments Rezende on the implementation of stations outside large cities. 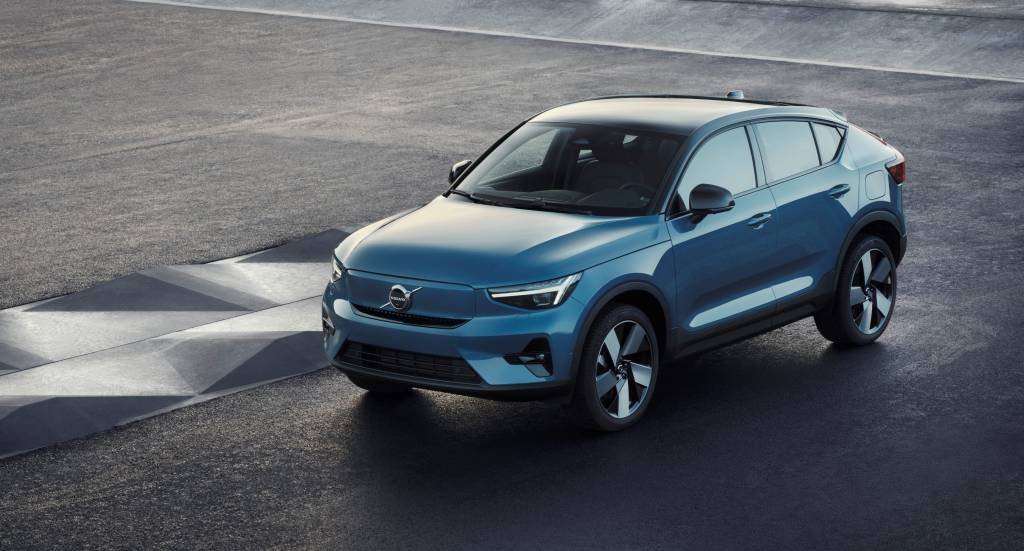 The C40 model, launched this week, should arrive in the country in January 2022.

The C40 model, launched this week, should arrive in the country in January 2022. (Volvo / Press Release)

Another point that is consistent with recharging concerns the habits of drivers. “Recharging the vehicle is another area that should change with the consumer, and is closer to what we already do with the notebook and cell phone: to always keep an eye on the battery level,” he says.

Another action of commitment to sustainability occurs with the replacement of the use of animal leather in cars with synthetic materials.

Volvo reached more than 63% among all plug-in electrified products sold in Brazil and more than 50% among hybrid and electric vehicles in the premium segment, behind BMW and with a margin of 750 vehicles ahead of third place, Audi.

“It was an atypical year as we all know. Our highest priority was to find ways to protect our employees, dealers and consumers, in addition to planning the resumption in the strongest possible way. In this sense, we have many reasons to celebrate ”, highlights João Oliveira, general director of operations and innovation at Volvo Car Brasil.

Although in Brazil Volvo closed the year with a positive balance, globally, sales of the automaker plunged by 22% compared to 2019, with a total of 40 billion dollars. But still, Volvo has endured a dramatic 2020 for the automobile industry, with an overall sales drop of 6% to 661,713 vehicles.

The company also wants to revolutionize its sales channels, which will sell electric models online. “People may be irritated by the lack of price transparency. The purchase process remains very complicated, so we are going to simplify the menu, with fixed prices in each country,” said Håkan Samuelsson. But, this does not mean the end of the dealerships. “Physical stores provide capillarity in Brazil. It is not possible to be attentive to the public without this important partner. In addition, there is all the maintenance of the vehicle and an after sales service that is also extremely necessary with the dealerships ”, comments Rezende on the digitalized transactions.

For the coming years, the Head of Latin America assesses the importance of the measures taken by the company. “Our ambition is to launch a healthy competition. The more electric cars are circulating, the more this technology is embraced, the less pollutants will be launched in cities. The entire population benefits from this, in addition to making technology cheaper and expanding access. So, for me it is a race of good ”, he concludes.

Clicking on one of the numbers above and finalizing your evaluation will help us to improve even more.

Dressed in a fern, Pocah complains about hair in the BBB21 vase and becomes a joke