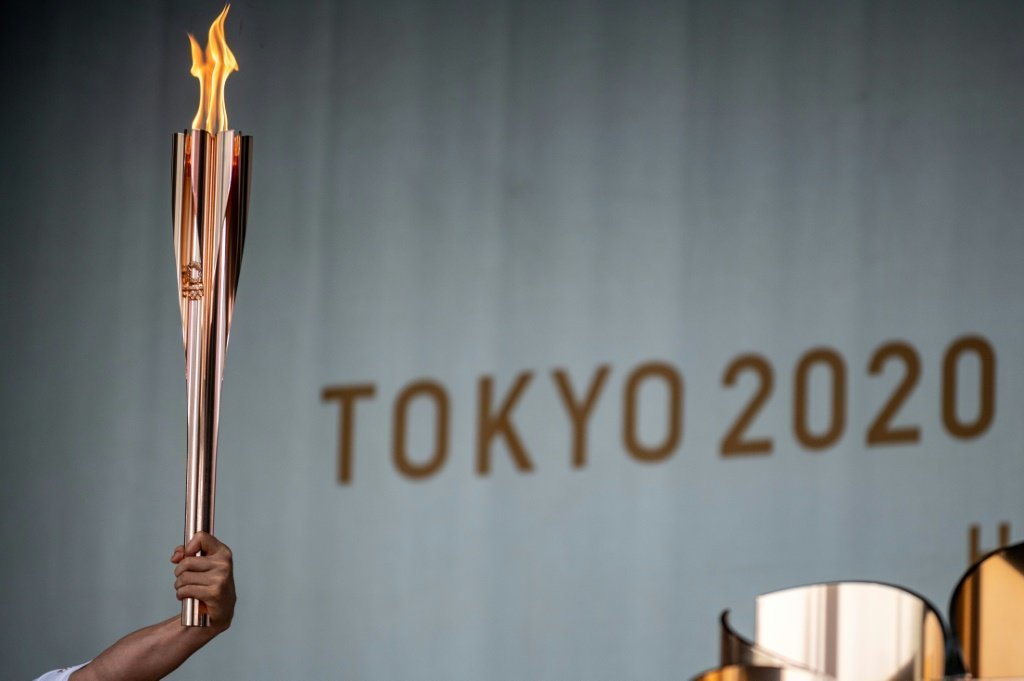 The Olympic torch on the first day of the relay, in the city of Machida. (Jérôme Rasetti/AFP)

After staggering to near extinction due to the coronavirus pandemic, the Olympic torch will finally shine in Tokyo and in their stadiums a year late, starting July 23, for two weeks of sports competitions under the threat of covid-19.

It is perhaps the most important and expected daily count of the Tokyo Olympic Games (23 July-8 August), the first worldwide event organized since the beginning of the pandemic.

More than the medal table, the whole world – especially Japan, whose population has been hostile to these ‘Pandemic Games’ from the start – will probe the daily numbers of covid-19 cases among athletes, volunteers and other participants of the Olympics.

As of July 1, the Tokyo-2020 organizing committee has registered 55 positive cases, including the first two athletes residing in the Olympic Village on Sunday.

To reassure public opinion, which mostly preferred a further postponement or cancellation of the Games, the Japanese authorities took drastic measures: daily tests for athletes, mandatory use of masks for all, meetings limited to a minimum in the Olympic Village, prohibition to the relatives of foreign athletes to go to Japan and, finally, never seen before in the history of the Olympics: almost total absence of public.

The Tokyo Games, postponed for a year on March 20, 2020 – another unprecedented move in Olympic history – will be held without spectators.

However, the city of 14 million inhabitants is subject to a state of sanitary emergency throughout the period of the Olympic Games, which forces bars and restaurants to close at 8 pm.

We are far from the exuberant enthusiasm aroused by the designation of the Japanese capital as the host city for the XXXII Games of Modern History, on September 8, 2013. On that day, television presenters wept as they announced the news, as the country celebrated.

Japan was recovering from the triple catastrophe of March 11, 2011 (earthquake, tsunami, Fukushima nuclear accident), which left around 18,500 dead. The Olympics were immediately dubbed the ‘Reconstruction Games’.

Sculpture with the Olympic hoops.

But that was before covid, which would profoundly change the planet and cause about 15,000 deaths in Japan.

The pandemic was not the only cause of headaches and questions for organizers, who faced several scandals, such as the one that led the chairman of the organizing committee, Yoshiro Mori, to resign in February over sexist statements.

In the sports world, these Olympics are already historic. For the first time, there will be as many women as men taking part in the tournament’s 339 events, in the name of gender equality demanded by Thomas Bach, who also pushed for the inclusion of “young and urban” sports such as skateboarding, surfing, basketball 3×3 and climbing.

Among the 11,090 athletes registered in Tokyo, there is not a sporting icon with a planetary dimension. Usain Bolt retired from athletics, NBA superstar LeBron James declined to participate and football stars such as Neymar, Lionel Messi and Kylian Mpabbé were not released by their clubs.

However, the undisputed leader of world tennis, Novak Djokovic, will be present and could add the Olympic title to this year’s titles at the Australian Open, Roland Garros and Wimbledon, coming closer to the ‘Golden Slam’: formed by all the great titles in an Olympic year, an achievement achieved only by the German Steffi Graf in 1988.

Other great players in current world tennis, injured (Roger Federer) or by personal decision (Rafael Nadal, Serena Williams), will not be at the Tokyo event.

Another of the heroes of these Olympic Games could be a French giant. In the country of judo, in the ‘temple’ of the Nippon Budokan, Teddy Riner could become on July 30, at the age of 32, the first three-time Olympic champion in the history of the category.

Unless American swimmers Caeleb Dressel and Katie Ledecky, with an overloaded program, get an impressive collection of titles and/or medals, or their compatriot Simone Biles becomes the best gymnast in history, surpassing the nine Olympic crowns of the Soviet Larissa Latynine.

The traditional culminating moment of all the Olympics, the men’s 100 meters final, scheduled for August 1st, presents itself unusually indecisive.

Meanwhile, the Olympics will kick off on Wednesday, 48 hours before the opening ceremony, with a softball match between Japan and Australia and more than 2,870 days after Tokyo was tasked with organizing a Games that are definitely out of the standards.