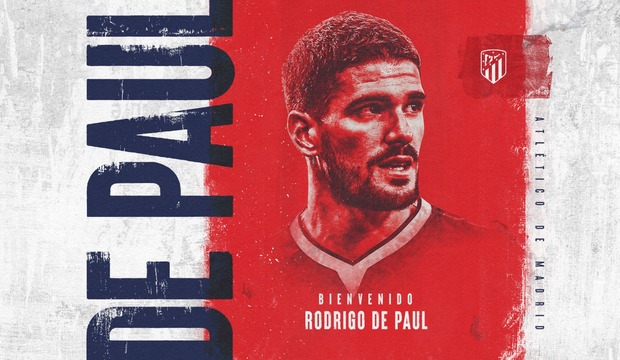 Midfielder was at Udinese, Italy, and signs a five-year contract with the current champion of La Liga

Reproduction/ Atlético de MadridDe Paul, 27, is another Argentine in the Spanish Championship

Two days after shining in the final of America Cup with the Argentine national team, the midfielder Rodrigo De Paul was announced this Monday, 12, as the new reinforcement of the Atlético de Madrid. The athlete was in the Udinese and signed a five-season contract with the current Spanish champions. On Atlético’s website, De Paul is described as “a powerful midfielder, with great ease to join the attack and both score goals and provoke them to his teammates”. In the Copa América decision, for example, he was the one to launch Di María to score the hermanos’ title goal. At the age of 27, De Paul began his career in the youth category of Racing, where he rose to professional in 2013 at just 19 years old. The following year, he was hired by Valencia, but he was unable to establish himself and returned to the Argentine team.

In 2016, he moved to Udinese and was one of the team’s sensations. In five years there were 184 matches, 34 goals and 36 assists. “I’m very happy, I’m going to the champion of La Liga and I know the responsibility that entails. It’s a big step in my football career. Also when it came, after winning the Copa America. This gives me more strength to meet all expectations. I am passionate about football, and also for the time I spent in Spanish football, I know Atlético very well, without counting all the friends and companions I have and who play in Spain”, declared De Paul in a statement. Atlético debuts in Spanish Championship on August 15, against Celta de Vigo, away from home. The team will also dispute the Champions League.