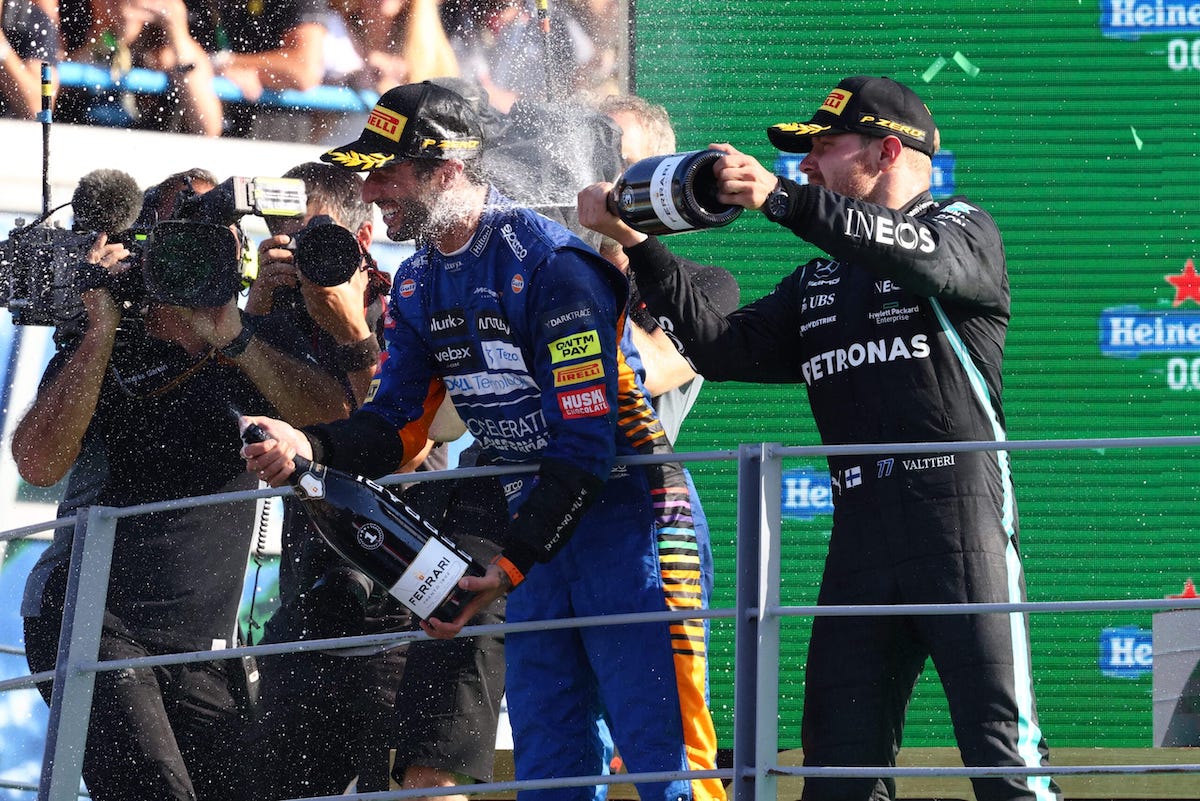 Ricciardo and Norris’ result (P1 and P2) is the best for Mclaren since 2010. The accident of Max Verstappen and Lewis Hamilton, the great candidates for the drivers’ world title, was one of the issues of the day and resulted in a three-place penalty for the Dutch driver at the next Russian Grand Prix.

It was one of the themes of the 2021 season in Formula 1: Daniel Ricciardo, an Australian pilot who signed last year for the Mclaren and winner of seven grand prizes throughout his career, he was in poor shape, with his results falling far short of expectations and that of his own teammate, Lando Norris, only in his third season as a driver in the main category of motorsport and, for several weeks, third in the drivers’ championship.

The Australian, the driver, became a recurrent image in interviews after the races. most smiling on the grill, crestfallen facing the journalists and trying to find a justification for the bad results. Many even speculated that Ricciardo’s peak form it would have passed already and to move forward with the possibility of the “multi-annual” contract not be fulfilled.

At the end of the Hungarian GP, ​​after missing the points in a race that ended with just 13 cars on the track, Ricciardo sat on the front right tire of his car, with a introspective and dejected posture, which may have been a parting moment before the summer break — much longed for himself, as he has publicly revealed.

On his return, in Spa, the aussie revealed that the holiday had served its intended purpose: rest, try to forget about the less successful races, and try to understand some of the features of the MCL35M that still eluded him. apparently it was Successful. In qualifying for the Belgian Grand Prix he was fourth, just behind Max Verstappen, George Russel e Lewis Hamilton — Lando Norris, who was preparing for a qualifying on the front row of the grid, had a serious accident in Q3 and would eventually leave 15th. A trait of the genius of Ricciardo who once shone in the RedBull?

In Zandvoort, at the Netherlands Grand Prix, on one of the circuits less favorable to the Woking team, Mclaren registered the second worst result of the time (just behind the Hungarian GP), scoring only with Lando Norris and losing third place in the World Cup to the Ferrari.

The expectations of the papaya team, since the beginning of the season, for a historic result pointed to Monza, the temple of speed, where the papaya single-seater, with its straight speed, could be superior to, for example, the RedBulls and be, from the start, the second fastest car on the track — right behind the Mercedes.

On Saturday after qualifying sprint — a new format that Formula 1 introduced this year at Silverstone — Ricciardo, who finished third, behind Valtteri Bottas (Mercedes) and Max Verstappen, said to have felt “pure anger” behind the wheel of his car, a “positive” anger that left him thirsty for more — after all, the Australian would start from second place, compared to penalty de Bottas (because the team changed parts of its power unit before qualifying). In the air was the idea that a attack to dutch before the first curve it would be a possible and very realistic scenario.

No sooner said than done. The same Daniel Ricciardo who arrived in Monza with “special sensations“, with a phenomenal start, he even managed to surpass Verstappen, taking command of the Grand Prix on the first lap. Behind him, the first place finisher struggled to get closer — on the radio he complained about the dirty air coming out of the MCL35M — a difficulty shared by Lewis Hamilton, who was chasing Lando Norris, riding in the third place.

Despite successive attempts to attack, none of the title candidates managed to consummate an overtaking and everything indicated that the first places would be decided in the pit stops — Hamilton was the only one of the three on hard tyres, with Pirelli’s indication that the middleweights would have to be discarded around lap 15 onwards. Ricciardo was the first to stop, followed by Verstappen in an unusually slow stop for RedBull (11 seconds) that at the start would compromise their chances of reaching the lead of the race.

However, it wasn’t this mishap that deprived the Dutch driver of his chances of reaching the highest place on the podium. Verstappen and Lewis Hamilton, who would stop at lap 25 to get rid of the hard tyres, were involved in a fierce dispute for position shortly after the Brit stepped off the pitlane line, which ended in a shock at the first chicane, after the Dutchman’s single seater is designed after stepping on a broker. The RB16B would eventually land on top of Hamilton’s W12, with the halo to play a leading role for the British get out of the accident unharmed.

After the yellow flag situation, which resulted in Charles Leclerc momentarily taking first place in the race (before going to the pits), the men from Mclaren occupied both first places not to let them go again — Norris would overtake Leclerc in the relaunch of the race. The possibility of Woking’s team making the 1-2 was only threatened, albeit remotely, by Sérgio Pérez and Valtteri Bottas.

The first would suffer a 5-second penalty for overtaking Ferrari’s car 16 off track and not having immediately returned the position – a sanction that was only applied to the final time – and the second failed, on track, to overtake the Mexican, ending up winning the third place in the secretariat. Still, a positive note for the Finn who, starting from 19th position and taking advantage of the new engine mounted in his car, managed to overtake almost the entire field and reach the podium.

Further back, the Ferraris from Carlos Sainz and Charles Leclerc never actually managed to approach the top places, in a weekend that Maranello’s men envisioned as the hardest of the season — despite having the tiffosi on the benches. The passage through Italy was, moreover, marked for the team of the cavallino rampante by the serious accident that Sainz suffered in the second free practice and for the indisposition of Lecrerc also in the second practice, which made him fear the worst for the sprint qualifying.

Those who don’t leave Monza with the best memories, unlike what happened last year, are the men from Alpha Tauri, that after the accident of Pierre Gasly in sprint qualifying they had to abort their participation in the Grand Prix due to mechanical problems that hit the Frenchman’s single-seater in the installation laps, with Gasly still starting, and that of Yuki Tsunoda when it was already on the starting grid, having been removed before the official start.

Positive note for Lance Stroll, who gets the best personal result of the season, for the Alpine, which manages to place the two cars in scoring places and to George Russel, who this week signed for Mercedes and who scores for Williams for the third time in four consecutive races — after two and a half years of failing to do so.

How are the ratings?

When Lewis Hamilton and Max Verstappen collided on lap 26 at the first chicane, the only certainty that resulted was that the first two places in the drivers’ championship would not suffer changes, with the Dutch rider retaining the lead he secured at home last weekend. In fact, Verstappen is, between the two, the winner of the passage through Italy, as on Saturday he won the two points resulting from winning the qualifying sprint, against Hamilton’s zeros.

Valtteri Bottas sediments its third place in the drivers’ championship, who also won in Zandvoort, while Lando Norris distances himself from Pérez in the fight for fourth place.

With regard to the world of constructors, the Mercedes continues to lead, largely due to the good results he has achieved in recent races with the two cars — at a stage of the season when RedBull has scored almost exclusively with Verstappen against the bad time that Sérgio Pérez is living.

Mclaren with a history of first and second place results — it didn’t happen anymore from 2010 — gained an advantage against Ferrari, who came from a good result in the Netherlands, and is now in the third place, in the position of “best of the rest”. With the good performance of the two riders, Alpine also surpasses Alpha Tauri in its weekend to forget.

After the race was over and after hearing those involved and analyzing the images, the stewards assigned Verstappen a penalty of three places on the grid which will be fulfilled in the next race.

After a triple round that marked the return of Formula 1 after the summer break (having passed through Belgium, the Netherlands and Italy), the fastest single-seaters in the world will stop for 15 days and return on 24 September for the Russian Grand Prix, in Sochi.