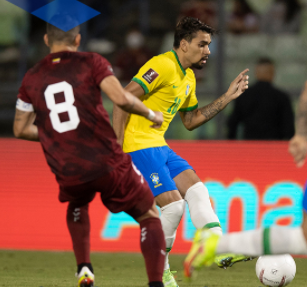 Eric Ramírez opened the scoring at 10 of the first half; in the second stage, Marquinhos, Gabriel and Antony gave the victory to the Brazilian team

A Brazilian Team took the field this Thursday, 7th, for the 11th round of South American Qualifiers for the 2022 World Cup and despite not showing good football, he won the Venezuela 3-1. The goal was scored early in the match. At 10 minutes, Soteldo crossed in the area and Eric Ramírez took advantage of the slip of Fernandinho and Marquinhos to head-to-goal. Without much competitiveness, Brazil woke up after the move and even sent a ball to the crossbar. In the second half, on minute 11, Thiago Silva scored, but the little flag was offside and canceled the move. The pressure continued and at 25, Marks took advantage of a corner kick and went up to head and tie the game. Venezuela lost attack power and Brazil started to scare more.

At 36, the referee scored a penalty when Gabigol was shot down in the area. The Flamengo player went to charge and converted, turning the score around. In stoppage time, Antony made the third and closed the game 3-1. With 27 points, the team remains at the top of the table and Venezuela remains at the bottom, with just five points in ten games. In the next round, on Sunday, he will face the Colombia and on Thursday, the 14th, the triple round against the Uruguay.