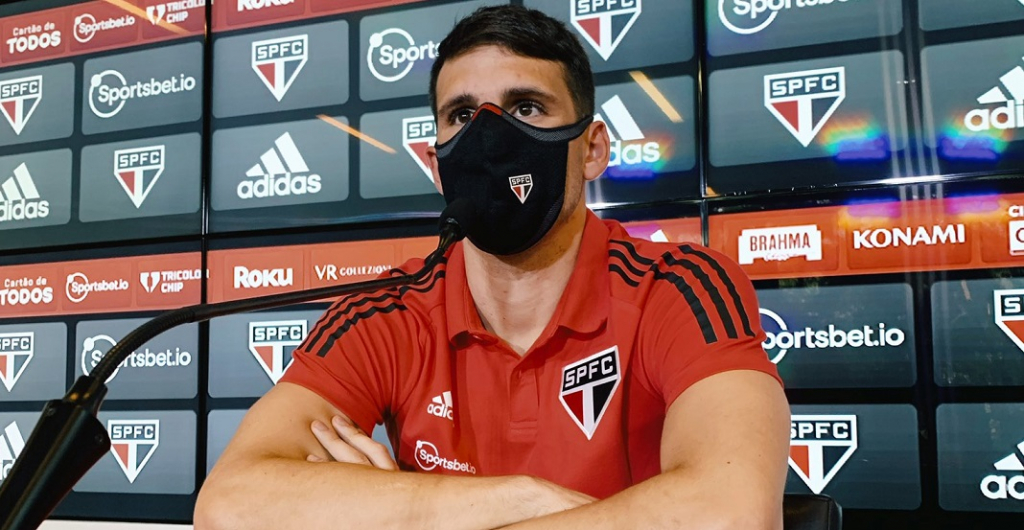 Back at the club after five years, the striker received the 30 shirt from president Júlio Casares and admitted that he was not 100% physically

Jonathan Calleri was presented as a new reinforcement of the São Paulo on the afternoon of Wednesday, 8, at the CT of Barra Funda. Back at the club after five years, the striker received the president’s 30 shirt Júlio Casares. Living with the expectation of making his debut for Tricolor, the Argentine admitted that he is not 100% physically and did not reveal whether he will be on the field in the match against the Fluminense, scheduled for Sunday, 12, at Maracanã, by the Brazilian championship. “I always want to play, but I have to be aware that it’s been four months since I’ve trained for a professional team, that I’m not on a daily basis with the cast. I will debut when I am physically fit. These days I trained with part of the group, I’ll do a week of constant training, and I’ll keep working to help the team when Crespo needs it”, he said.

Calleri, this time, returns to São Paulo with serious financial problems. In addition to accumulating R$ 600 million in debt, Tricolor owes some athletes in the squad, such as right-back Daniel Alves. The center forward, however, stated that he is not afraid to go without receiving. “No laughs). Money today is secondary, I come here to play and be happy. That’s what I most want, to play again and feel like an important player. This contract does not depend on me, you have to ask the directors, and let them pay me when they have to. It’s a signed contract, quite acceptable, and I’m going to play to show everyone that I can once again be the player I once was”, he commented.

After leaving São Paulo, Calleri had discreet spells for some clubs in Europe, such as West Ham, from England, as well as Las Palmas, Alavés, Espanyol and Osasuna, from Spain. Now, he hopes to contribute his experience. “I want to thank the directors and fans, who during these five years that have passed, always sent messages of affection. They never forgot me, and I want to thank them for supporting me all these years. I am a person who never settles for what he does. When I was here in 2016 I had a high goal average, but I believe I could have done more. Today I’m another type of player, before I didn’t think so much about what I do, but now I have more experience. I didn’t play for any big team, the last one was São Paulo. It’s not the same to play for a small club in England or Spain as it is here, for a team that sets out to attack. I’m happy to be back, I believe it was the moment”, he analyzed.