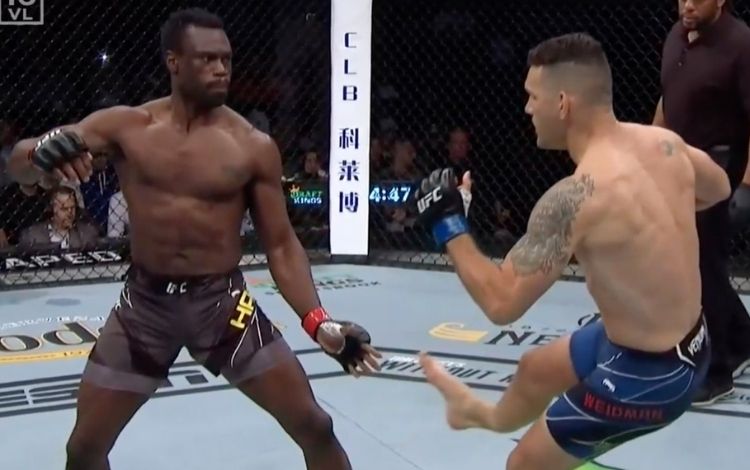 Reproduction / UFC / 25.04.2021In the UFC, Chris Weidman fractured his leg while fighting with Uriah Hall

The fighter Chris Weidman suffered an injury that shocked those who followed the UFC 261, which took place in Jacksonville, Florida, United States. The scene in which the athlete breaks his leg is similar to the fracture suffered by the Brazilian Anderson Silva, in 2013, in a fight against Chris himself. This Saturday, the 24th, he ended up living the other side of the coin and, when attempting a low kick, fractured his right leg and saw the Jamaican win the fight by technical knockout in the 17 seconds of the first round. At the start of the fight, Weidman applied a right leg kick, very similar to what Spider tried before him eight years ago, but Hall steadied the leg and the American’s shin found just his opponent’s knee. He did not notice and even tried to support his weight on the broken leg, bending his foot backwards, but he fell in pain and the fight was over.

The shocking and distressing scene impressed the approximately 15 thousand people who filled the arena Jacksonville, marking the return of the public to the UFC, who went to the gym for the first time since the beginning of the Covid-19. The official result was a technical knockout for the Jamaican. Weidman left the octagon on a stretcher and in great pain. Uriah Hall, Anderson Silva’s last opponent in the UFC, seemed to disbelieve the scene he had just witnessed and remained static. The match in which Spider fractured his leg was the rematch against Chris Weidman. They clashed on December 28, 2013. The fractured left leg at 1min16s of the first round killed the Brazilian’s dream of regaining the belt he had lost to the American five months earlier, at UFC 162, when he was defeated by knockout.

With the feeling of those who know Weidman’s pain, Anderson sympathized with the American through a message on social networks. The former UFC champion wished a good recovery to the former executioner, known for being the first opponent to beat the Brazilian in Ultimate. “My deepest and most sincere feelings, champion. Have faith, I wish you a great recovery. At that moment, I wish you and your whole family a lot of light, a lot of love and wisdom. To sports fans, respect this moment of this incredible warrior. Let’s hope it will be 100% soon. God bless you and your family, Cris ”, wrote Spider.

In the main event at UFC 261, the Nigerian Kamaru Usman defeated the American Jorge Masvidal by knockout by fitting a spectacular right hand to his rival’s chin at 1min02s of the second round and kept the welterweight belt for the fourth time. Jessica “Bate-Estaca” was no match for Valentina Shevchenko, who continues to reign in flyweight (up to 57kg). The Kyrgyz fighter was unaware of the Brazilian, dominated the whole confrontation and won by knockout at 3:19 min of the second round to ensure the fifth successful belt defense in the category.

* With information from Agência Estadão.