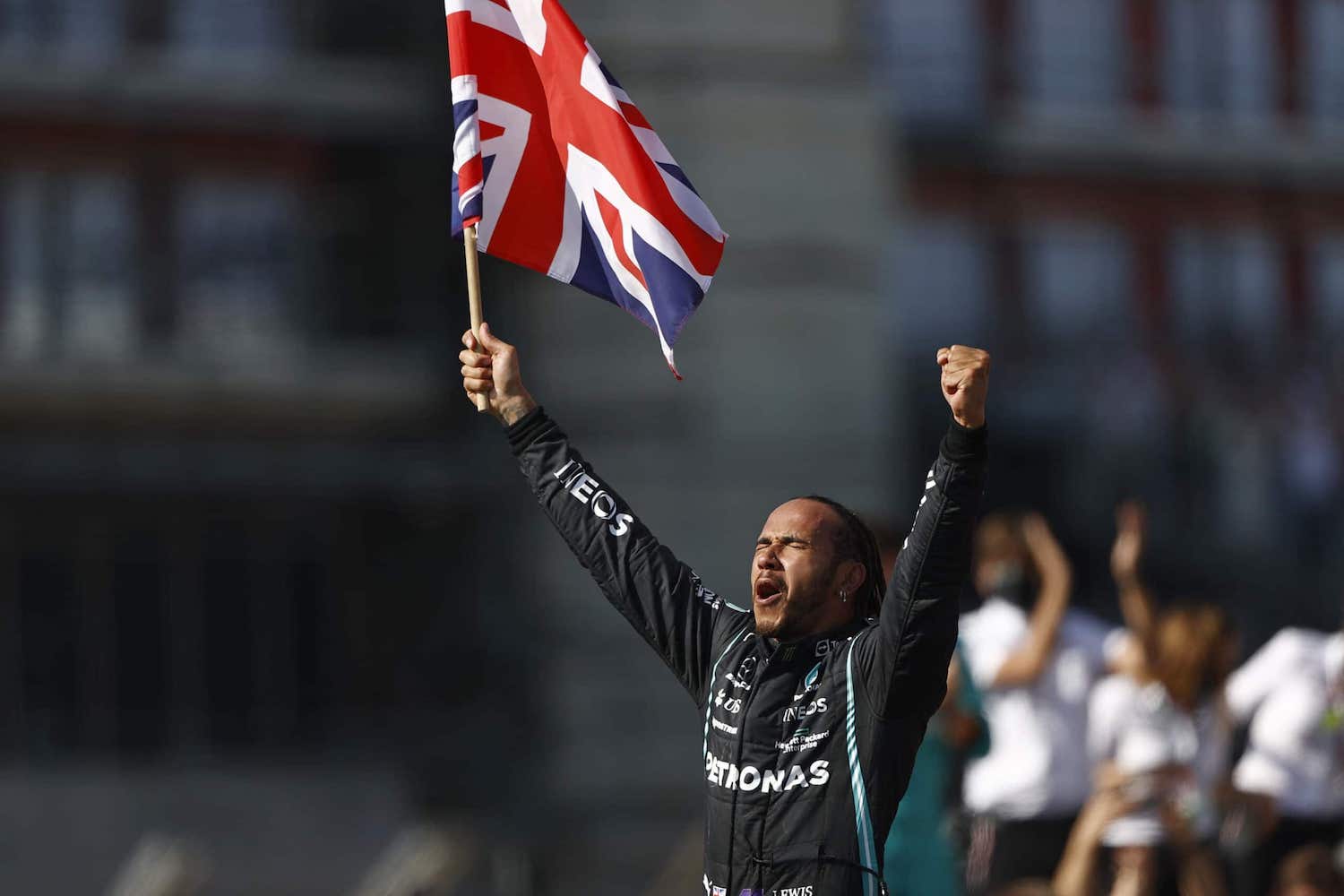 Accident between Hamilton and Verstappen ended with the Dutch driver being projected with great violence against the barriers. After the race, a wave of insults, some of a racist nature, swept the social networks against the seven-time world champion, prompting a joint reaction from his team, Formula 1 and the International Automobile Federation.

It was a historic and exciting weekend at Silverstone for the Formula 1 Grand Prix of Great Britain. Sunday’s race was marked by the incident entrance Max Verstappen, current leader of the drivers’ championship, and Lewis Hamilton, current champion in title.

The fight between the two has been stiff and stuck in almost every race this year’s World Cup — the first in many years in which Mercedes’ dominance is challenged by Red Bull — so many anticipated a possible clash between the two sooner or later.

The collision took place on the first lap of the race, just off the Copse corner, when Lewis Hamilton, in attack, enters Max Verstappen’s line of travel, the front wing of the Briton’s monologue hitting the Dutchman’s right rear tire, which would eventually for being designed with great violence against barriers — a collision that took place at 290 km/h 51 G’s (51 times the force of gravity).

The title rivals come together at Copse, pitching Verstappen into a high-speed crash.

The Dutchman was able to walk away but he has been taken to hospital for precautionary checks#BritishGP 🇬🇧 # F1 pic.twitter.com/ol1s9dRJoa

The driver would eventually get out of the car by the foot, having been observed by the medical team of the circuit.

The race would be suspended so that track marshals could remove Verstappen’s car and restore the tire barrier. Still, the interruption will also have been essential for the Mercedes managed to intervene in Hamilton’s car, which will have allowed him, said the team source after the end of the race, to finish the race.

Immediately after the accident, and before the direction of the race had ordered its suspension, Charles Leclerc, of Ferrari, took advantage of Hamilton’s damage to put himself in the test lead (having also surpassed Valtteri Bottas),

Leclerc led the race until lap 49 of 52, when Hamilton, after taking a 10-second penalty given by the stewards, finally managed to catch up — and overtake — him after a relentless, Hammer Time-style chase. British has already accustomed the Formula 1 audience.

After overtaking, Leclerc managed to hold second place, despite the successive engine failures that the Monegasque had to endure during the race.

In a proof that the leadership for both titles (drivers and constructors) is red hot, the period between the accident of Max Verstappen and Lewis Hamilton was marked by countless radio messages exchanged between teams and race management, which were always incorporated in the television broadcast of the race — a novelty introduced at this time.

On both sides there were justifications for the behavior of their pilots, while Red Bull yearned for a big punishment for Lewis Hamilton.

After the race, the exchange of words continued. Christian Horner, head of the Austrian team, began by highlighting the fact that his pilot be physically well, despite the contoured accident in which this happened.

“Hamilton was never, at any time, alongside Verstappen. It was a serious accident and that curve was 100% Max. In my opinion, Hamilton is to blame, who should never have stayed in that position”, he declared. Horner concluded his press statements with a provocateur “I hope Lewis is satisfied with himself”.

Already Toto Wolff, Mercedes team leader, started by saying that “it takes two to tango”. “Those two won’t give an inch. We have seen it throughout history’s great rivalries. The most important thing is that Max is fine”.

At the time of these statements, Red Bull had already revealed on its social networks that the Netherlands pilot had been transferred to a hospital unit near Silverstone for further medical examinations.

Hours later, when he was discharged, Max turned to social media to express himself, for the first time, about the accident. “Very disappointed to have been pulled out of the race like that. The penalty given does not help us or do justice to the dangerous maneuver that Lewis made on the track. Watching the celebrations while I was still in the hospital was a disrespectful and unsportsmanlike behavior.”

Prior to the Red Bull driver’s comments, Lewis Hamilton stated at the traditional post-race press conference that had no intentions of apologizing to Max because he understood that he had no reason to. “I haven’t seen the broadcast yet, I saw an excerpt when we got back to the garage, but I’ll go back and think about it.”

The Brit argued that the collision should be treated as “racing incident”, which, in his opinion, can rarely be attributed in full to a pilot. Even so, the seven-time world champion promises to strive to restore the “respect” in the fight he is having with Verstappen.

While the cars were still rolling down Silverstone’s winding track, social media was already filled with comments from debating fans. who was the real culprit by the collision of Hamilton and Verstappen, a discussion that was only overcome when race stewards announced the 10-second penalty for the British driver — unfair, some say, insufficient, most say.

The comments and yours aggressiveness level were rising, largely due to the words chosen by the members of the Red Bull team during and after the race, but also due to the reaction of Max Vertsappen.

A few minutes after his comments, published on official Twitter and Instagram accounts, Lewis Hamilton’s social networks were target of insulting comments of racist nature, which motivated, as early as this Monday morning, an official and joint reaction from the International Automobile Federation (FIA), a Formula 1 and the team Mercedes-AMG in which the three entities lament and condemn what happened “in the most vehement way possible”.

“These people have no place in our sport and we appeal to those responsible for these acts to be held responsible. Formula 1, the FIA, the drivers and teams are working to build a more diverse and inclusive sport, which is why such strong expressions of online abuse must be highlights and deleted”, can be read in the statement.

the own Red Bull it has also already issued a statement in which it clarifies that despite the “great rivalry” that exists on the track, the teams are “united” against racism, so they also “condemn” any kind of racist insults addressed to their team, opponents and fans. Finally, the team showed “angry and sad” for offensive comments addressed to Lewis Hamilton.

Moreover, it is important to remember that the Mercedes driver has been a central figure in the sport also in the fight against racism, being the main driver of the moment We Race as One, in which athletes are invited, before the start of each race, to kneel – in a gesture that has become a symbol of the fight against racism since the death of George Floyd.

From what can be observed since the beginning of the period, the pilots split in relation to the attitude to adopt. Max Verstappen is one of those who choose not to.

How are the ratings?

All in all, after a weekend with such fierce fights on and off the track, little or nothing changes in the first places of the tables. When it comes to the drivers’ championship, Max Verstappen continues to lead, despite having seen his lead reduced to eight points.

To the third place it ascends Lando Noris, from McLaren, who with fourth place continues his impressive record as the only driver to score in all races of the season and setting a new record within the Woking team as he is the first rider to score in 15 consecutive races.

Valtteri Bottas, with his third podium in the last three races, moves up to fourth and benefits from the bad weekend of Sergio Perez. The Mexican driver went off on his own in Saturday’s sprint race, so according to the rules he would have to start last on the grand prix starting grid. However, changes to his monologue would force him to leave for Sunday’s race from the pitlane.

After the red flag situation, Pérez managed to win some places, running often in scoring places, however, a somewhat confused strategy on the part of Red Bull made him stop too early (Czech was the only one to start the race with the harder compounds) and unexpectedly before the end of the race, so steal Lewis Hamilton’s fastest lap point — an unconsummated robbery as Pérez finished 16th.

With regard to the world of builders, a Mercedes also reduced the margin that separated it from Red Bull, given the frankly satisfactory result of its drivers (first and third places) against the withdrawal and 16th place of Max and Czech, respectively.

Sprint Racing: Is Format Enough to Grab the Drive to Survive Audience?

The weekend at Silverstone was historic for more reasons. After the public returned to the Red Bull Ring stands at the Austrian Grand Prix, it was the turn of British fans to witness the return home of Formula 1, with the organization appreciating the presence of 140 thousand supporters only on Sunday.

Even so, the great news of the weekend was the debut of the new format that Liberty, the F1 owner, intends to implement, with a view to a new audience, the so-called public Drive to Survive — alluding to the Netflix series.

In the new concept, the traditional classification takes place on Friday in the late afternoon and determines the starting grid for the sprint race — or a sprint qualification, in the organization’s vocabulary — which takes place on Saturday and sets the grid for the big, decisive, race on Sunday.

In the first experience, Fernando Alonso was the big winner, as he managed, at a certain point, win six places compared to the previous day’s qualifying — he finished 7th after qualifying 11th on Friday.

Overall, the reaction from riders and fans was positive, with the representatives of Formula 1 confirming that the same model will be implemented in Monza, later this year, and in two more grand prizes, despite not providing any further information about dates or circuits — at a time when the uncertainties around the calendar for the rest of the season, given the constraints caused by covid-19.

Formula 1 returns on the weekend of July 30th to August 1st, the date scheduled for the Hungarian Grand Prix, last test before the summer break.