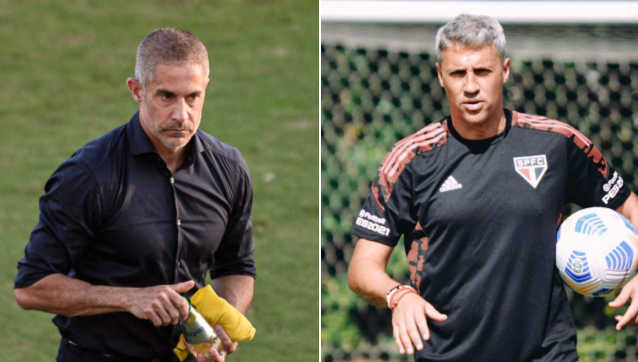 Pressured for good results, coaches from Corinthians and São Paulo have already faced each other in the Champions League at the time they played in European football

The classic between Corinthians e Sao Paulo, scheduled for 9:30 pm (GMT) this Wednesday, 30, for the eighth round of the Brazilian championship, at Neo Química Arena, will be the reunion of Sylvinho e Hernan Crespo. Today coaches, the Brazilian and the Argentine have already faced each other at the time they worked in Europe. The only time they were both on the field simultaneously, the match ended in a draw – on October 17, 2000, Lazio e Arsenal were 1 to 1, at the Olimpic of Rome, in a match valid for Group B of the 2000/2001 Champions League.

Formed in the youth categories precisely at Corinthians, Sylvinho was negotiated with Arsenal in 1999 and was already used to English football when he met with Hernán Crespo. The attacker, although he left the River Plate very early, he was taking his first steps at Lazio, who had signed the Argentine after a good spell at the Parma. In the duel held at the home of the “Gunners”, the center forward was not even in the Italian squad and could do nothing to avoid a 2-0 defeat. the score for Lazio. Crespo, in the second stage, left the bench, replacing Inzaghi. He, however, saw Arsenal up close to draw with Robert Pirès, in the 43rd minute. Despite the result, both teams advanced to the round of 16 of the competition.

More than five years later, Sylvinho and Crespo would meet again, this time wearing the colors of other teams. The Brazilian full-back, at the time in the Barcelona, saw your team dispatch the Chelsea, from the Argentine center forward, in the round of 16 of the Champions League 2005/2006. At the time, however, they didn’t actually face each other. In the first match, the Catalans surprised by beating the “Blues” by 2-1, at Stamford Bridge, in a game that Sylvinho took to the field when Crespo had already been substituted. In the 1-1 draw at Campo Nou, the winger didn’t even take the field, while the striker joined the duel 13 minutes into the second half, but contributed little to the English.

On Wednesday’s reunion, Sylvinho and Crespo fight to get their respective teams out of a crisis. The Corinthians coach, despite being recently hired, won only two of the nine matches in which he was ahead of Timão, even suffering the elimination in the Copa do Brasil. The São Paulo teacher, in turn, took the club out of the title row by conquering Paulistão, but he finds himself under pressure after starting the Brasileirão with terrible results – so far, the Tricolor has not won yet, adds only 4 points and is in the drawdown zone. In addition, the Argentine is trying to put an end to São Paulo’s fast, never having beaten the archrivals at the stadium located in Itaquera.

With few embezzlements, the Corinthians coach must choose a team with: Cássio; Fagner, João Victor, Gil and Fábio Santos; Cantillo; Gustavo Mosquito, Vitinho, Gabriel and Mateus Vital; Job Crespo, in turn, will once again not have Luciano, his top scorer, on the field. The Argentine, however, should count on Miranda’s return. Thus, the probable São Paulo is: Tiago Volpi; Diego Costa (Miranda), Bruno Alves and Léo; Daniel Alves, Luan, Liziero, Benítez, Rigoni and Reinaldo; Ed.