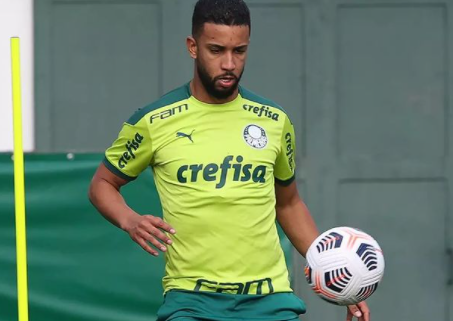 Left-back suffered a serious knee injury in December 2020 and has not been active since.

the left back Jorge is close to being available to the technician Abel Ferreira and debut by palm trees. According to the scientific coordinator of the club, Daniel Gonçalves, the player is expected to finish his rehabilitation and be able to play from next week. Gonçalves detailed Jorge’s situation. He performs the final days of physical reconditioning before returning to the lawns. The full-back suffered a serious knee injury and has not been on the field since December 2020, when he played for Basel, Switzerland. “Jorge is at the end of his rehabilitation, specifically in the reconditioning phase, and this already allows him to work with the ball with the group, with unpredictability and with a certain demand. We hope that from next week it will be fully handed over to Abel and the technical committee”, said the professional.

This Wednesday, 8, Jorge participated in a movement in reduced dimensions at the Soccer Academy with under-20 athletes in order to make game simulations. At the age of 25, the full-back was hired free of charge from Monaco and signed a contract until the end of 2025. The squad did a tactical job and carried out activities such as quick transitions, ball outs, positioning, markings and baseline plays, among others fundamentals. With two weeks without games, the squad was able to make technical, physical and even psychological adjustments. The break became an interseason for athletes to level up before returning to the field.

The next appointment is scheduled for Sunday, at 4 pm (GMT), against the Flamengo, at Allianz Parque, for the 20th round of the brazilian. Palmeiras hasn’t played since the victory over Athletico-PR, on August 28, 2-1. The team alviverde is the vice-leader of Brasileirão, with 35 points, four behind the leader Atlético-MG.