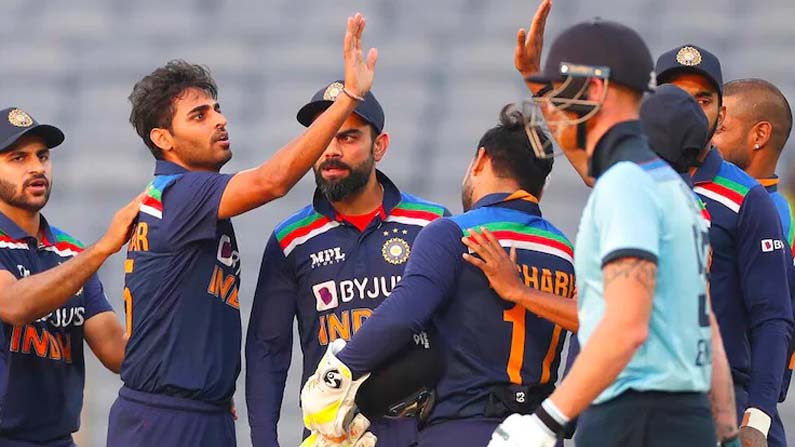 India vs England 3rd ODI Highlights: The Indian team is empowered once again. On home soil, Kohli’s side dominated England and won the ODI series. India have already won the Test and T20 series and the ODI series

India vs England 3rd ODI Highlights: The Indian team is empowered once again. On home soil, Kohli’s side dominated England and won the ODI series. India, which has already won the Test and T20 series, has also set a record by capturing the ODI series. Kohli’s side beat England by seven runs in a thrilling final on Sunday. It won the ODI series 2-1. India dusted off a clean sweep of all formats series against England. England were bowled out for 330 in the final ODI in Pune. Despite excelling after that .. she finally lost nine wickets and scored 322 runs in 50 overs. In the final over, England needed 14 runs to win. Natarajan received the ball and gave only 6 runs to give India the victory. England’s Sam Karan (95 not out off 83 balls) was the top scorer in the innings, while David Malan (50), Ben Stokes (35) and Liam Livingstone (36) were the standout performers. In the end Sam Karan’s fight was in vain. Among Indian bowlers, Shardul Thakur took 4 wickets and Bhuvneshwar Kumar took 3 wickets.

Before that the TeamIndia players played aggressively. Batting first, Team India were all out for 329 in 48.2 overs. Shikhar Dhawan (10 fours off 67/56 balls), Rishabh Pant (5 fours off 78/62 balls, 4 sixes) and Hardik Pandya (5 fours off 64/44 balls, 4 sixes) were the top scorers. Rohit Sharma (37) in the beginning and Shardul Thakur (30) in the last innings were able to put a huge score ahead of England. Among the England bowlers, Mark Wood took three wickets while Rashid took two wickets with Googly.

However, Rohit-Dhawan gave a good start to Team India. Provided a 103-run partnership for the first wicket. Established a record partnership in history. Within a short time Rohit, Dhawan and Kohli (7) led the way to the pavilion. He showed the England bowlers the dots with a game that came into the crease at a time like this. Pant and Hardick stood at the crease and scored the innings as the team struggled with 157/4. The two provided a 100-run partnership.