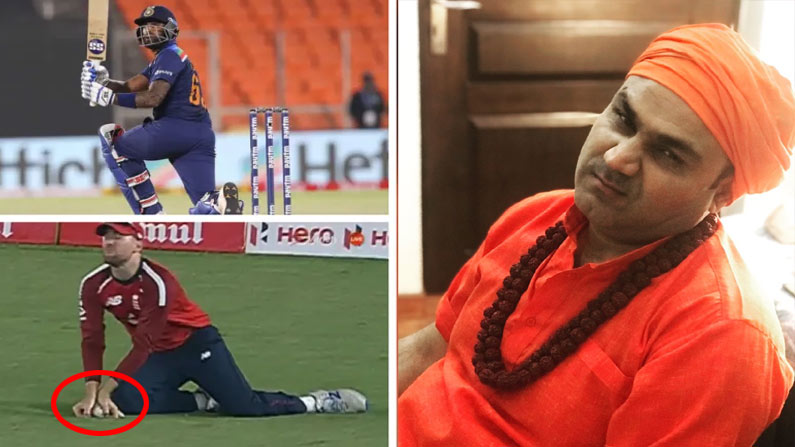 Malan Controversial Catch: The decision of the third umpire has once again become controversial. Sehwag tweeted that the umpire had blindfolded him …

India vs England 4th T20: Third umpire decision once again controversial. Kohlisena has been a huge target in the fourth T20I between England and Team India. Batting first, England set a target of 186 for 8 in the allotted 20 overs. However, England lost 8 wickets in 20 overs and managed only 177 runs. However the decisions taken by the third umpire in this match became controversial.

Suryakumar Yadav (57/31 off 6-4, 3-6), who made his debut in the same match, was caught by David Malan off Sam Curran. However the same catch became somewhat controversial. David Malan tried to catch up. It hit the ground slightly while catching the ball.

In reply it was clear that the ball had hit the ground. Surya Kumar had to fall victim to the wrong decision taken by the field umpire in the entry match itself. Already Surya Kumar is playing aggressively with a good innings.

Yadav hit the first ball of the 14th over with a sweep shot by Sam Karan and then played the ball well after hitting a legside six. But Malan received a catch in the fine leg. However the ball hit the ground as it fell into his hands. Suryakumar left the crease after replaying the catch a couple of times and watching it for a few minutes, preferring the ‘soft signal’ out given by the field umpire. Team India captain Virat Kohli was impatient to make such a decision despite hitting the ground so clearly. The outing taken by the third umpire is now shrinking the world of cricket. Netizens are vilifying the social media platform.

Sehwag set his tweet platform as satire as the umpire decided to blindfold him.

See that out here

Dinesh Karthik also responded and posted a funny tweet. Surya, Virat and Rohit posted a meme on the bullet saying that they were going to hit the third umpire together. He also said that the umpire job in cricket is very difficult and reprimand him for how India won.

Suryakumar Yadav, who was named Man of the Match in the first innings of his career, was in superb form with 57/6 fours and 3 sixes off 31 balls.

Road Safety World Series: This is a special day for Sachin Tendulkar .. Do you know how many runs he scored in his last ODI?