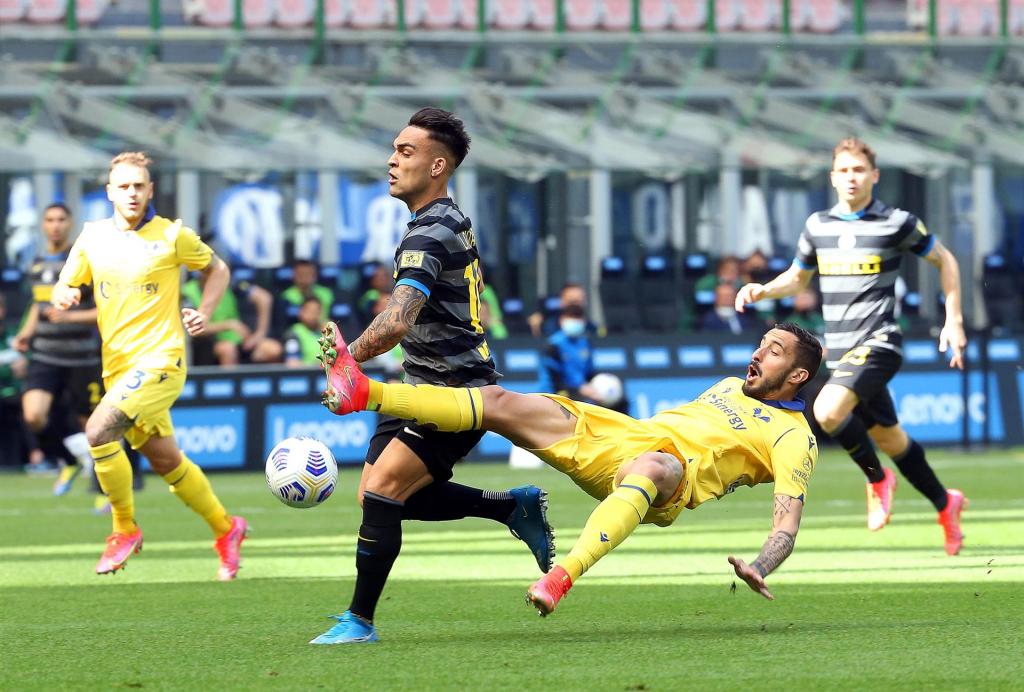 Juventus again disappointed and ended in a 1-1 draw with Fiorentina away from home; Udinese made it 4 to 2 at Benevento and moved up to 11th place

After two consecutive draws, the Inter Milan suffered but defeated the Hellas Verona by 1 to 0 this Sunday, 25, at home, at Giuseppe Meazza, in a duel of the 33rd round, and gained breath to conquer the Italian Championship in advance. The lean victory was secured by a goal from right-back Darmian in the second half. The victory leaves Internazionale with 79 points, 13 more than the archrival and vice-leader Milan, who still enters the field at the close of the round, Monday, 26, against Lazio. Soon, the team of coach Antonio Conte counts the days to return to win the national title and interrupt the hegemony of Juventus with the first scudetto in 11 years.

Inter have been unbeaten for 17 games and need only two more wins in the last five rounds to become Italian champions for the 19th time in their history without depending on any other result. Verona parked in tenth place with 41 points. Inter Milan were not brilliant, but managed to outdo their opponents and did enough to win at home. The attacking duo formed by Lautaro Martinez and Lukaku was not as efficient as they usually are, but the two gave work for the defense of Verona, especially the Argentine, who forced good saves from goalkeeper Silvestri. Moroccan right-back Hakimi also performed well and missed out on the net. He hit a shot on the crossbar and made the opposing goalkeeper reach out to defend a low shot. The goal came in the 30th minute. Darmian, who had taken over from Perisic, received from Hakimi on the left and finished from below, on the left corner of Silvestri.

It is noteworthy that Verona had a good start and scared the hosts in more than one arrival in the attack, one of them with the Brazilian midfielder Daniel Bessa, ex-Goiás. The visitors came to swing the nets, but the referee saw a foul on Handanovic and canceled the move. The goalkeeper, in fact, was not even touched by the striker of Verona, who was faster than the archer in the ball dispute over the top and sent to the goal, counting on the failure of the opponent when trying to fit the ball. The judge, however, considered that there was a fault and “saved” Inter.

The staggering Juventus again disappointed and was in the tie by 1 to 1 with Fiorentina away from home. The Florence team dominated the first stage and went ahead with a penalty goal scored by Serbian striker Vlahovic, but the Turin team managed to tie with a beautiful goal by Morata at the beginning of the second half. Criticized by the crowd, Cristiano Ronaldo again went blank and had a very discreet performance. Although the Portuguese star is not going through a good phase, he is the top scorer in the Italian league, with 25 goals, four more than Lukaku, the second in the tournament’s scorers list. The point won kept Juventus in third place with 66 points. However, fourth-placed Atalanta, with one point less, play this Sunday against Bologna, and could overtake the Turin team. With a bad campaign, Fiorentina occupies only 14th place, with 34 points. Also on Sunday, Udinese scored 4 to 2 at Benevento away from home and went up to 11th place, with 39 points, while the team coached by former Italian scorer Filippo Inzaghi is on the edge of the relegation zone, in 17th place, with 31 points, three from Cagliari, who open the gap.