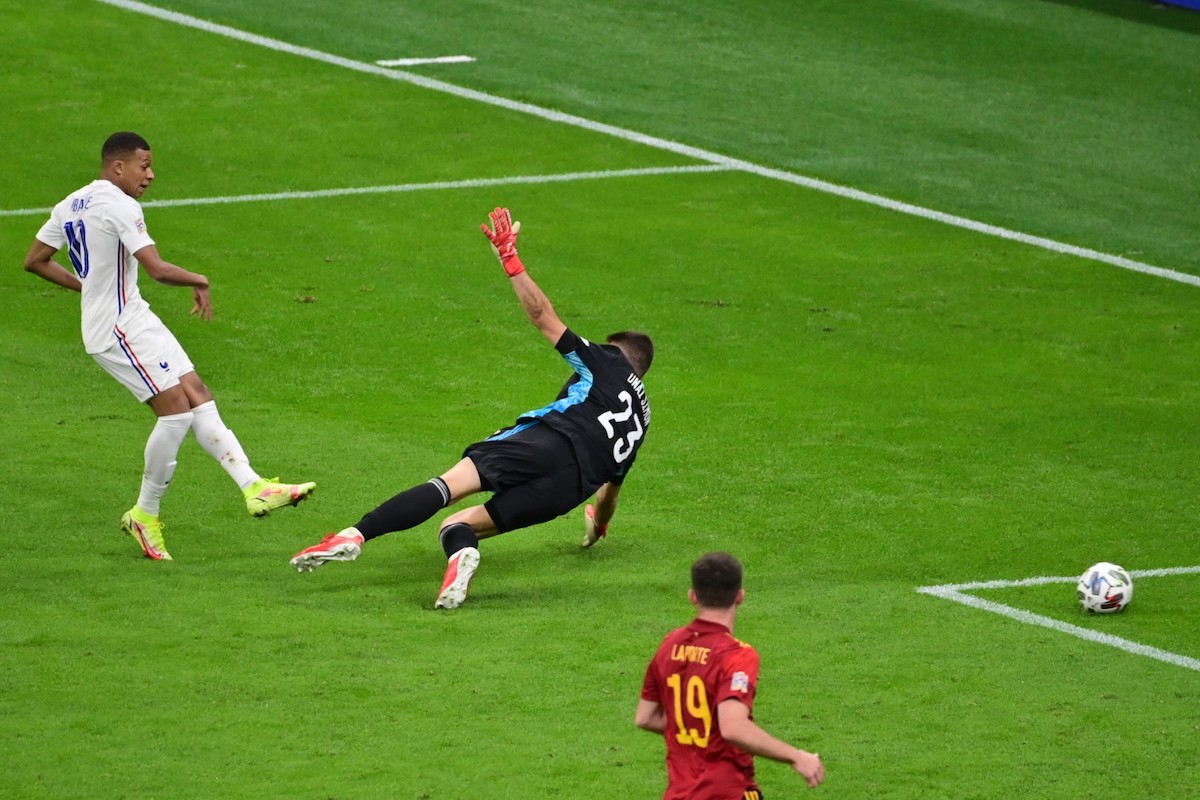 The goal that decided the League of Nations final between Spain and France is generating controversy. Eric Garcia deflects the ball before it reaches Mbappé, who is in an irregular position.

France won, this Sunday, the League of Nations after defeating Spain in the final 2-1. Until the first goal of the game, scored by the Spaniards in the 64th minute, through Mikel Oyarzabal, it was a calm game and without major incidents.

The French response did not take long and, two minutes later, Karim Benzema tied the match with a goal to lift the stadium.

At 80 minutes came the move that changed everything. Mbappé came unmarked from the Spanish defense and didn’t falter in the one-on-one with Unai Simón — firing coolly into the back of goal. The Spaniards asked offside, but even after the video referee’s analysis, the goal was validated.

The repetition leaves doubts, as the Paris Saint-Germain striker is, in fact, ahead of the last defender of the Spanish team.

Nonetheless, the fact that Eric García played the ball at the moment of the pass was decisive for bid evaluation. The defender touched the ball while making a cart to try to cut the ball.

To the newspaper Record, the ex-football player Marco Ferreira considers that the bid is totally legal.

“The defender’s deliberate movement towards the ball, and the consequent contact with it, validates the striker’s position. Controversial but well decided based on what is written in the law”, he sentences in declarations to the sports newspaper.

Law 11, relating to offside, states: “A player is not considered to take advantage of an offside position when he receives the ball from an opponent who has deliberately played the ball (except in a deliberate defense)”.

“Mbappé was out of the game, but the referee considered that Eric played the ball and that nullified the offside. That’s what he explained to us. You have to want to play the ball and Eric just wanted to cut it,” said Spanish international Sergio Busquets, quoted by the brand newspaper.

“I do not understand. The referee is there to decide. What I asked was that you go see the monitor. The offside is clear, but he argues that Eric has a chance to play. It is difficult for me to understand the position of the VAR”, lamented, in turn, Azpilicueta.

Eric Garcia, the defender who tried to cut the shot, said: “The ball is thrown to my back and I try to play it head-to-head with Mbappé who is out of play. The referee told me that I intend to play the ball. That’s the rule. It’s a play that is clearly out of the game, in which a defender never in his life can excuse himself from playing for the ball”.

“All of us who play soccer have seen that it’s offside. Whoever imposed this rule has never played football and doesn’t know what’s going on. Eric doesn’t want to play the ball, he wants to cut it. The referee understands that he wants to play. It is something that must change”, said Oyarzabal.