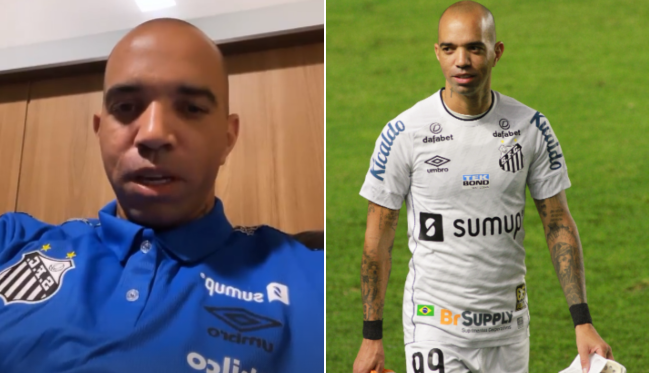 As if the painful setback in the quarterfinals of the Copa do Brasil were not enough, the veteran striker went through scenes of terror after leaving the stadium in Baixada Santista

the attacker Diego Tardelli made his debut on the professional team of Santos on the night of last tuesday, the 14th, in the 1-0 loss to Athletico-PR, in Vila Belmiro, as a result that decreed the elimination of Peixe in the quarterfinals of the Brazil’s Cup. As if the painful setback were not enough, the veteran went through scenes of terror after leaving the stadium in Baixada Santista. Through Instagram, the player revealed that he was chased to the hotel where he is staying and was threatened by about ten Santos fans. “What I want to tell you is a horror scene that I just went through, that I never went through in my life and I would never have imagined that one day I would go through it. I was arriving here near my hotel. I believe three or four cars were already following me. Until I stopped at the light and two or three cars closed me off. I had nowhere to run. They started to break my car, kick, dent. They said I was going to die. That torture they do when things don’t go well. This made me extremely sad, upset”, he said.

Even entering the course of the second half, Tardelli says he has suffered unusual attacks from Santos fans. “I believe they were, from what I saw quickly, counting high, around 10 people, fans. Ten vandals. Fans have every right to charge. The phase of the team is really not the best, but that doesn’t justify it. Unfortunately. Going through what I went through, during my 15-year career, it’s very sad to go through that. If you want to go to CT, anywhere to charge, to curse. But attacking, breaking a car, tackling terror… That doesn’t fit in football anymore”, said the attacker, who only managed to leave the ambush after a police intervention. “And it’s no use because there won’t be any punishment. Anything could have happened to me. There was no one on the side. The luck is that I found a policeman on the way to the hotel and they escorted me”, he concluded.

Diego Tardelli for Santos: 1 game, 27 minutes on the field.

Car broken by vandals who call themselves fans after an elimination for which the player was not to blame!

Note: this stupid attitude is not justified even if he was at fault in the elimination. pic.twitter.com/OpFp0jf4ps

Santos has not yet commented on the situation. It is a fact, however, that this is not the first episode involving attacks on professionals from Alvinegro Praiano in the year. At the beginning of the 2021 season, the then coach of the team, Ariel Holan, from Argentina, resigned after being threatened by fans at the door where he lived. Last Tuesday, part of the crowd went to the exit of the players’ locker room to protest.