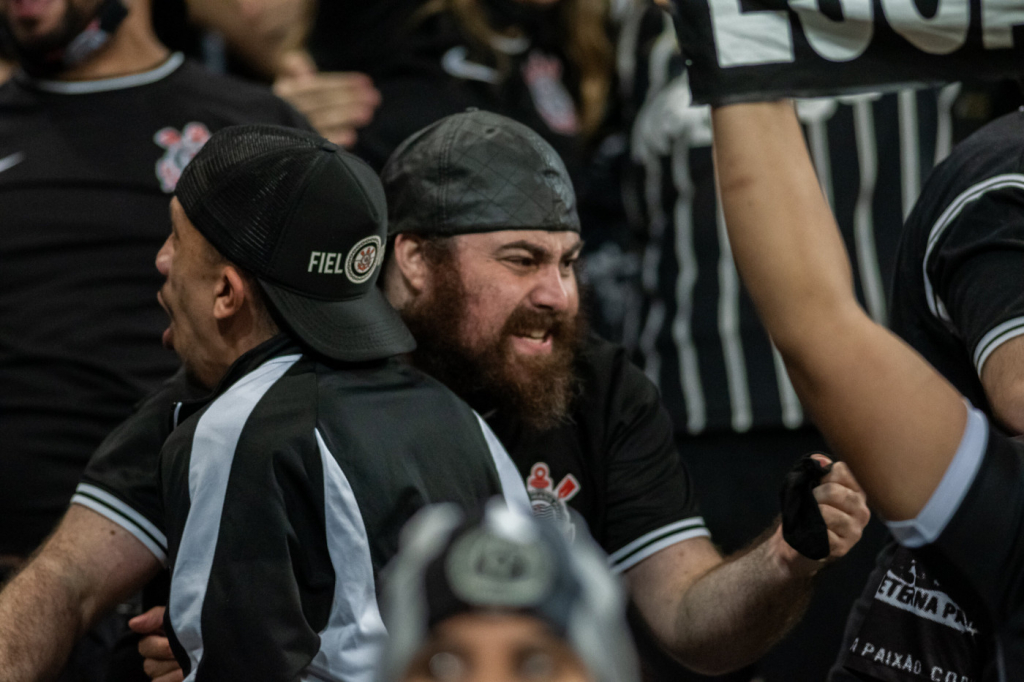 Both in Corinthians x Bahia, at Neo Química Arena, and in São Paulo x Santos, in Morumbi, fans managed to circumvent some guidelines established by the state government

JHONY INÁCIO/FRAME/ESTADÃO CONTENTWithout a mask, Corinthians fans embrace during the match against Bahia, for the Brazilian Championship

The first football matches with the return of the public in the capital of São Paulo did not have the sanitary protocol developed by the state government followed to the letter. so much in Corinthians x Bahia, at Neo Química Arena, and in São Paulo x Santos, at Morumbi, fans managed to circumvent some guidelines. Corintiano, Diego Dantas reported that there was no crowd to enter the stadium located in the neighborhood of Itaquera, but inspection gave loopholes. “For me, they asked for a vaccination card. Still, if you went with someone else’s ID and card, you could enter. This screening, which was carried out before passing the turnstile, was not the best possible”, said the cook.

According to the protocol, clubs are required to require a document that proves complete vaccination against the new coronavirus. For those who still received the two doses of the immunizing agent, it is necessary to present an antigen test within 24 hours before departure or PCR within 48 hours. In this regard, Caio Menezes, who is also from Corinthians, said he had not seen a problem. For the journalist, the problem was the lack of inspection regarding the use of masks inside the stadium, in addition to the crowding of fans. “There was no inspection of the use of masks or distancing, so many people were without masks all the time and out of marked places. There was a lot of crowding… Sometimes, a security guard asked the gang to separate a little, but they didn’t do more than that. They showed safety guidelines all the time on the screen and even asked people to cover their faces when sneezing or coughing, already anticipating that no one would wear a mask. In the northern sector, of the organized ones, everybody was really crowded, as in a normal game”, he commented.

The lack of distance between uniformed fans was also verified by sector reporter Giovanni Chacon, from Pan Youth Group, who was at the Morumbi stadium in the tie between São Paulo and Santos. “There was a rush outside, a difficulty due to lack of information due to check-in. Many people entered Morumbi already with the ball rolling, so there was this problem. Inside the stadium, most people were wearing masks, with the exception of the orange bleachers, where the organized ones were concentrated. There, an agglomeration was already expected. For the rest, the protocols were complied with”, he said. Unlike the Corinthians game, which had more than 10,000 people and sold most of the tickets available at home, the derby had low participation. According to Chacon, some factors did not encourage the São Paulo fans to go to the stadium. “The fans did not show up in weight because of the bureaucracy, the ticket price and also because of the schedule, which was not favorable. It was a fiasco, less than 6,000 fans,” he concluded.

This weekend, it will be time to palm trees e Santos, the other two big teams from São Paulo that dispute the Serie A of the Brazilian Championship, meet their fans again. Verdão receives RB Bragantino, this Saturday, 9th, at Allianz Parque, seeking rehabilitation from the tournament. Peixe, in turn, tries to get away from the relegation zone in a direct confrontation against Grêmio, on Sunday, 10, in Vila Belmiro. The capacity of fans at the stadium will only be changed next week, from the 15th, when clubs will be able to place 50% of the fans in their homes. As of November 1st, according to the governor João Doria (PSDB), the stadiums in São Paulo may be full.