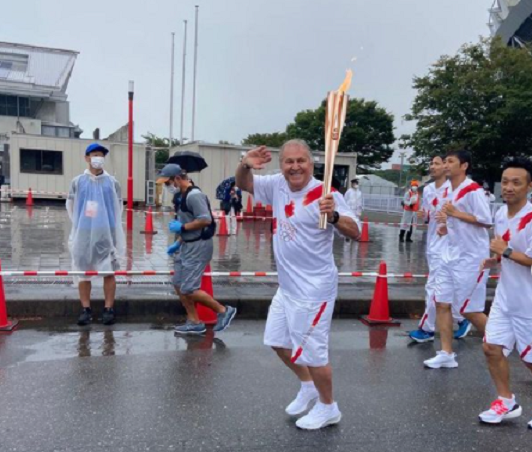 Zico, cheering idol of Kashima Antlers and of the Japanese, he was the Brazilian representative in the relay of Olympic torch last Saturday night, Sunday morning in Japan. Flamengo and yes Brazilian Team he was an honored guest and faced the rain with all the courage to walk through the streets of the city. You Olympic Games will be in Tokyo, three weeks from now, and he was very grateful after being “forgotten” at the Rio Games. “An unforgettable day in my life. Many things happened in my life when the Olympics came. I almost stopped playing football because I was cut, not because of the cut itself because every coach needs to have freedom to be called up, but because I was already having doubts about trusting people’s words. Then, in my country and in my city, I was denied this opportunity to carry the Olympic Torch. Today I fulfilled my dream of participating in the Olympics”, he wrote on his social networks.

“I thank Kashima Antlers, the city of Kashima and Japan for giving me this opportunity. I was moved and I can say that I calmly consider my sporting cycle that God has given me to be over. I ran alongside players I played with, Honda, and drove both in Kashima and in the Japanese national team, Nakata Koji, Takayuki Suzuki and Narahashi, who represented the Kashima Antlers so well. Here is my thanks to everyone who sent me messages of love and to the Japanese people for their respect and gratitude for my dedication to the development of Japanese football. Afterwards, I’ll post more photos and videos”, completed Galinho de Quintino, who was one of the pioneers in Brazil to venture into Japanese football, helping in the development of the sport in the country between 1991 and 1994 as the star of the Kashima Antlers. Recognized until today, Zico is the club’s technical director, serving as a scout and recommending young Brazilians to the club.

Today was the Brazil-Japan connection day in the torch relay #Tokyo2020 with “Zico San” from @Flamengo, Kashima Antlers, Brazilian and Japanese team carrying the Olympic flame.