The digitization of the field has vast space to be explored in Brazil: BNDES estimates state that the use of Internet of Things (IoT) in Brazilian agribusiness should move $ 21 billion by 2025. Until this goal is reached, there is “a lot of ground” ahead, but initial digitization movements are gaining more and more space in the country. A recent example is that of Fiagril, a company focused on supplying fertilizers to the agricultural sector, which invested R $ 600 thousand to collect data from producers and facilitate the management of the plantation area through an application, Confia Tech.

The company is not alone in its ambition to bring more productivity to the field through technology. Agrosmart, an industry startup, collects and analyzes data to irrigate plantations; and Agrosolutions has a system for managing rural properties, similar to the one implemented by Fiagril in its customers. Both gained space at EXAME recently (see here).

The fact is that, with the success of agribusiness in the country – the sector’s GDP increased by 24.31% in 2020, according to estimates from Confederation of Agriculture and Livestock of Brazil (CNA) and the Center for Advanced Studies in Applied Economics (Cepea) – interest in the sector’s digitalisation grows as more and more young entrepreneurs turn their gaze to the countryside.

The changes are also part of the restructuring process that the company has been going through since 2018. At the time, the company’s turnover was R $ 52 million, a very satisfactory result compared to the previous year, when it had a loss of R $ 10 million. Cost cuts were a priority and the company wiped out around R $ 25 million to achieve the result. In 2019, the revenue growth was 25% over the amount reached in the previous year. In 2021, the company estimates an increase of 37% on this result.

For this agribusiness veteran – who has been in the Brazilian market for 33 years -, the pandemic drove the need for innovation. The software deployed by the company, in addition to bringing more information to the producers’ daily lives, also works as a database for the company, which can make the offer of the right products for each producer, through joint strategies between agronomists of the company and the farmers.

“Our goal is to register one million hectares by the end of 2021. The project has been in operation since August last year and, since then, half of that objective has already been achieved. In addition to being something useful to producers, it also helps to bring us financial security when it comes to financing them or buying grains planted by these farmers, ”says Danish Sandri, Fiagril’s Planning and Execution Manager, to EXAME.

The app works as follows: from the field monitoring – which is done by 60 Fiagril consultants on their visits to producers, using only the cell phone – it is possible to obtain crop health reports in real time “in the palm of your hand. hand”.

In addition to the data, NVDI images (a standard that analyzes the condition of vegetation using remote sensors), allow you to view areas of heat, in which the red color may indicate that something is wrong and the green color that everything is right with that area.

With access to the information inserted in the tool, agronomic engineers responsible for bridging the gap between the fertilizer distributor and the farmers can plan actions and provide services tailored to the needs of each producer.

According to the company, all security for guaranteeing producer data is guaranteed and, over time, it should allow viewing a complete history of the actions taken on the property to identify seasonality.

For the company, the solution has the potential to represent only the initial kick-off of digitization with customers. “We have more than three decades of experience in the Brazilian market and we are committed to bringing more and more technology to the field. This is just the beginning of the level of digitalization that we want to achieve ”, says Dinamari. 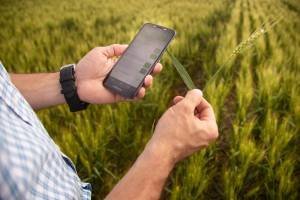 The startup behind this solution

None of this would be possible, however, without agtech (acronym to represent startups that operate in agribusiness) Integrated Agricultural Monitoring System (Sima), of Argentine origin, who arrived in Brazil in February last year.

“Brazil is two steps ahead of other countries in the region in agribusiness. Therefore, the competition is fierce here, but we have a clear focus of expansion in the country, especially for those who want to work with small producers. We want to be the company responsible for the first step in digitizing the field ”, says Maurício Varela, country manager at Sima.

For the company, this will only be possible by combining artificial intelligence with “collaborative intelligence”, a challenge that must be overcome to make better decisions – as producers get used to the advantages of the digital world. It is based on this thesis that the company should support itself for the round of investments that it must undergo in 2021, with the intention of raising between US $ 1.5 million and US $ 2 million.

After the consolidated habit of using digital tools to monitor day-to-day life, producers can take it a step further – how to measure the environmental impact their businesses produce.

This is already a reality for just over a third of Brazilian rural producers, who consider it highly strategic to measure the environmental impact of their businesses – and 47% say it is important to be more efficient in this aspect of management, according to a survey by PwC consultancy published by EXAME Of this month.

The digitalization movement is expected to bring more and more impact, given that projections point out that the demand for food should not decrease anytime soon. Participating in the forum Super Agro Brasil 2021, China’s ambassador to Brazil, Yang Wanming, said that agribusiness is one of the main pillars of the relationship between both countries, with half of the sales to the country being in agricultural exports – a scenario that is expected to continue in the coming years.

“There are not a few Chinese companies that they are interested in carrying out a joint operation with Brazilian producers, “he said.” This creates conditions for Brazil to have more options of access to finance, technology and equipment, “he said.