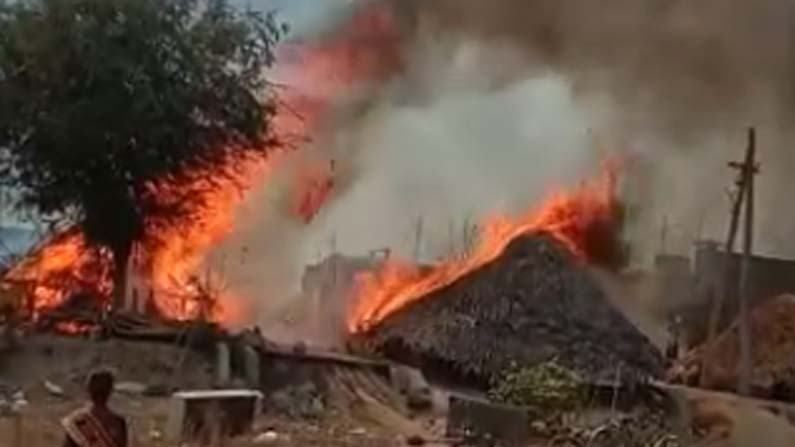 A fire accident …! 40 families fell on the road. Made hundreds of tribal poor homeless. Desirable, favorite, hidden, kept safe for many days

A fire hazard! 40 families fell on the road. Made hundreds of tribal poor homeless. Desirable, favorite, hidden, kept safe for so many days all burned together in the fire. The raging flames that spread rapidly, mixing with the air, left a lasting impression. We see the map on the screen. On the one hand, the rapidly spreading fires. The pain of their struggle is indescribable. There is no difference between small and big .. Everything was taken together and pulled out as it was received. Clothes, bed, gas cylinders .. whatever it looks like. He also lifted his unbearable weights awkwardly. Grabbed and ran away from the flames. The flames that erupted faster than their senses finally took away their joy as well.

We are talking about the Kondavanipalem fire in Vijayanagaram district Bondapalli mandal Devupalli area. Friday’s fire left a nightmare for the tribal poor. The fires, which started small in one house at first, engulfed 40 houses in an instant. The whole thing turned into a furnace of flames while watching. If we look at the visuals, it is clear that all the huts are in Puri and they are also adjacent to each other. Along with them, the fast blowing wind made the fires more intense. The victims were left in a state of helplessness, unable to stop the blazing fires, even though their legs were burning before their eyes. Small and large worked hard to protect their belongings. However, flames engulfed all the huts before some supplies could be taken out. The roof of the hut had completely dried up and collapsed within seconds of catching fire. Villagers rushed to the spot with information and put out the blaze. The damage had already been done. 40 families burned to the ground in difficult moments. The vertical shadow or 40 families fell on the road. No casualties were reported in the accident and all were pronounced dead at the scene. Officials who inspected the scene of the accident said there was heavy property damage. Authorities said they were investigating the incident.