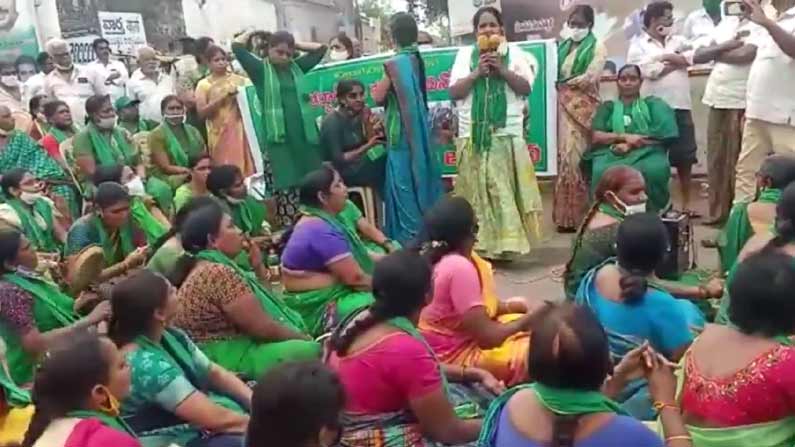 Amaravati protest: Amaravati women kicked. Once again they opened their cell to withdraw the three capitals. That is why Prakasam Barrage is to be staged

Amaravati protest: Amaravati women kicked. Once again they opened their cell to withdraw the three capitals. That is why the farmers who tried to stage the Prakasam Barrage were detained by the police in the villages. With the call of concern .. the vigilant police quelled their rage. With that the capital struggle once again led to tension. On the occasion of International Women’s Day, Amravati women staged a new type of protest. The women of Amravati called for a march on Prakasam Barrage to bring their movement to the attention of the world. Vigilant police conducted inspections in the villages of the capital from early morning. Picketing was arranged to prevent anyone from getting on the road. Women in riot gear stormed a rally on Friday, removing hundreds of protesters by truck. Police arrested the women on their way to the barrage and shifted them to Mangalagiri and Thadepalli police stations.

Tensions were high in the vicinity of Amravati till noon following the call for a parade. Attempts were made to move forward in some places wherever heavy cages were set up. Clashes and clashes broke out between the two factions in order to prevent them from doing so. Listen to Andhra Pradesh. Some farmers protested on the roads. Clashed with police. The freedom to protest was also debunked. Women left on the road at Mandadam Shivalayam Center. Drying out the manner of the police .. they chased the insecticide cans. Police were alerted and snatched pesticides from them, warning them to commit suicide en masse, including breakfast.

Some of the protesting farmers tried to enter the secretariat in Velagapudi. With that, the police were alert and prevented. Some of the women fell in the crowd during the sequence. Despite protests for a year, farmers complained that there was no proper response from the government.

Read also: Gold features: Prices are falling .. Is it the right time to buy gold? What if it stops?