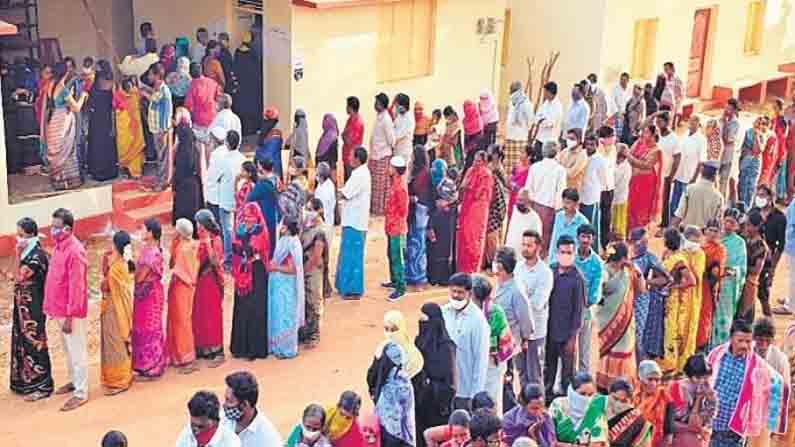 Sarpanch elections: The same scene in the Andhra Pradesh final installment rural war .. Fights in many places in the panchayat elections .. Feats abounded. The YCP-TDP faction moved to Bahabahi.

Political parties fight : Andhra Pradesh final installment is the same scene in the village battle .. Fights in many places in the panchayat elections .. Feats are boring. The YCP-TDP faction moved to Bahabahi. Competitive protests erupted at polling stations. The polling episode ended peacefully with police alert. In view of past experiences, the AP Gram Panchayat elections came to an end with the armed action of the police and election officials.

Activists of both the parties clashed in Rajugarlapadu, Sattanapalli mandal, Guntur district. There was a lot of talk about some people going into the polling booths. Quarreled with each other. This led to both sides, the police dispersed topulataku. Meanwhile, YCP-TDP clashes erupted in I. Polavaram in Mummidivaram constituency of East Godavari district. One was seriously injured in the sequence. Agents attacked each other in Itu Guntur district. The polling booth looked like a war zone. Many were seriously injured. Tension prevailed in the Thirty Zone of the same district. The YCP candidate who tried to enter the polling booth was blocked by TDP members.

Meanwhile, a controversy erupted over voting at the Krishnajilla Reddigudem polling station. TDP leaders expressed concern that a YCP agent had taken an old woman to a polling booth and cast her vote. This started the controversy. Police corrected both sides. Nellore: Two groups attacked each other near the polling booth of the old Ongallu Vaddi Palam in Kodavalur zone of Nellore district. The smoke erupted as one voted for the other.

Competing candidates clashed near the Sainagar Panchayat polling booth in Tirupati Rural Zone. This caused a slight tension. A scuffle broke out between activists of the ruling opposition parties in Vadampalli village in Yarragondapalem zone of Prakasam district. Both sides calmed down with the entry of the police.

Meanwhile, police lathicharged villagers who had gathered near a polling booth in Tatitur, Bhimili zone, Visakhapatnam district. One was injured in the sequence. Villagers protested against the attitude of the police. The agitation was subsequently withdrawn with the intervention of superiors. The injured man was rushed to hospital for treatment. A dispute has erupted between Sarpanch candidates at Aluru Main School in Kurnool district. Controversy erupted over sending voters to the center. TDP activists staged a dharna in front of Kosigi PS. They detained their leaders and were incensed that the police were acting unilaterally. Demanded that polling be postponed. The polling episode is over amidst total tensions.