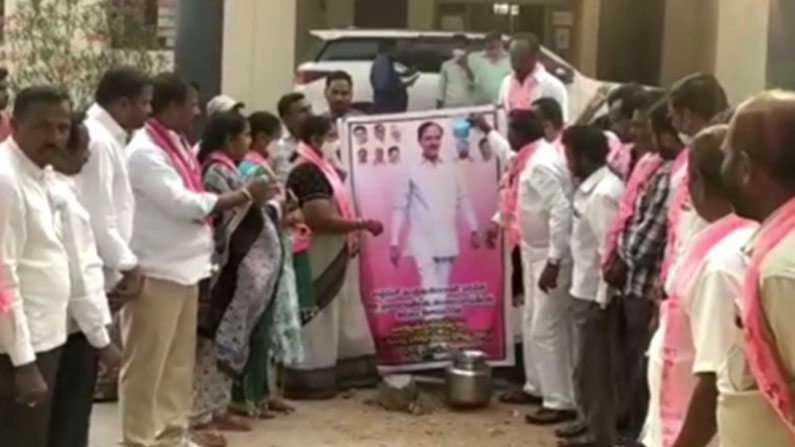 The Telangana state government has introduced the 2021-22 annual budget in the assembly. Revenue and Expenditure Estimates for Rs 2,30,825.96 crore have been proposed by Finance Minister Harish Rao. Introduced after a difficult time by Corona ..

The Telangana state government has introduced the 2021-22 annual budget in the assembly. Revenue and Expenditure Estimates for Rs 2,30,825.96 crore have been proposed by Finance Minister Harish Rao. The KCR government has given a big boost to welfare in this budget introduced after the Corona crisis. As part of this, there is a statewide outcry over the allocation of large sums of money to all sections and castes.

The allocation of Rs 500 crore to Zilla and Mandal Parishads in this budget has been hailed by all sections. During the function, CM KCR was anointed to paint at the local Mandal Parishad office in Janagam district center.

At Rajiv Chowrasta in the Palakurti constituency center, TRS party leaders hailed the budget introduced by the Telangana state government as acceptable to all sections. In Devaruppula, Kodakandla, Palakurti and Rayaparthi mandals of Palakurti constituency, CM KCR and Minister Errabelli Dayakar Rao anointed the film maps and celebrated by firing firecrackers.

He hoped that with the budget introduced by the Telangana government, justice would be done to the Sabbanda communities. KCR is the only Chief Minister who is working for the development of all sections. He was happy with the way the budget was prepared. He said it was gratifying that the government was moving ahead without compromising on welfare schemes. The TRS party ranks are happy with the budget introduced after Corona.

Farmers are happy with the budget’s emphasis on agriculture. He says agriculture will be further developed with more funds being allocated to the irrigation sector. There are no cuts in the schemes being implemented at present .. No tax cuts .. Huge allocations for the upliftment of SCs and STs .. In a word, it is said that the state government has brought forward the budget giving priority to the welfare of the farmer, the village and the town.

Despite Corona’s financial woes, the Rose factions are happy that CM KCR has become a savior to the people during difficult times. While prioritizing the medical and educational sectors, the CM said it was gratifying to launch a new scheme for the development of Dalits in the name of Dalit empowerment. All in all, there is support from all quarters for the Telangana budget. CM KCR is expressing his happiness by anointing the film.

Corona effect on the economic situation of Telangana .. However, a huge budget .. How much is allocated to any department ..

The graduates who stood on the side of TRS .. The rose army that came back to form in Telangana