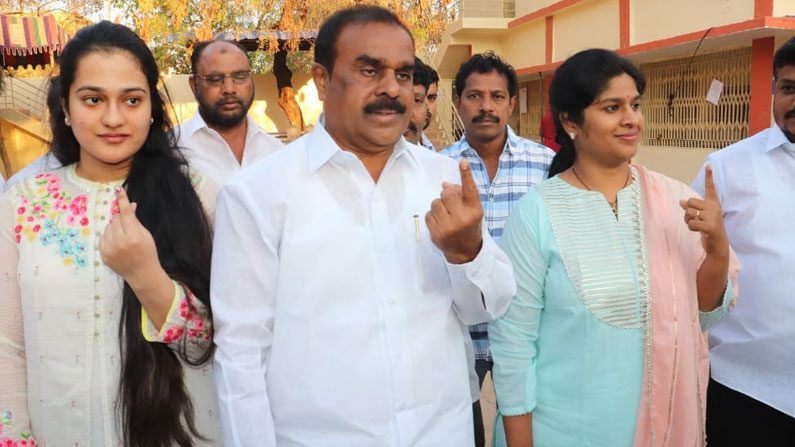 Municipal Elections: Voters consider the polling date of any election to be a holiday, even those who have campaigned wisely till then will stay away when it comes to polling. In a way, the uneducated are a little healthier than the educated in exercising their right to vote. Voters are tired of the tribe queuing for half an hour to cast their votes.

It is no exaggeration to say that educated voters are at least interested in coming out of the house and voting at polling stations. Many seniors, in particular, find it difficult to take responsibility for the right to vote, but it is ideal for many to stand in queues at polling stations and exercise their right to vote. But when the polling date comes, the youth will wander to other places. The right to vote was exercised recklessly.

However, a young woman is an ideal for lazy voters. Anantha Mahima reached America to Anantapur to exercise her right to vote and stood as an ideal for many. Vainam, who voted with his elder brother, MLA Anantha, surprised the voters there.

It is everyone’s responsibility to exercise the right to vote. The opportunity to change the writings of our leaders with a single ‘ink drop’ comes with a vote. Most people do not care to exercise their right to vote. “I like to vote. I will vote if I can. Otherwise I will not.” But a young woman who went to America from Anantapur for higher education .. came to vote in the city government elections. He said how much the vote was worth.

She is not someone .. Actually Ananthapuram MLA Anantha Venkata Ramireddy brother Anantha Subbareddy daughter Anantha Mahima. Arriving in Anantapur on Tuesday from America, she cast her vote along with her younger brother Anantha Venkata Ramireddy on Wednesday. Exercising the right to vote at the Nehru School on Court Road proved the value of the vote in a democracy. Infinite Glory urges everyone to exercise their right to vote for the betterment of our homeland and for the bright future of future generations.

AP Municipal Elections 2021: Governor-couple who voted .. What is the percentage of polling till 11 am ..