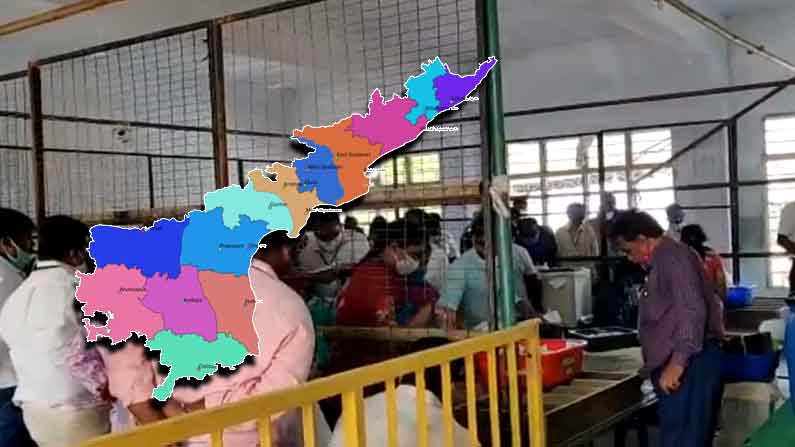 AP Municipal Elections 2021: YCP loses in Municipal Corporation elections in Andhra Pradesh. All the seats were won by YCP candidates. While the YCP bagged a high percentage in the election counting which lasted from morning till night, the TDP won in some seats. And here and there Janasena and others won. The latest Municipal and Corporation results were announced by the Election Commissioner.

YCP-1740
TDP – 278
Janasena- 23
BJP-08
Congress-02
CPI-02
Independents – 68
Eluru Corporation, on the other hand, did not conduct the counting of 47 divisions. Also Tirupati 7 ward election was not held. Candidates were drawn in 8 wards in Addanki.

YSSR CP is setting a new record in the municipal elections held in the state. YCP candidates are rushing towards clean sweep in corporations and municipalities. The YCP is in power in all the districts. TDP, BJP and Janasena are losing ground to fan aggression. No matter what, the YCP continues to dominate. The results of the Visakhapatnam municipality elections were dominated by the ruling YSR Congress party.

However, the TDP suffered a major setback in the municipal corporation elections. The party leaders remained silent after the results were revealed. There was an atmosphere of despair in the TDP party offices. The party also remained in despair. However, the TDP leaders did not expect the ruling party to go so far in this election. TDP leaders are commenting that although they thought that the ruling party would have some upper hand, they did not think that they would be left behind so much. The lack of positive results in Visakhapatnam and Vijayawada also further discouraged the TDP. Things like the sale of the Visakhapatnam steel plant and the relocation of the capital to Amravati are expected to have an impact in these two cities. Also, former minister Ganta Srinivasa Rao’s stagnation for some time has hurt his constituency. Many are commenting that the hopes we have placed on Visakhapatnam voters have not been fulfilled, even if it is a bit nimble compared to other cities.

TDP leaders also expressed concern over the counting of Visakhapatnam 89 ward. However, TDP leaders were alarmed when election officials earlier announced that the YCP candidate had won by a narrow margin over the ward. Officials were concerned that the false statement had been made and that their candidate would win. The recounting was carried out by the authorities as there was a large-scale concern that there would be no leaks until the recounting was done again. TDP candidate Ramesh won with 73 votes, officials said.

AP Municipal Elections: Responding to the results of the municipal elections, CM Jagan said that this is the reason for the historic victory.