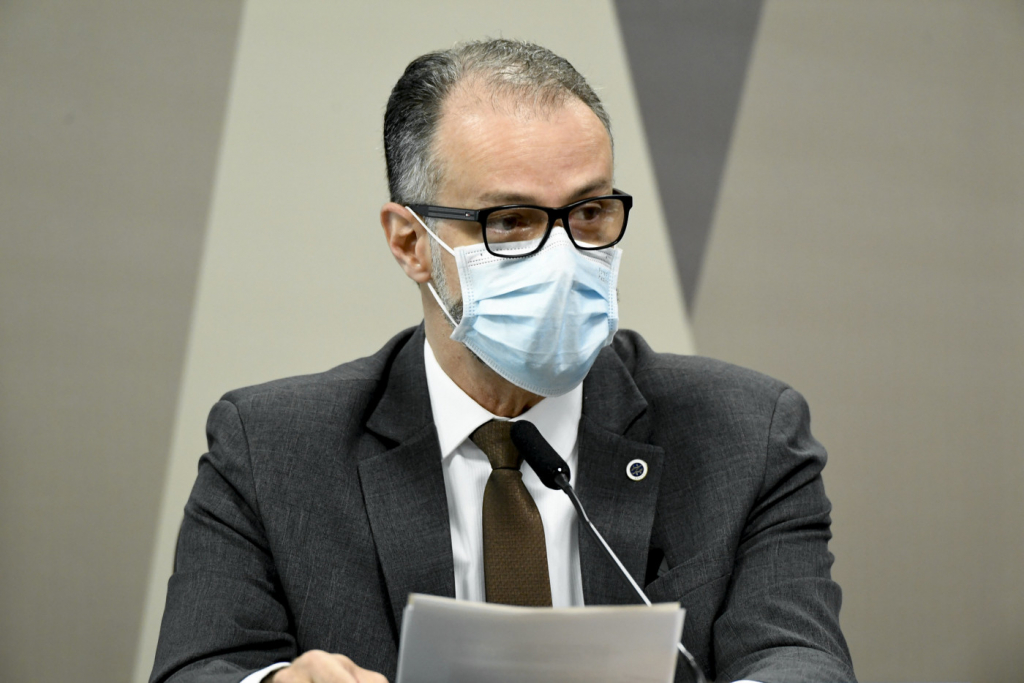 Anvisa’s president said he was against ‘any type of agglomeration’, defended a national immunization campaign and said that the proposal on the use of the medicine was made by Dr. Nise Yamaguchi

In his testimony to CPI to Covid-19, the CEO of the National Health Surveillance Agency (Anvisa), Antônio Barra Torres, distanced itself from the posture adopted by the president Jair Bolsonaro in the fight against the pandemic of the new coronavirus and confirmed the holding of a meeting, in the Planalto Palace, in which the alteration of the label of chloroquine was discussed, so that the drug was indicated for the treatment of the disease. According to the interviewee, the change in the bulbar was defended by Nise Yamaguchi, medical oncologist who has already been quoted to assume the Ministry of Health.

Last week, the former Minister of Health Luiz Henrique Mandetta stated that the proposal to change the label of chloroquine was vetoed by Barra Torres. “I remember [dessa reunião no Palácio]. I confirm that we were Braga Netto, from the Civil House, Minister Mandetta, myself, Dr. Nise Yamaguchi and a doctor whose name I do not remember. This document [minuta de decreto presidencial que previa a mudança da bula] was commented by Dr. Nise Yamaguchi, which provoked a reaction, I confess, a little inelegant. My reaction was very immediate, to say that it could not happen. Only the person who can modify a package insert for a registered drug is the regulatory agency of that country, as long as requested by the registration holder, ”he said. “When there was a proposal by an individual to do this, it caused a sudden reaction,” he added. Still on the meeting, Barra Torres said that the meeting was called by the then Minister of the Civil House, Walter Braga Netto, the current Minister of Defense.

Asked throughout his hearing about statements by President Jair Bolsonaro against vaccination and occasions when he promoted agglomerations and did not use masks, Barra Torres made a point of distancing himself from the head of the federal executive. Early in the afternoon, Senator Eliziane Gama (Citizenship-MA) asked the CEO of Anvisa about Bolsonaro’s motorcycle ride on Mother’s Day Sunday. “I am against any kind of agglomeration. I do not agree. Anything that talks about agglomeration, not using alcohol, not wearing a mask and denying the vaccine, are things that have no sense from the sanitary point of view ”, he replied. Torres’ response generated a reaction from Senator Humberto Costa (PT-PE). “If you did not have a mandate, you would not continue in office as of tomorrow,” said the PT. The CEO has a five-year term.

The decision that barred the import of the Russian Sputnik V vaccine against Covid-19 was also at the center of Tuesday’s testimony. On more than one occasion, senators have questioned the reasons on which the regulators ‘directors’ verdict was based. Alternate member of the commission, Angelo Coronel (PSD-BA) asked Anvisa technicians to authorize the application of the immunizer “from today to tomorrow”. “We can no longer wait, when we see a source of supply for our import needs, due to bureaucratic issues. I would like to make this appeal to you: meet with your technicians, to see if Anvisa gives this authorization, from today to tomorrow, so that this batch of vaccines from Sputnik V can be imported. If the human being in Argentina uses it and is not having a problem, I don’t see why not use it in Brazil. Especially because there is a law that covers Anvisa with subsidies even to protect itself against this import authorization ”, said the parliamentarian, referring to law 14.424, of March 2021, which provides for exceptional measures related to the acquisition of vaccines and supplies .

Senator Rose de Freitas (MDB-ES), in turn, questioned Barra Torres if, in her opinion, “Anvisa technicians know more than other countries” who approved the emergency use of Sputnik V. “There are 600 pages only about the replicating virus. There, the non-zero presence is well demonstrated. Vaccines are not meant to have replicating viruses, they have to be zero. The data that are shown in the documents of the Russians themselves show higher numbers, a number other than zero. That’s the placement, ”countered Barra Torres.